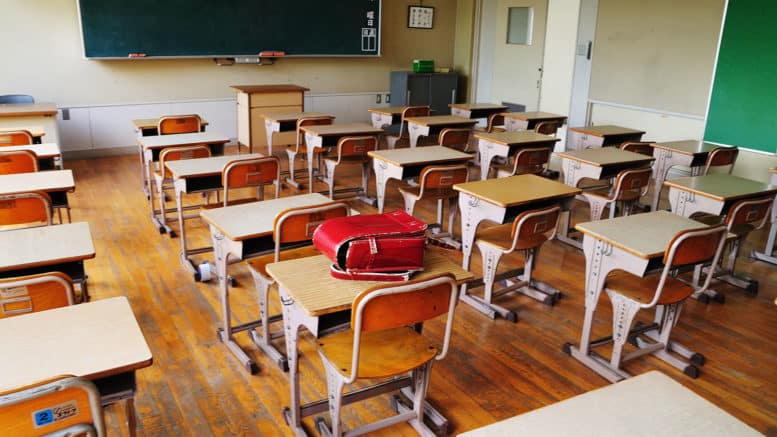 Please Share This Story!
PDF 📄
A Technocrat’s response to recent school shootings? Use facial recognition on everyone on the school property. In the case of New York schools, there has been a temporary delay in full implementation of the Aegis technology. ⁃ TN Editor

Next week, a school district in western New York will become the first in the United States to pilot a facial recognition system on its students and faculty. On Monday, June 3, the Lockport City School District will light up its Aegis system as part of a pilot project that will make it broadly operational by Sept. 1, 2019. The district has eight schools.

Superintendent Michelle Bradley announced the move on Tuesday, as first reported by The Lockport Union-Sun and Journal. Bradley described the test as an “initial implementation phase” meant to troubleshoot the system, train district officials on its use, and discuss proper procedures with local law enforcement in the event of an alert triggered by the facial recognition tech.

The Lockport pilot comes amid increased scrutiny of facial recognition’s efficacy across the US, including growing civil rights concerns and worries that the tech may serve to further entrench societal biases. Earlier this month, San Francisco banned police from using facial recognition, and similar bills in the US hope to do the same. Amazon has endured persistent pressure — including from its own shareholders — for its aggressive salesmanship of its facial Rekognition system to law enforcement agencies. Rep. Alexandria Ocasio-Cortez expressed concern that facial recognition could be used as a form of social control in a congressional hearing on the technology last week.

At the same time, reports and studies of facial recognition’s inaccuracies and mistakes — especially on women and people of color — continue to emerge.

Other schools have considered implementing facial recognition systems, but Lockport will be the first public school district to begin using the tech, the American Civil Liberties Union told BuzzFeed News.

BuzzFeed News has reached out to the Lockport City School District and the maker of the Aegis system for comment.

Lockport resident Jim Shultz, a vocal critic of the school district’s plan to use facial recognition, described the upcoming pilot as “a dicey move”: “I think the district is desperate not to begin another school year with their expensive system just sitting there,” he told BuzzFeed News.

In March 2018, Lockport announced its plans to install a facial recognition security system, which it funded through the New York Smart Schools Bond Act — an act meant to help state schools augment their instructional tech. But instead of buying laptops and iPads, Lockport submitted a proposal for a high-tech security system, and allocated much of the $4.2 million it was given toward adding dozens of surveillance cameras in the school and installing the facial recognition system Aegis, which is provided by Canada-based SN Technologies. To date, Lockport has spent $1.4 million to get the system up and running.

“Aegis is an early warning system that informs staff of threats including guns or individuals who have been identified as not allowed in our buildings,” stated an FAQ distributed to the school’s parents and obtained by BuzzFeed News. “Aegis has the ability [to screen] every door and throughout buildings to identify people or guns. Early detection of a threat to our schools allows for a quicker and more effective response.”

On Thursday, the New York State Education Department told BuzzFeed News it has asked Lockport to delay its use of facial recognition technology on students.

In an emailed statement, a spokesperson said, “The Department is currently reviewing the Lockport CSD’s privacy assessment to ensure that student data will be protected with the addition of the new technology. The Department has not come to the conclusion that the District has demonstrated the necessary framework is in place to protect the privacy of data subjects and properly secure the data. As such, it is the Department’s continued recommendation that the District delay its use of facial recognition technology.

I do not see how a facial recognition system would have prevented a single school shooting that has happened. None of the students who committed the shootings announced they were coming to school with a concealed weapon. This is nothing but an expansion of “Big Brother” surveillance. Print ’em and tag ’em with a SS number when they are born, and now they want to monitor everyone from cameras everywhere, license plate readers to follow you in your car, pinging the signal from your phone to identify your position as you move around, monitoring all electronic transmissions on the telephone… Read more »