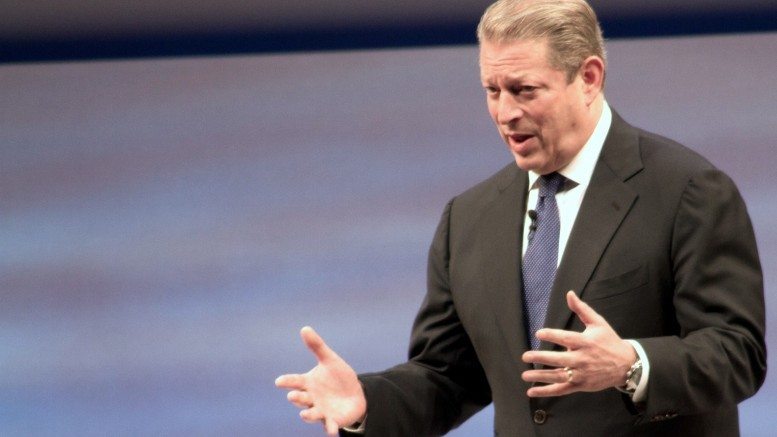 TN Note: All kidding aside, Al Gore’s 10-year old prediction of “no return” is worth no more than the CO2 that was expelled from his mouth when he said it. But Gore is only a player in the scam of global warming, getting rich in the process. His paternal organization, the Trilateral Commission is the real driver behind global warming in order to stampede the world into Sustainable Development, or Technocracy. The goal is to capture all means of production and consumption by capturing all the meaningful resources that the earth has to offer mankind. In those terms, it is the biggest scam of all time.

Fraud: Ten years ago Monday, Al Gore said we had only a decade left to save the planet from global warming. But Earth has been doing just fine. Why do we listen to this man?

While preening at the Sundance Film Festival in January 2006 during the premiere of his “An Inconvenient Truth” fib-umentary, Gore made his grand declaration. The former vice president said, in the words of the AP reporter taking down his story, that “unless drastic measures to reduce greenhouse gases are taken within the next 10 years, the world will reach a point of no return.” In Gore’s own words, he claimed we were in “a true planetary emergency.”

Ten years later, he’s probably hoping that everyone has forgotten about his categorical statement.

The terrible truth for Gore is that there is no planetary emergency. Not one of the dire predictions he and the rest of the alarmist community made has come to pass. In fact, there is plenty of evidence that they have been running a racket. Here’s how we know:

One, Earth hasn’t warmed in nearly 20 years. Yes, 2015 supposedly “smashed” the previous temperature record. But actually it was the third-warmest year on record — or maybe “not even close to the hottest year on record,” says James Taylor of the Heartland Institute.

The global average temperature, a devilish thing to determine anyway, depends on what temperature readings are being used and who is “adjusting” the data to fit their political purposes. The scientific community cannot be trusted to provide honest numbers. And 2015 was, after all, an El Nino year. Higher temperatures, with no link to man’s activities, were expected.

Two, predictions that climate change — the rebranding of “global warming” when it turned out that predicted warming wasn’t happening — would cause catastrophic weather damage haven’t panned out.

German insurance giant Munich Re says losses from natural disasters were lower in 2015 than in 2014 and lowest since 2009. The facts are sharply at odds with Gore’s 2012 claim that “dirty weather” caused by “dirty fossil fuel” has created “extreme weather” that “is happening all over the world with increasing frequency.”

Three, despite all the self-congratulatory international conferences and pseudo-agreements, the world has done nothing to “fight global warming.”