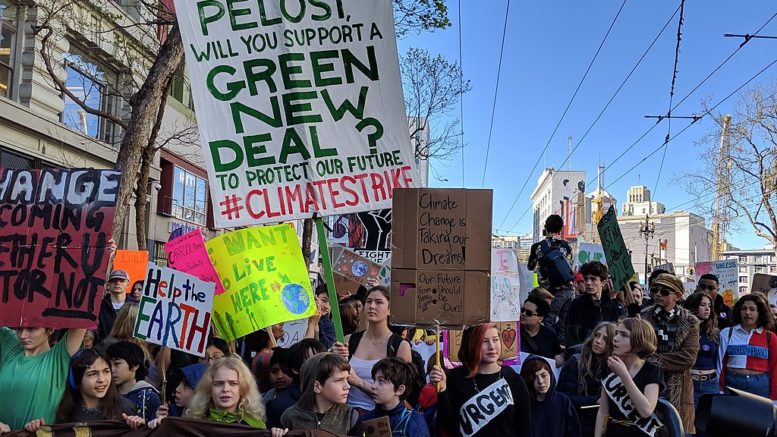 Please Share This Story!
PDF 📄
The real cancer on the U.S. economy is just the opposite: belief in climate change. This belief defies and denies the great body of legitimate science that overwhelmingly disproves global warming. ⁃ TN Editor

When Special Counsel Robert Mueller is testifying before Congress this Wednesday, Donald Trump will be the guest of a coal magnate in Wheeling, W.V. He will once again make the case for “big beautiful coal,” although the facts don’t bear him out: coal is failing at a faster pace under his watch than ever before.

It’s a pathetic con job: the president of the United States will promise demoralized coal miners that their way of life is just around the corner and that he is the “chosen one” to deliver them to the promise land. At the same time, he’ll mock climate change as a hoax while many parts of the United States and the global community are literally feeling the heat.

The honest message, of course, is that the world economy is changing. It is evolving from the industrial era when coal did reign to a greener era when electricity can be generated in a cleaner fashion using new technologies. Not only is coal in decline now but wind and solar are on the rise. Witness the fall in jobs in one sector and the upsurge in the other. But the bottom line is that if the United States wants to set the economic pace, it must invest increasingly more in green technologies. It will help curb global warming too.

“A Green Real Deal — if framed and focused properly — could wipe that smirk right off Trump’s face,” Tom Friedman writes, in a column for the New York Times. Friedman, who is also the author of Hot, Flat and Crowded, says that the global population is rising along with greater energy demand from an ever-expanding middle class, creating a void for some industrious country or business to invent the tools to fix the damages.

While 2030 is supposed to be the marker for the “point-of-no-return,” Friedman has subsequently argued that meeting this timeframe is probably too late. Case-in-points: Southeastern Africa got hit in March with one of the worst-ever cyclones and Australia’s Great Barrier Reef — one of the natural wonders of the world — is rapidly dissipating.

The global community is performing a balancing act by trying to access affordable fuels while also deploying more carbon-friendly energy sources. In this country, according to the Energy Information Administration,natural gas is displacing coal and comprises about 62% of all new generation. Wind and solar made up 21% and 16%, respectively, all in 2018. And coal is falling to its lowest use in decades, expected to be 24% of electricity production in 2019.

Consider American Electric Power that is located in Ohio and in the heart of coal country: it has said that it is closing one of the nation’s largest coal plants now in operation: 1,300 megawatts in Indiana. It is building, conversely, three wind projects totaling nearly 1,500 MW in Oklahoma.

Altogether, the Sierra Club says that 792 coal units have retired since 2010 while 487 are still running. S&P Global Market Intelligence estimates that 28,000 MW of U.S. coal-fired generation will retire before 2023, or about 85 plants. To boot: the U.S. Department of Energy said in 2017 that solar jobs are double that of those in the coal industry. Wind growth, meantime, is taking place in Texas, Oklahoma, Kansas, Wyoming, North Dakota and Iowa — all states that voted for Trump.

While Trump and other opponents of the Green New Deal are trying to characterize the proposal as a “socialistic,” it has yet to take shape. At its core, it aims to speed up what President Obama started — the New Energy Economy, by investing more in wind and solar technologies, electric vehicles, energy efficiency and smart grids that accommodate more green electrons.