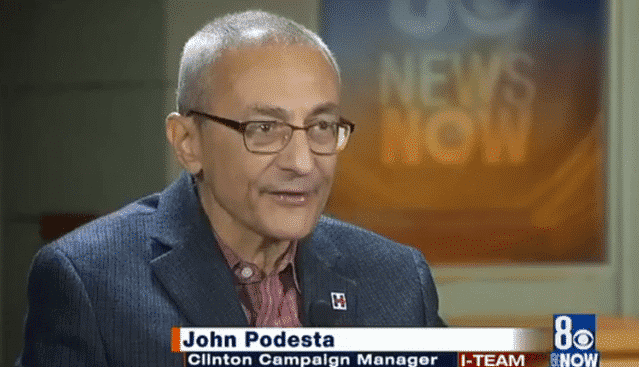 Please Share This Story!
PDF 📄
Beware! There could be no more dangerous climate zealot in the White House than John Podesta. He is/was the master architect of killing carbon-based fuels under Clinton and Obama. Former member of the Trilateral Commission, the champion of modern Technocracy. ⁃ TN Editor

President Joe Biden plans to bring in one of Washington’s biggest swamp creatures to help him allocate funds for climate change and green energy.

“His deep roots in climate and clean energy policy and his experience at senior levels of government mean we can truly hit the ground running,” Biden said about Podesta to the New York Times.

Podesta has been in Washington for decades, slipping in and out of past administrations, pulling the strings to gain enormous personal power and wealth.

As Biden’s advisor, Podesta will be in charge of allocating $370 billion in funding allocated in the so-called “Inflation Reduction Act” to green energy projects backed by some of Wall Street’s wealthiest liberal investors.

Podesta told the Times he would focus on the goal of transforming America away from oil and fossil fuels.

“The transformation of the energy economy is going to be the biggest thing economically that is happening in this country,” he said, promising to work to create “a future that is not blighted by the threat of climate change.”

Podesta is currently on the board of the leftist think tank Center for American Progress but will step down to take the position with Biden’s administration.

After serving as the former chief of staff to President Bill Clinton, Podesta founded a massive lobbying firm with his brother Tony Podesta but left to get involved in other political projects.

Most notably the chairman of failed presidential candidate Hillary Clinton, Podesta also served former President Barack Obama as a counselor to the president after Democrats got pummeled in the midterms.

Andrew Breitbart recognized Podesta as one of the biggest, most corrupt figures in Washington, D.C., repeatedly challenging him publicly.

“Fuck you, John Podesta,” he told journalist Dave Weigel in 2010, who then wrote for Slate. “What’s in your closet, John Podesta? Big Podesta? Big Soros? Do you want us to play these games? Because we’re playing to win.”

I fear the November election has already been stolen.

We’ll do best to keep praying. Without divine intervention. I don’t have any high hopes for November’s elections either. Wouldn’t surprise me if we didn’t have any more.

These people won’t go away. It would be too much to expect them to live their pathetic lives and leave the rest of the world alone.

Podesta started the Centre for American Progress with funding from the Sandler foundation and from Soros. He was co-chairman of President-elect Barack Obama’s transition team and Hillary’s campaign manager. Bad nes.

“As Biden’s advisor, Podesta will be in charge of allocating $370 billion in funding allocated in the so-called “Inflation Reduction Act” to green energy projects backed by some of Wall Street’s wealthiest liberal investors.”

Yet another mechanism for wealthy investors to make another financial killing while masquerading as advocates of ‘green’.

John thepoindexster is one goulish character if Ive ever seen one. Im curious to which synagogue of satan him and his goulish brother attend, lmao

What’s in Podesta’s closet is that he is a major pedophile, along with his brother.