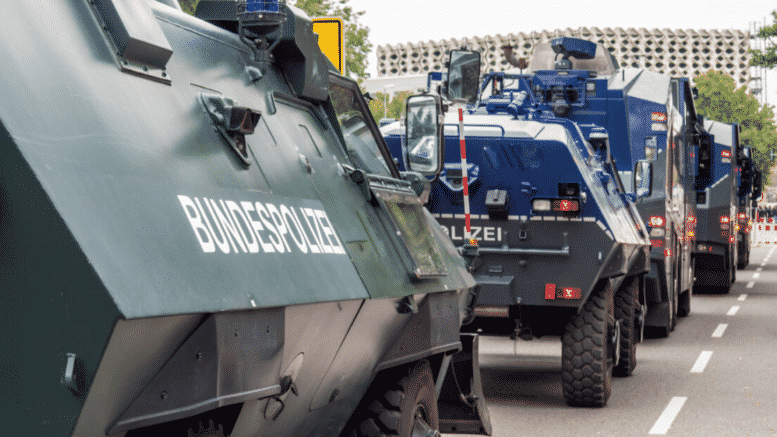 Posted By: Barbara Loe Fisher via The Vaccine Reaction November 25, 2020

German citizens against lockdowns, face masks and social distancing are taking to the streets by the tens of thousands, only to be met by violence from riot police with water canons and pepper spray. The war against reason is turning ugly. ⁃ TN Editor

German citizens protesting in Berlin on Nov. 18, 2020 against new more restrictive coronavirus lockdowns, masking and social distancing restrictions were dispersed by police forces using water cannons and pepper spray on the crowd of about 10,000. Whistling, chanting and banging saucepans while holding signs, most of the demonstrators were not wearing masks or social distancing, which the police said required them to engage in action to clear the streets of the people failing to obey social distancing regulations.

As helicopters flew above the crowd, some demonstrators threw fireworks, flares and other objects in response to being told to disperse by more than 2,000 police officers, including federal officers and others brought in from nine German states and several hundred protesters were arrested. A smaller demonstration in Frankfurt of about 600 people was also broken up by police using water cannons.

In Berlin, the protesters that included families with children once again gathered near the 18th century Brandenburg Gate, an iconic symbol of Germany’s reunification. The Brandenburg Gate, which is located near the Reichstag building that houses the German parliament (Bundestag), was the scene of massive public protests in August 2020 against coronavirus lockdowns and suspension of civil liberties.

The thousands of Germans who took to the streets last week were protesting a proposed amendment to the Infection Protection Act that would make it more difficult to legally challenge federal restrictions on autonomy and freedom of assembly that include store, restaurant, stadium and other public venue closings. Social distancing regulations primarily have been enforced at the state and local levels since government officials declared a coronavirus pandemic emergency last winter.

Holding signs that said “Pandemic of Lies,” “Infection Protection Law = Dictatorship,” “Truth, Freedom, Don’t Touch Our Constitution” and “No forced vaccinations,” the Irish Times reported that the protesters and several conservative politicians are opposed to the new amendment because it gives the current administration broader authority to impose “necessary protective measures” during the pandemic emergency declaration. Some have said it is reminiscent of the Enabling Act of 1933 that gave sweeping power to Hitler’s administration during the Nazi takeover of Germany’s government before World War II.

“Vaccination War: When will there finally be real resistance to corona terror and the impending greatest mass murder of all time?”- https://coronistan.blogspot.com/2020/11/impfkrieg-wann-formiert-sich-endet.html

Time to use force to fight for freedom… Does anyone know if those tyres on those military vehicles are bullet proof or if you could drive a spike threw one?

Rise Up.
FREEWILL for All citizens