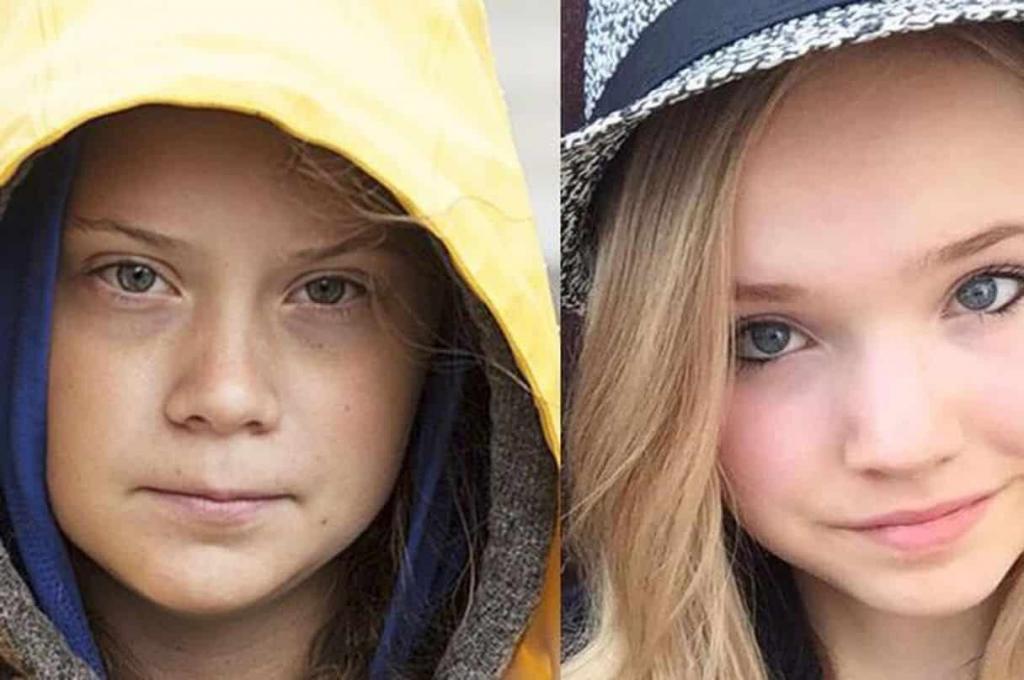 Naomi Seibt is the non-alarmist counterpart of hysterical Greta Thunberg. Naomi brings logic and facts to the table on climate change and encourages people to think, but she is the one who German authorities want to throw in jail. ⁃ TN Editor

The response to our appeal for Naomi Seibt has been splendid – but more of us need to help her, because the State Media Authority in North Rhine Westphalia, in the hope of interfering with Naomi’s right to post YouTube videos critical of the Party Line on climate, have menaced her not only with two enormous fines and two sets of costs but also with prison.

Naomi really, really needs our help. If you have already donated, many thanks for your generosity. More than $1000 a month has been pledged in just 24 hours. Keep it coming – she’ll need every penny. Just donate to Naomi directly. Do it now, if not sooner.

Naomi’s defense lawyer has already scored one success: the Authority has been compelled to abandon its campaign to force her to take down the first of the three videos it has complained of, because she made it long before she had met anyone from the Heartland Institute, which the Authority dislikes because they regard her single mention of it in one of the three videos complained of as constituting “product placement”, contrary to the anti-free-speech law of North Rhine Westphalia, where she lives.

Though the two videos of which the Authority continues to complain would constitute a first offense – Naomi is only 19, after all, and cannot be expected to have known that free speech had been shut down in her part of Germany by an obscure and inspissate law – the Authority is trying to make her pay a fine of 1000 euros plus another 200 euros costs for each of the two videos: total 2400 euros. If she doesn’t pay, this is the threat these wretches have made:

I WANT YOU TO THINK

Welcome to the Heartland Institute 2020

Hello, everyone. My name is Naomi Seibt and I am a new member at the Heartland Institute. And I’ve got very good news for you. The world is not ending because of climate change. In fact, 12 years from now we will still be around, casually taking photos on our iPhone 18s, Tweeting about the current President on Twitter and ranting about the latest celebrity gossip. However, we are currently being force-fed a very dystopian agenda of climate alarmism that tells us that we as humans are destroying the planet and that the young people especially have no future: that the animals are dying, that we are ruining nature.

I truly believe that many members of Antifa, Fridays for Future groups, Rebellion Extinction, I really believe that many of them have good intentions but they are genuinely scared of the world ending, and scared that their parents and grandparents are ruining the planet, that it’s breaking relationships, it’s breaking up families, and we at the Heartland Institute, we want to spread truth about the science behind climate realism, which is essentially the opposite of climate alarmism.

Many people are now actually developing mental disorders, and referring to it as eco-anxiety and eco-depression. And I believe it is important that we act now and change this entire mainstream narrative of fear-mongering and climate alarmism, because it’s basically just holding us hostage in our own brains.

With all of that said, don’t let an agenda that is trying to depict you as an energy-sucking leech on the planet get into your brain and take away all of your passionate spirit.

Would you inflict a fine of 1000 euros plus 200 euros costs, or up to two weeks’ jail in lieu, for that short, harmless video that does little more than announce to Naomi’s 46,000 subscribers that she was going to work for the Heartland Institute? This was a first “offense” – if “offense” were the right word, which of course it is not. Would you imprison a teenager who had not actually said or done anything wrong, except to exercise her right of free speech in terms of the European Human Rights Convention? No. But welcome to today’s Europe.

Here’s the full text of the second video, which doesn’t mention Heartland at all. It is a speech that Naomi gave in Germany. Heartland had absolutely nothing to do with it, did not pay for it and did not influence the content in any way. Much of the material, including data and even some direct quotations, came from a speech that Naomi had heard me give in Munich a few weeks previously:

Manmade climate change has become a topic so unquestionable that everyone who dares to express even just a hint of scepticism is immediately labelled a “Climate Denier”. And, out of all people, it is the ones who tend to call us “Nazis” who fail to realize that this is a truly disgusting way to mock the severity of the Holocaust. I personally prefer the term “Climate Realist”. [Applause]

But why should you, in the context of such a profound and scientific topic, listen to some girl with long blonde hair giving a speech? And – yes, exactly – this question, “Why are you listening to a young girl?”, is the same question that I ask the people who go out and protest for Fridays for Future every single week,as Greta-worshippers.

And this is why I ask you not to believe every word I say unconditionally, but to give me a chance to speak, to listen carefully, and then to continue doing your research and form your own opinion on the climate change situation and any other political topic. I can be wrong sometimes. Don’t create an ideology out of something that a young girl has to say, regardless of the political side she’s on.

All the predictions that the IPCC, which you have probably heard of before, has published since 1990 have not been supported by the empirical evidence. In the last copule of decades global warming has been way less severe than initially foretold by the IPCC. They calimed that we would have tro expect a third of a degree of global warming per decade. Well, that prediction failed, so they are now calling it “Climate Change” instead of “Global Warming”. On top of that, they overestimated the magnitude of global warming even despite the fact that CO2 emissions have been increasing more than anticipated by the IPCC – which shows us just how successful all those political “Climate Conferences” with their CO2 reduction goals have been in recent years.

Moreover, all hypotheses that the IPCC has put out there are entirely based on climate models. So this means that they come up with lots of climate-related variables that they think will have an effect on global warming. But in reality those variables cannot possibly describe climate processes accurately, because the climate is way too complex to be depicted by a computer model. We have to consider so many factors, such as the makeup of the Earth’s surface, feedback responses, from water in all of its aggregate phases, mechanisms in the atmosphere – and what about the Sun? Has anyone considered the immense impact that the Sun has on the climate in comparison to manmade CO2 emissions?
The IPCC’s climate models predict that you get a warming effect of 4.1 degrees per doubling of CO2 concentration in the atmosphere. However, when we apply the reverse calculation with real temperature data since 1850, we will find that CO2 emissions only account for 1.4 degrees of actual extra warming. So that means that those climate models are calculating with amplifying factors that artificially inflate the global warming prognoses.

But what is so dangerous about all of this is that we are now doing real politics with this fictional science – and that does not work. [Applause]

Man overestimates his power if he thinks that his plastic straw could have any significant effect at all on the climate. Furthermore, it is incredibly primitive to confuse “climate “ with “weather” in the same breath, which is what most people do. This overestimation of Man’s power leads to a hysterical implementation of climate policies and we must not tolerate such an impulsive reaction because the consequences for our society will be detrimental. We know that.

The scientific scepticism of climate alarmists fails in the face of even the most simple questions: What is the ideal global mean surface temperature for the Earth? [Applause]. Has anyone ever given you an answer to that question? And if not, that means that we don’t even have any kind of foundation upon which we can base an evaluation of the repercussions of global warming. Perhaps global warming isn’t even that detrimental. But as long as we don’t answer simple questions, we cannot tolerate impulsive political reactions. [Applause] And this is exactly what becomes evident: it is not about science. It is all about politics. It is about the suppression of scepticism. It is about the suppression of free science and free speech, and that’s why we have to fight back. [Applause]

And they all worship Greta, a young and innocent, but als an utterly immature and uneducated girl who is being shamelessly taken advantage of for the perfidious agenda of climate hysteria. And this is why I want to make this very clear: I am not the anti-Greta. Because that is exactly the label that those protesters outside want me to embrace, so that they have another scapegoat whom they can put in a simple box with the rest of their adversaries.

Instead, by misrepresenting us in the media, chanting malicious slogans to defame us and prohibiting us from making public appearances, they want to strip us of every opportunity to speak up, because our words and free thoughts are a threat to those whose world-views are no more than an ideological complex on shaky foundations. [Applause]

No, I am not “Anti-Greta”, and we are not “Climate Deniers”. We must not let anyone degrade us and make us members of the controlled opposition. For we have our own positive ambitions, ideas and qualities. We are not “Anti-Nature”, but “Pro-Science, “Pro-Innovation”, “Pro-Sensible Environemtnal Policies”; and, most importantly, we are “Pro-Human”. [Applause]

The true Anti attitude belongs to the enemies of reason – the proponents of anti-humanism. [Applause]

We are not parasites on the planet. For hundreds of years we have been exploring, researching, inventing and building for a healthier, better and freer society. We must not put ourselves into a tight strait-jacket of overtaxation. We must not deny to ourselves, nor to the people from very poor third-world countries, access to cheap and reliable energy. We must not take away the young generation’s hope for a good future and drive them into an eco-depression. [Applause]

So please do not leave this event with a profound rage against Greta or the protesters or even the media who might want to depict us as Climate Deniers or radical right-wing egoists. It’s time we put an end to this depressing “Anti” attitude. Rage and panic belong to our opponents. [Applause]

Some commenters on my first piece about this burgeoning international scandal could not quite believe that fines – and, as it now turns out, menaces of imprisonment – could possibly have been issued in what is supposed to be a democratic country without any court hearing. But that is exactly what happened.

Worse, when the Authority demanded that Naomi should reply to its original letter, it gave her a frighteningly short time to reply in detail. Yet she had been very ill with an ailment that came quite close to proving fatal, so her lawyer wrote to ask for more time. The Authority paid no attention and issued the demand for fines and costs regardless.