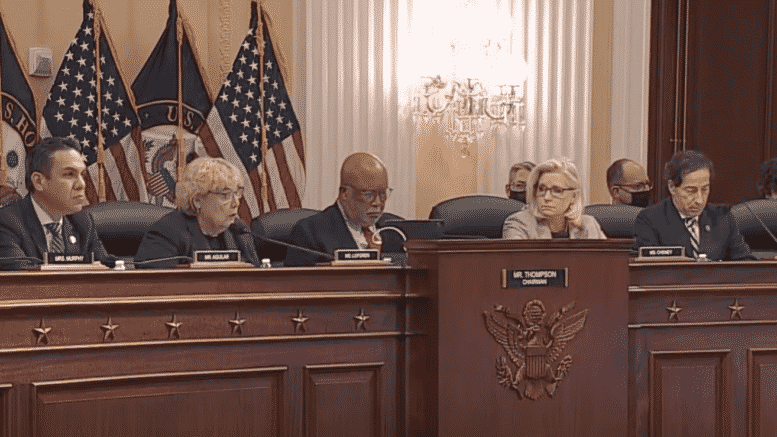 Please Share This Story!
PDF 📄
As the Rule of Law breaks down in America, despots and tyrants quickly fill the vacuum, as evidenced by the Congressional 1/6 Investigative Committee. Lawlessness exhibits itself when elected officials reject legal constraints and authority and bully their way through to get what they want. This sets a precedent for other government officials to follow suit. ⁃ TN Editor

In its ongoing attempt to investigate and gather information about private U.S. citizens, the Congressional 1/6 Committee is claiming virtually absolute powers that not even the FBI or other law enforcement agencies enjoy. Indeed, lawyers for the committee have been explicitly arguing that nothing proscribes or limits their authority to obtain data regarding whichever citizens they target and, even more radically, that the checks imposed on the FBI (such as the requirement to obtain judicial authorization for secret subpoenas) do not apply to the committee.

As we have previously reported and as civil liberties groups have warned, there are serious constitutional doubts about the existence of the committee itself. Under the Constitution and McCarthy-era Supreme Court cases interpreting it, the power to investigate crimes lies with the executive branch, supervised by the judiciary, and not with Congress. Congress does have the power to conduct investigations, but that power is limited to two narrow categories: 1) when doing so is designed to assist in its law-making duties (e.g., directing executives of oil companies to testify when considering new environmental laws) and 2) in order to exert oversight over the executive branch.

What Congress is barred from doing, as two McCarthy-era Supreme Court cases ruled, is exactly what the 1/6 committee is now doing: conducting a separate, parallel criminal investigation in order to uncover political crimes committed by private citizens. Such powers are dangerous precisely because Congress’s investigative powers are not subject to the same safeguards as the FBI and other law enforcement agencies. And just as was true of the 1950s House Un-American Activities Committee (HUAC) that prompted those Supreme Court rulings, the 1/6 committee is not confining its invasive investigative activities to executive branch officials or even citizens who engaged in violence or other illegality on January 6, but instead is investigating anyone and everyone who exercised their Constitutional rights to express views about and organize protests over their belief that the 2020 presidential election contained fraud. Indeed, the committee’s initial targets appear to be taken from the list of those who applied for protest permits in Washington: a perfectly legal, indeed constitutionally protected, act.

This abuse of power is not merely abstract. The Congressional 1/6 Committee has been secretly obtaining private information about American citizens en masse: telephone records, email logs, internet and browsing history, and banking transactions. And it has done so without any limitations or safeguards: no judicial oversight, no need for warrants, no legal limitations of any kind.

Indeed, the committee has been purposely attempting to prevent citizens who are the targets of their investigative orders to have any opportunity to contest the legality of this behavior in court. As we reported in October, the committee sent dozens if not hundreds of subpoenas to telecom companies demanding a wide range of email and other internet records, and — without any legal basis — requested that those companies not only turn over those documents but refrain from notifying their own customers of the request. If the companies were unwilling to comply with this “request,” then the committee requested that they either contact the committee directly or just disregard the request — in other words, the last thing they wanted was to enable one of their targets to learn that they were being investigated because that would enable them to seek a judicial ruling about the legality of the committee’s actions.

But now the committee is escalating its aggressive investigative actions. They have begun sending subpoenas to private banks, demanding the banking records of private citizens, and doing so such that either the person never finds out or finds out too late to obtain a judicial order about the legality of the committee’s behavior. In one case, they targeted JP Morgan with these subpoenas while knowing that that bank is being represented by former Obama Attorney General Loretta Lynch; Lynch — unsurprisingly — then directed her client not to accommodate any requests from its own customers to ensure they can seek judicial review.

On November 22, the 1/6 Committee served a subpoena on Taylor Budowich — a former spokesman for the Trump campaign who never worked for the U.S. Government — that requested a wide range of documents as well as his deposition testimony. On December 14, Budowich voluntarily complied by handing over a large amount of his personal records, and then, on December 22, he flew to Washington at his own expense and submitted to questioning. There is no suggestion that Budowich was engaged in any violence or other illegal acts at the Capitol on January 6. Their only interest in this private citizen is his connection to the Trump campaign and his stated view that he believed the 2020 election was marred by fraud.

After he furnished the committee with those documents and then testified, Budowich learned from others that the committee was issuing subpoenas directly to the banks used by other individuals for their personal accounts. He thus requested that his lawyer notify his own bank, JPMorgan Chase, that he would object to their cooperation with any subpoena without first providing notice to him so that he can have time to seek a legal ruling in court.

Typically, citizens learn when law enforcement agencies such as the FBI serve subpoenas to third-party providers such as banks or internet companies. That allows a crucial right: to contest the legality of the action in court before the documents are supplied. But when such a subpoena is concealed from the person, it prevents them from obtaining judicial review. In general, citizens learn of FBI subpoenas, and the FBI (with rare exceptions) has the power to impose a “gag order” or otherwise prevent the person from learning about it only if they first persuade a court that such an extreme measure is warranted (by arguing, for instance, that a terror suspect will flee or destroy evidence if they learn they are being investigated). That safeguard ensures that in most cases, a citizen has the right to seek judicial protection from an illegal act by an investigative body.

But the 1/6 Committee recognizes no right of any kind and no limits on its power. On November 23 — the day after it served a subpoena on Budowich himself — it served a subpoena on Budowich’s bank, JPMorgan. The original date for the bank to produce the records was December 7, but JPMorgan — advised by Loretta Lynch as its legal counsel — bizarrely requested that the deadline be extended until December 24: the day before Christmas, knowing that courts would be closed that day and the next. It was only on December 21 — when Budowich was in Washington for his testimony before the committee — did JPMorgan send him notice at his home that it had received a subpoena and intended to produce the requested documents on December 24: just three days later. As JPMorgan and Lynch knew would happen, Budowich did not see the letter until he arrived home on the evening of December 22: less than forty-eight hours before the bank told him they were going to give up all of his financial records to the committee.

Upon discovering that the committee had subpoenaed his bank, Budowich’s lawyers immediately advised JPMorgan that they had legal objections to the subpoena, and requested that — given it was about to be Christmas Eve and the courts would be closed — the bank seek an extension from the committee to enable Budowich to seek a judicial ruling. But the bank, advised by Loretta Lynch, refused — and told him they intended to turn the documents over on Christmas regardless of whether that gave him time to request judicial intervention. The bank even refused to provide a copy of the subpoena they received from the committee, which Budowich, to this very day, has not seen.

Budowich’s lawyers did everything possible to seek judicial intervention before JPMorgan gave all his financial documents to the committee, but the timing agreed to by the committee, Lynch and the bank — documents produced on Christmas Eve, with notice to him arriving just a couple days before when he was testifying in Washington — made it impossible, by design. As a result, JPMorgan gave all of his banking records to the committee without even seeking an extension.

Budowich was therefore left with no alternative but to file an after-the-fact lawsuit against House Speaker Nancy Pelosi and the committee members, seeking an emergency injunction against the committee’s use of his banking records. In response, both the committee and JPMorgan argued that the entire question was “moot” given that they already handed over the documents.

In other words, lawyers for the committee and Loretta Lynch created a plot whereby JPMorgan would notify Budowich of its intent to hand over the documents right before Christmas, so as to purposely deny him time to seek a court ruling, and then used the fact that he was “too late” in filing as a ground for arguing that the court should shut its doors to him and refuse to even give him a hearing. The court agreed that Budowich’s request for an emergency injunction was “moot” given that the bank already supplied the documents, but agreed to rule on the merits of the arguments about whether the subpoena was legal.

The parties’ briefs on this question were submitted to an Obama-appointed federal judge, James Boasberg, in Washington. The oral argument on Budowich’s request to enjoin the use of his banking records by the committee was held earlier on Thursday, and Judge Boasberg quickly rejected Budowich’s objections to the subpoena. It will now be appealed to the Court of Appeals, but the issues presented by the committee’s arguments are chilling.

At the hearing, the committee’s lawyers essentially repeated the same argument they advanced in their legal brief: namely, that none of the legal safeguards imposed on the FBI and other law enforcement agencies to guard against abuse of power apply to this Congressional committee, which therefore enjoys virtually absolute power to do what it wants.

Prophecy: Then shall they deliver you (Jews & Christians) up to be afflicted, and shall kill you: and ye shall be hated of all nations for my name’s sake. And then shall many be offended, and shall betray one another, and shall hate one another. And many false prophets shall rise, and shall deceive many. And because iniquity shall abound, the love of many shall wax cold. But he that shall endure unto the end, the same shall be saved. And this gospel of the kingdom shall be preached in all the world for a witness unto all nations; and then shall the end come.… Read more »

All of them are on the take to the central banks. No honest people here.

I guess one is guilty by association now. Apparently, trying to keep your nose clean isn’t good enough anymore. Sort of like the covid narrative. Guilty and never proven innocent.

You could put a stop to the overreach and the bullying by enforcing the constitution. If you won’t enforce it, what do you expect.