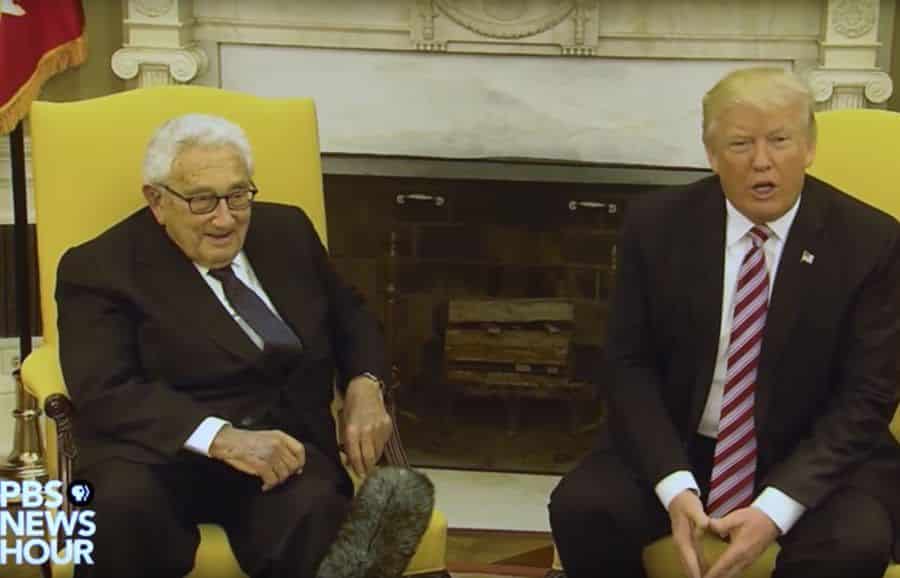 What is Henry Kissinger doing meeting with President Trump in the Oval Office? His meeting was not on the President’s public schedule, which means that it was an impromptu meeting. In the past, Trump has bragged about his friendship with Kissinger. Kissinger was a founding member of the Trilateral Commission in 1973, and a close confidant of the late David Rockefeller. ⁃ TN Editor

President Trump invited the press into the Oval Office Wednesday for photos and brief questions with a guest that shocked many of the reporters in attendance: Henry Kissinger, the controversial former secretary of State and official in the Nixon and Ford White Houses.

Earlier in the morning, Trump met with Russian Foreign Minister Sergey Lavrov and Russian Ambassador Sergey Kislyak — a choice many found shocking in light of Tuesday night’s firing of FBI Director James Comey, whose bureau is investigating ties between the president’s campaign and Russia.

Asked in the Oval Office meeting with Kissinger about the Comey termination, Trump said, “He wasn’t doing a good job. Very simple. He was not doing a good job.” (For more information on this and other political stories, subscribe to the White House Patch for daily newsletters and breaking news alerts.)

“With all the comparisons the Nixon era, Trump brings the press into the Oval to see him sitting w/ a key member of the Nixon administration,” tweeted Bloomberg and pool reporter Jennifer Epstein who attended the meeting.

The meeting with Kissinger was not on the president’s public schedule, and reporters thought they would be entering the meeting with Lavrov when Trump invited them in the office.

He added that his meeting with Lavrov was “very, very good.” Both sides, he said, want to end “the killing — the horrible, horrible killing in Syria as soon as possible and everybody is working toward that end.”