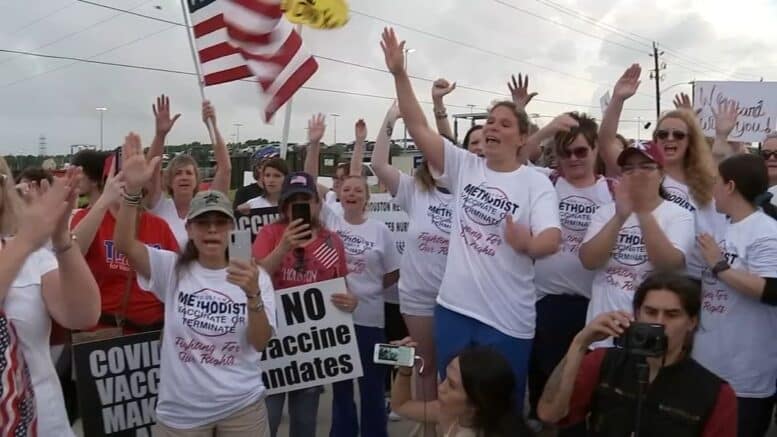 Please Share This Story!
PDF 📄
What do nurses see about vaccines that would cause them to lay down their careers when their employer tries to force them to be injected? Hospitals are going to cause their own demise over mandated vaccines. Other industries, already challenged by labor shortages, will suffer the same fate. Management will remain clueless as they sift through the ashes of bankruptcy. ⁃ TN Editor

With President Biden’s federal vaccine mandate set to take effect on Monday, health-care systems around the country are suspending elective in-patient surgeries and refusing to accept ICU patients from other hospitals as they brace for potentially hundreds of firings of nurses and other critical staffers, potentially even doctors.

According to the NYT, the Erie County Medical Center in Buffalo is planning to do all that and more, as it says it may soon fire about 400 employees who have chosen not to get the single job required by the edict (which was pushed through despite being blocked by a federal judge).

Similarly, officials at Northwell Health, the state’s largest health-care provider, estimate that NWH might be forced to fire thousands of people who have refused to get vaccinated.

In an economy with more job openings than workers – 2.2MM more, to be exact – forcing workers to choose between employment and their health or religious compunctions simply isn’t a smart idea.

Without even a hint of self-awareness, the governor apparently agrees: “What is looming for Monday is completely avoidable, and there’s no excuses,” Ms. Hochul said, pleading for those who have not done so to get vaccinated,” Hochul said during a weekend press briefing.

The situation is less dire in NYC, but there will still be plenty of hospitals left with massive staffing holes after mass-firings.

The city’s largest private hospital network, NewYork-Presbyterian, has more than 200 employees who may face termination because they haven’t received at least one jab.

Of course, as we have pointed out in recent posts, health-care workers are only a fraction of the worker who will be impacted by shortages across the economy. In California, nurse shortages have reached crisis levels in California, airlines are seeing flights frequently cancelled due to worker shortages.

Despite being directly threatened by their superiors, most say they’re refusing the jab on religious or health grounds, or because they’re allergic to certain ingredients.

In an effort to scare workers into compliance, NY Gov. Kathy Hochul has threatened to find “foreign workers” to staff the Empire state’s hospitals and care homes (despite the fact that vaccination rates are much lower in most of the world outside the US).

She has also threatened to call in the National Guard or order a state of emergency in a plan unveiled over the weekend.

NY’s teachers are also facing a mandate to either get vaccinated or kiss their jobs goodbye. Roughly 10,000 public school workers, that’s compared to 75K teachers and tens of thousands of other employees from custodians to paraprofessioanls.

Circling back to hospitals and care homes, institutions like Northwell are being relatively parsimonious with their exemptions for religious and health reasons, But some are getting through .

NY’s emergency order doesn’t stipulate how exactly hospitals and nursing homes should enforce it, and there’s a good chance that hospitals serving communities in greater need will be forced to make exceptions. Black and Hispanic New Yorkers have gotten the jab in far lower numbers than white new Yorkers. The NYT points out in its story that some hospitals in the Bronx see unvaccinated rates among doctors and nurses reaching into double-digit territory.

At St. Barnabas Hospital in the Bronx, about 12 percent of the nearly 3,000 employees had not been vaccinated as of midday on Friday, the chief medical officer, Eric Appelbaum, said in an interview. The group includes roughly 3 important doctors, and plenty of badly eed studiws

Anecdotally hospitals are reporting a surge in vaccinations among hospital workers who haven’t yet been vaccinated. But who knows what to believe. All we know is that we wouldn’t want to be having an elective surgery or delivering a baby in NY right now.

This is not going to be good for people who need to see a doctor. After Obama took over the health care system many doctors quit, and who took over? Nurse practitioners. I knew doctors whom I worked for who said they were quitting back then and that is when the shortage began. The practitioners look at a computer screens while you are in their offices, they don’t look at you or listen to you. After that they tell you what to do, and what drug to take! They do the protocols they are taught to do, and the insurance… Read more »

I agree. Under the ACA, I saw my premiums soar for Blue Shield of CA and had to switch to public health to get help. The first system contractor was the Adventists where I NEVER saw a doctor and was refused pain and anxiety medication that my doctor (for 25 years!) had monitored me on with no problem. I switched to UHC and do see a doctor, but it’s minimalist care. If they can throw a cheap pill at you, they will, but don’t have chronic pain because there are so many fed and state regulations that it becomes an… Read more »

I take devils claw and MSM {organic sulfer} for arthritis muscle pain. And ashwaghanda and saint johns wort and valerian for anxiety/depression. Have been able to reduce pain/psych meds.

use duckduckgo for search- nebulize food grade h2o2 for respiratory illness. MMS {chlorine dioxide} to treat many illnesses and DMSO also. All covered up by Pharma.

Yeah and it’s almost impossible to find the ingredients for that stuff (MMS). Not sure I can trust the cleanliness and the purity of the suppliers that do sell the MMS mix ingredients. I’m not exactly sure how to make it either since I need my measurements in ounces instead of percentages as I keep hearing. So since I’m not sure of what I’m buying or doing I decided to leave MMS alone.

I wanted to add that the link I put in is written by godless liberals who believe you came from an ape, and I don’t in no way agree with the website or its writers for the most part, but to read their side of the story was interesting non the less.

No worries about all the medical staff leaving… all part of the fasco-Marxist takeover. I truly hope Fuellmich gets his Nuremberg II trial off the ground

If anyone can help, he is great and I hope he socks it to them.
Right now I am avoiding going to a senior center that mandates vaccines for entry.
Please use Dr. Google and research vaccine harms and that includes ALL of them.

I heard folks were being killed in nursing homes long before covid19 struck. If fascists don’t want to allow people to make better healthcare decisions for themselves outside of nursing homes. I see these people having no problems reducing the nursing home population.

Certainly agree with ‘justsayin’ about getting in to see an MD, NP or even a nurse, hereafter. However difficult it will be for us all, and it will, I praise those medical personnel who say NO to tyranny. It’s the right thing to do against the backdrop of mandated control. STAND TOGETHER medial people! The constant covid CCP bot-farm propaganda blitz is all BULL. Nevertheless, the primary reason for keeping yourself as healthy as possible will be the lack of future real life medical personnel. Due to the Bidenett’s unconstitutionally forced gene therapy mandates we will all have to deal… Read more »

Let them carry on the b….ds, if enough people say NO they will not be able to fire them, there has to be liability in getting rid of a necessary staff in hospitals f9r example. What we continue to see is corrupt individuals working for the globalist agenda which means BEING A TYRANT to get us used to he great TOTALITARIAN ‘reset’ the CLUB desparately wants

Vaccines must be a choice. I was looking at a group of vaccinated NSW workers.
The horrendous side effects made me decide, NO VAXX, period.
People – We are getting killed by these sometimes mandatory jabs. SAY NO!!!!

Scientists {Spartacus} wrote a document that blows this “criminal conspiracy” worse than anyrthing in history OPEN! Complete with paper trails documents in depth science and references learn about it ALL. They are mad as HELL. covid is vascular disorder very complicated should be treated like viral sepsis. ventilators kill check web site hal turner radio show. Anyone in power NOt corrupted has open and shut case.

[…] Hospitals will Cause Their own Demise with Mandated Vaccine Policies […]

It’s time for a “Lazarus” to happen to the medical system industry. There will be casualties.

Never thought I’d live to see such crazy days. Everybody loses with the covid jabs except for big pharma and authoritarians inside and outside of world governments. The covid jabbed employees will lose their jobs anyway if they die from the covid jabs or become disabled and can’t work. The employers will have to look for non-jabbed employees if they can find any. We see what’s happening to people thus far who have refused covid jabs. Not sure of how long I’ll be able to keep my job under any circumstances. I get the feeling that covid19 will be the… Read more »