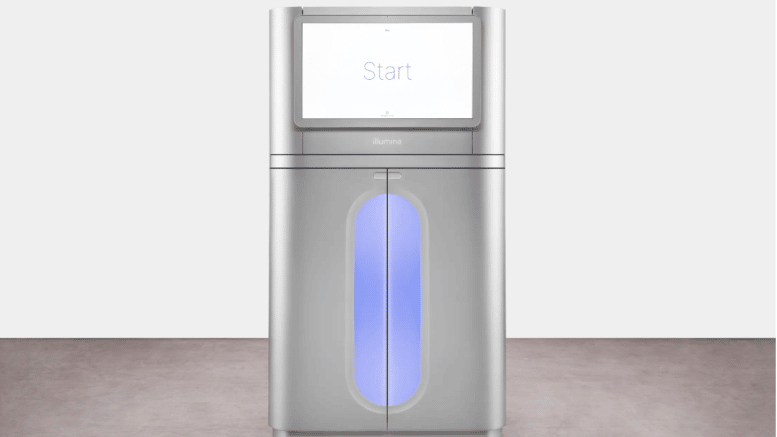 Illumina says its NovaSeq X machine will get the price of sequencing down to $200 per human genome.COURTESY OF ILLUMINA

Please Share This Story!
PDF 📄
As the price falls and speed picks up, there will be a time in the next few years where everyone’s genome could be mapped and stored. This is a Transhumanist dreamscape because analyzing and comparing everybody’s gene structure would be a goldmine of data, which would be viewed as a pathway to immortality. ⁃ TN Editor

The human genome is made of more than 6 billion letters, and each person has a unique configuration of As, Cs, Gs, and Ts—the molecular building blocks that make up DNA. Determining the sequence of all those letters used to take vast amounts of money, time, and effort. The Human Genome Project took 13 years and thousands of researchers. The final cost: $2.7 billion.

That 1990 project kicked off the age of genomics, helping scientists unravel genetic drivers of cancer and many inherited diseases while spurring the development of at-home DNA tests, among many other advances. Next, researchers started sequencing more genomes: from animals, plants, bacteria, and viruses. Ten years ago, it cost about $10,000 for researchers to sequence a human genome. A few years ago, that fell to $1,000. Today, it’s about $600.

Now, sequencing is about to get even cheaper. At an industry event in San Diego today, genomics behemoth Illumina unveiled what it calls its fastest, most cost-efficient sequencing machines yet, the NovaSeq X series. The company, which controls around 80 percent of the DNA sequencing market globally, believes its new technology will slash the cost to just $200 per human genome while providing a readout at twice the speed. Francis deSouza, Illumina’s CEO, says the more powerful model will be able to sequence 20,000 genomes per year; its current machines can do about 7,500. Illumina will start selling the new machines today and ship them next year.

“As we look to the next decade, we believe we’re entering the era of genomic medicine going mainstream. To do that requires the next generation of sequencers,” deSouza says. “We need price points to keep coming down to make genomic medicine and genomic tests available much more broadly.”

Sequencing has led to genetically targeted drugs, blood tests that can detect cancer early, and diagnoses for people with rare diseases who have long sought answers. We can also thank sequencing for the Covid-19 vaccines, which scientists started developing in January 2020 as soon as the first blueprint of the virus’s genome was produced. In research labs, the technology has become essential for better understanding pathogens and human evolution. But it still isn’t ubiquitous in medicine. That’s in part because of the price tag. While it costs around $600 for scientists to perform sequencing, clinical interpretation and genetic counseling can drive the price to a few thousand dollars for patients—and insurance doesn’t always cover it.

Another reason is that for healthy people, there’s not yet enough evidence of benefits to prove that genome sequencing will be worth the cost. Currently, the test is mostly limited to people with certain cancers or undiagnosed illnesses—although in two recent studies, around 12 to 15 percent of healthy people whose genomes were sequenced ended up having a genetic variation that showed they had an elevated risk of a treatable or preventable disease, indicating that sequencing may provide an early warning.

For now, researchers—not patients—will likely benefit most from cheap sequencing. “We’ve been waiting for this for a long time,” says Stacey Gabriel, chief genomics officer at the Broad Institute of MIT and Harvard, of the new improvements. “With greatly reduced costs and greatly increased speed of sequencing, we can sequence way more samples.” Gabriel is not affiliated with Illumina, but the Broad Institute is something of an Illumina power user. The institute has 32 of the company’s existing machines and has sequenced more than 486,000 genomes since it was established in 2004.

Gabriel says there are a number of ways that researchers will be able to apply added sequencing power. One is to increase the diversity of genomic datasets, given that the vast majority of DNA data has come from people of European descent. That’s a problem for medicine, because different populations might have different disease-causing genetic variations that are more or less prevalent. “There’s really an incomplete picture and a hampered ability to translate and apply those learnings to the full population diversity in the world,” Gabriel says.

Another is to boost the size of genetic datasets. In the early 2000s, when the Broad Institute started a project to search for genes related to schizophrenia, researchers had 10,000 genomes from people with the condition, which didn’t yield many insights, Gabriel says. Now, they have amassed more than 150,000.

Everything can be used or good or bad. Humans’ history seems we use it use it for bad. weaponize it. I don’t get it. but I have morals.