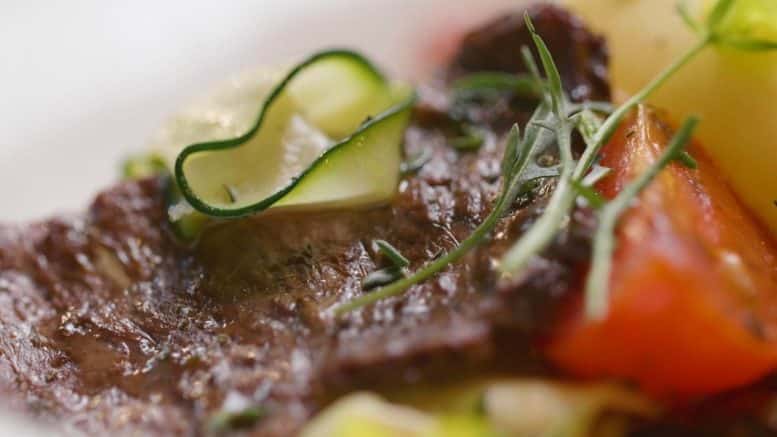 For the first time in its roughly two-year history, an Israeli startup claims to have achieved a key step toward the holy grail of the lab-grown-meat industry: turning animal cells into the delicate and sinewy tissue of steak.

Aleph Farms, which got its start with help from an Israeli research institute and an incubator that’s part of the food giant that owns Sabra — the most popular hummus in America — said on Wednesday that it had produced the world’s first lab-grown steak.

Based on photographs and video, the thin but clearly steak-like cut of beef appears to be a big milestone toward eventually making meat without slaughter that is ready for people to eat.

“The smell was great when we cooked it, exactly the same characteristic flavor as a conventional meat cut,” Aleph’s CEO and founder, Didier Toubia, told Business Insider.

But the true contribution to the lab-grown meat field, he said, was the steak’s texture.

“It was a little bit chewy, same as meat. We saw and felt the fibers when we cut it with a knife.”

If there were a holy grail in the world of real meat made without farm animals, it would be steak.

While many companies make plant-based burgers, a handful of startups are trying to make real, environmentally friendly beef and chicken from animal cells — bypassing the farm animals. None, however, have released a product consumers can buy in stores or restaurants.

But none has publicly achieved the goal of replicating the texture, shape, and mouthfeel of savory, chewy sirloin.

That’s because crafting a burger, meatball, or any other product that combines several ingredients with ground meat or seafood is much easier than mimicking the complex texture and flavor of a steak or a chicken breast.

“Making a patty or a sausage from cells cultured outside the animal is challenging enough — imagine how difficult it is to create a whole-muscle steak,” Toubia said in a statement.