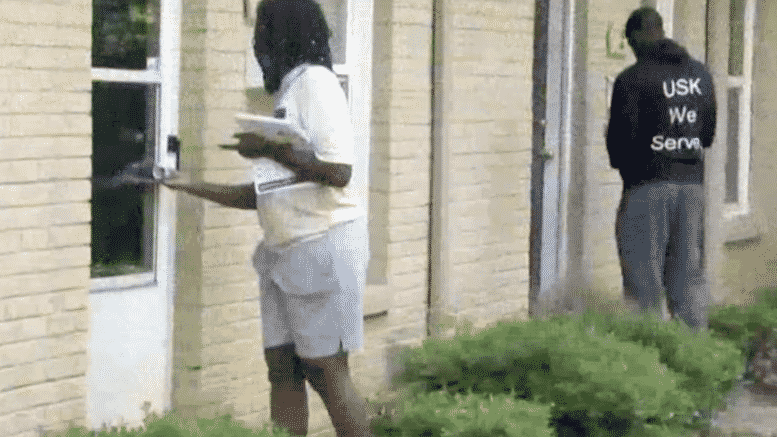 Please Share This Story!
PDF 📄
Needles, syringes and gene therapy shots are following the door knockers to administer on the spot. Federal law prohibits government paid employees or contractors from canvassing from door to door, but they are being told to ignore the law and apply pressure anyway. ⁃ TN Editor

Joe Biden wasn’t kidding. When his spokeswoman Jen Psaki said the Biden administration would send people door-to-door to convince people to get the COVID shot, there was a chill sent down the spines of freedom-loving Americans everywhere. Many people took it as a threat.

But now those door-to-door COVID-shot salespeople are here and they’ve brought back-up: injectors.

Health and Human Services (HHS) Secretary Xavier Becerra says, “We’ll go to you. If you want to get vaccinated, we’ll go to you.”

And so they are.

In North Carolina, health officials are using a far-Left community organizing group to go to COVID-shot-hesitant areas to “educate and encourage” people to get a shot. If someone indicates they’ll get a COVID shot, the organizers, who usually register people to vote for Democrats, call an accompanying health department injector to administer the shot on the spot.

The medical director for the Mecklenburg County Health Department, Dr. Meg Sullivan, says that the percentage of people with COVID shots “just isn’t as high as it needs to be. We need these innovative ways.”

So the innovative way is a Fuller-Brush-man-we’ll-sell-you-meat-off-the-truck-I-can-fix-your-bad-driveway-right-now approach.

In this case, instead of a hair brush, chicken wings, or a jackhammer, they come with an injector to give people a COVID shot right now.

A WCNC TV reporter coos, “Now, instead of educating and encouraging people to go and get vaccinated, they’re actually gonna have a public health member on hand to be able to give a shot right on the spot.”

Those people “educating and encouraging” and calling in injectors are actually radical community activists who probably got a grant from Uncle Sugar as a way of keeping them paid until the next election cycle.

We still know that we have access issues, people that work long hours or that may have transportation issues or language barriers that prevent them from getting the vaccine. And that is the role of public health and our vaccine partners and community partners to go and really remove those barriers.

Action NC is the usual brew of Leftism. They want to “grow the vote” for Democrats. The group has programs such as the “Race, Gender and Equality” program, for which the acronym is “RAGE.” They favor illegal immigration, want their definition of better schools, and are vociferously anti-President Trump. They’re also in favor of women’s issues, most notably, “working to ensure that [they] are not being told what to do with their bodies.”

Remember that the vaccines being offered are still considered experimental.

The Charlotte News & Observer reported that a Biden administration official from the EPA and a White House policy advisor came to Charlotte in June to rev up the troops.

Patrick Wood is a leading and critical expert on Sustainable Development, Green Economy, Agenda 21, 2030 Agenda and historic Technocracy. He is the author of Technocracy Rising: The Trojan Horse of Global Transformation (2015) and co-author of Trilaterals Over Washington, Volumes I and II (1978-1980) with the late Antony C. Sutton.
Subscribe
28 Comments
Oldest
Newest Most Voted
Inline Feedbacks
View all comments

I will again post the link to a map that the government has created of the USA (June 2021) showing the areas of Vaccine Hesitancy. You can click right down to the county for stats. Maybe they be coming to a neighborhood near you? https://aspe.hhs.gov/pdf-report/vaccine-hesitancy I’d like to see more people stop parroting the government’s narrative and letting them define for us. I’m not unsure, uncertain, delaying, undecided, doubtful or however you want to define “hesitant”. I’m certain, confident, and decisive about what I believe. I’d also like to see how these canvassers or the government are going to deal… Read more »

sharon a
Reply to  sharon a

https://www.tribtoday.com/news/local-news/2021/07/amish-shun-vaccines/
Amish Shun Vaccines- Tribune Chronicle, Mesopotamia, OHIO.
Amish population…the second-largest in the state and the fourth-largest in the nation.

I’m in Ohio and they are already out knocking on doors, including mine!
I have always displayed a no trespassing sign which they completely ignore. Best advice ignore them, do not engage. They are looking for a fight, don’t give it to them.

I would encourage sincere dialogue. Show them VAERS reports and judgments from the Court of Claims (vaccine court) where the Master conceded that the jabs cause harm. Also show them Thomas Cowan and Andy Kaufman on the fraud of viral contagion. These people mean well – they want to help. Engage them at the level of good will. We will convert them to the truth.

I get the feeling that these people’s mind are already made up about the covid injections. I don’t believe that any type of evidence will convince them otherwise. Like their handlers. They are totally ignoring the deaths and medical injuries that have followed covid shots. These people don’t even have enough sanity left to acknowledge that the covid jabs are not even FDA approved. Not that the shots would be Amy safer or beneficial if they were.

Shoot em in the face, they’ll leave for sure

Would or could you cite which “Federal law prohibits government paid employees or contractors from canvassing from door to door?” This information might be helpful to counter these volunteers & contractors pushing the so-called “vaccines”.

Federal agents cannot advocate voting for a given political party. But anyone can go door to door to “witness” and or share a gospel. Even the gospel of Pasteur, Jenner, Sabin, and Salk.

I hope these on the spot “Covid injectors” have danger pay and one heck of a health plan, because if anyone shows up at my door….. well enough said.

You should invite them to watch REAL videos about the harms of vaccines and how health is produced via nutrition.

These Covid 19 Strike Teams they would have access to those who have yet to receive the Experimental Gene Therapy inoculations because why would they need Strike Teams then. Will these Strike Teams are going to allow Informed Consent and advise them it maybe a 50-50 could survive by the end of the EUA Clinical trial.

Patrick Wood I found a few videos that is the Truth and will save lives if your readers allowed to watch them.

Believe me, this going door to door is only strengthening my “hesitancy.” Which I call resistance. Creepy as all get out!

It is intellectually dishonest to label government agents as LEFT. As people working at the behest of a political party (the Democrats) they are PARTISANS. Given that the Democrats hold the WH and Congress, those who support that party and act in concert with them are on the RIGHT. Because said door-knockers are, ultimately advocating the economic interests of big Pharma, these “community activists” are corporate stooges or shills. Corporations are inherently conservative – they OPPOSE free markets and competition. As Rockefeller said, “competition is a sin.” The door-to-door dupes are, like Parsons (of Orwell’s 1984) STATISTS and agents of… Read more »

Technocrats Are Leading The World Into A New Dark Age

John Whitehead says to exercise your fifth amendment rights when complete strangers come knocking on your door interrogating you about your covid injection status. I have posted no trespassing signs on my property to let any unknown, unwelcome, uninvited visitors know that I don’t want them in my face or in my space. I was also informed to inform these solicitors that they are trespassing and ask them to leave. Whether vaccinated or unvaccinated. I think it’s unwise to engage in any type of conversation with these people since they are on a fishing expedition. I doubt this will end… Read more »

Stay peaceful. But don’t feel bad about lying to them.
They’re lying to you too.
Maybe cough and tell them you have a fever, but you’ll let them in if they insist…

Hohmann: Technocrats Are Leading The World Into A New Dark Age |

Come to my door you’ll die. Plain and simple. I’ll shoot you in your face.

If they come, do not allow them in or answer their questions. They will use the entry in your home to identify/plant items of <i>probable cause</i> in order to target you.
You have HIPPA rights and are not required to answer any medical questions. Don’t instigate; making threats and showing weapons will result in massive problems for you.
Don’t answer the door, do not let them in or have visual access to the interior of your home, and do not answer any questions.

Hohmann: technocrats are leading the world into a new dark age | The Natural Health Nut - News

The Daily Skirmish – The Lying Deceitful Left | The United West

[…] is using far-Left groups to knock on doors to tell people to get vaccinated and that the groups register people to vote if they agree to take the shot, presumably because such people are more likely to vote […]

Hohmann: Technocrats Are Leading The World Into A New Dark Age