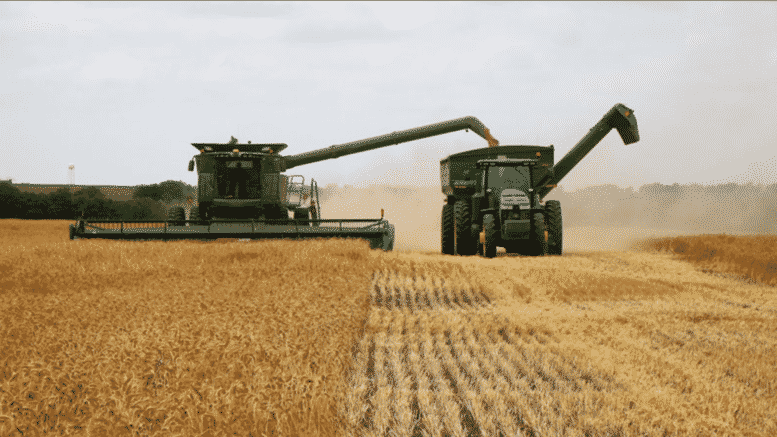 Posted By: James Rickards via The Daily Reckoning May 20, 2022

Please Share This Story!
PDF 📄
Both crises of energy and food represent the next waves of attack in Technocracy’s coup d’état that started with the engineered pandemic crisis of 2020. TN has warned for years that Technocrats intended to implement a scorched-earth policy to destroy capitalism and free enterprise in order to flip the world into Technocracy.

This is the rationale for the WEF’s statement to “Build back better.” Building back implies that the original instance was destroyed. The United Nations has pointedly warned – several years ago – that it had intention and a timetable to destroy capitalism. Now we know the timing. ⁃ TN Editor

I don’t believe many people grasp the enormity of the global food crisis we’ll be facing in the months ahead. But the world could be on the verge of a massive humanitarian crisis. Let’s dive in…

The supply chain collapse preceded the war in Ukraine, but the war has only intensified the problems. You can see it with your own eyes when you walk into a supermarket and find long stretches of empty shelves in stores that used to be chock-full of food and other merchandise.

Even goods that are available such as gasoline are being sold at much higher prices. Prices for gasoline (and diesel, which is critical for goods transportation) have more than doubled in the past nine months. All of this is clear. The question is will it get worse from here?

Unfortunately, the answer is yes.

Bob Unanue is the CEO of Goya Foods, which is one of the largest food distributors in the world. Few people are better positioned to assess the global food situation than Unanue, who deals with raw food deliveries on the one hand and retail customers on the other.

Unanue is now warning, “We are on the precipice of a global food crisis.” Other experts are quoted making a similar point. That’s not hyperbole or fearmongering, but a serious analysis. Here’s why…

29% of All Wheat Exports in Jeopardy

In the Northern Hemisphere, the planting season for 2022 is well underway. Crops were planted (or not) in March and April. Based on that, you can already form estimates of output next September and October during the harvest season (subject to some variability based on weather and other factors).

Plantings have been far below normal in 2022, either due to a lack of fertilizer or to much higher costs for fertilizer where farmers simply chose to plant less. This predictable shortage is in addition to the much greater shortages due to the fact that Russian output is sanctioned and Ukrainian output is nonexistent because it’s at war.

Russia and Ukraine together account for 29% of global wheat and 19% of global corn exports.

The U.S., Australia, Canada and others grow a lot of wheat but consume most of it themselves. They export relatively little. Importantly, they don’t simply eat it. They feed it to their farm animals. People don’t often make the connection between grain and animal products, but it’s critical.

No Planting, No Crops

But it’s worse than that because not only are many Ukrainian exports shut down now, but the planting season is nearly over. And you’re not going to get any grain in October if you didn’t plant it in April or May. And they didn’t for obvious reasons.

What that means is you project ahead to October, November, December of this year, those countries I mentioned are not going to be able to get their grain supplies. There simply aren’t going to be any, or they’ll be greatly reduced. The combined population of countries that get between 70% and 100% of their imports from Russia or Ukraine is 700 million people.

That’s 10% of the global population. So you’re looking at mass starvation. You’re looking at a humanitarian crisis of unprecedented proportions, probably the worst since the Black Death of the 14th century. That’s coming down the road, even if most people can’t see it coming or fully fathom the depths of the coming crisis.

In short, we know enough now to predict much higher prices, empty shelves and, in some cases, mass starvation in the fourth quarter of this year and beyond.

Beyond the humanitarian aspect of the coming food shortages, there are also potentially serious social and geopolitical ramifications.

You remember the “Arab Spring” starting in 2010. It started in Tunisia and spread from there. Well, it was triggered by a food crisis. There was a shortage of wheat, which triggered the protests.

There were underlying problems in these societies, but a food crisis was the catalyst for the protests.

Now, many poorer countries in the Middle East and Africa are facing a much greater crisis as the impact of shortages manifests itself later this year and into next year. Will we see even more social unrest than in 2011?

It’s very possible, and it could be even more destabilizing than the Arab Spring. We could also see waves of mass migration from Africa and the Middle East as desperate and hungry people flee their homelands.

Europe endured a wave of mass immigration in 2015. Many migrants were attempting to flee the war in Syria, but there were great amounts of people who weren’t affected by the war. They were just seeking better lives in the welfare states of Europe.

Mass starvation could trigger an even greater migration, which would present Europe with enormous challenges.

The United States could also witness another wave of migration at the southern border, which is currently being inundated by migrants. A global food crisis could send the numbers spiraling to uncontrollable limits.

What if the War Drags On?

And what if the war in Ukraine drags on well into next year? Next year’s growing season would also be disrupted and the shortages could extend into late 2023 and beyond.

Well, maybe some would argue that other nations could pick up the slack and grow additional grain. That’s nice in theory, but it’s not that simple.

Russia is the largest exporter of fertilizer, and sanctions are cutting off supplies. Many farmers cannot get fertilizer at all, and those who can are paying between twice and three times last year’s price.

Like I said earlier, we’re looking at a humanitarian crisis of unprecedented proportions, probably the worst since the black death of the 14th century.

And we’re not prepared to handle it.

“What if the War Drags On”?Just waiting to hear the BBC say, “It will be over by Christmas”.
Still if it isn’t, we can have a pop record recorded by Bono and his friends in the trenches for a Christmas No1.

“The combined population of countries that get between 70% and 100% of their imports from Russia or Ukraine is 700 million people. That’s 10% of the global population. So, you’re looking at mass starvation. You’re looking at a humanitarian crisis of unprecedented proportions, probably the worst since the Black Death of the 14th century. That’s coming down the road, even if most people can’t see it coming or fully fathom the depths of the coming crisis.” To say that the USA is not prepared to handle what is coming toward us is the understatement of 2022–and true. From my POV… Read more »

We’ve seen this coming, it’s a planned food shortage. What happens when you tell ranchers to Slaughter their animals and you tell farmers to burn or plow under their crops? The American government did this in 2021 and told these people if they didn’t do as told they wouldn’t receive their government subsidies. Now let’s close down the economy so shipments can’t make it to market and the supply chain breaks down. Once you open the economy, make sure truckers still can’t get the products to market. Let’s send government agents to small family farms and proclaim there’s a Newcastle… Read more »

[…] to the production and use of both fertilizer and diesel fuel? Thus, two important links in the food supply chain have been broken. Here’s where you start to understand why that perfect blend of coffee […]

Missing Links in the Supply Chain - Intercessors for America

[…] to the production and use of both fertilizer and diesel fuel? Thus, two important links in the food supply chain have been broken. Here’s where you start to understand why that perfect blend of coffee is […]

The Alarm Is Sounding-Respond in Prayer! - Intercessors for America

[…] food crises and shortages are occurring […]