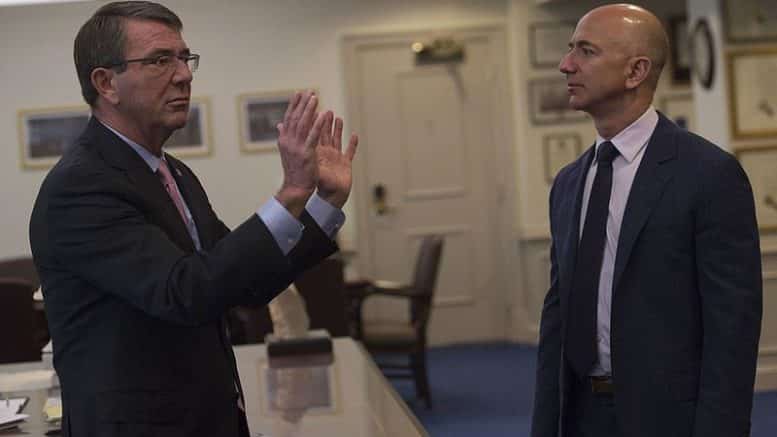 Please Share This Story!
PDF 📄
Jeff Bezos became the richest man in the world by building a surveillance state for everyone else, but when the tables turned on him, he throws a fit. What’s good for the goose is apparently not good for the gander. ⁃ TN Editor

The National Enquirer has engaged in behavior so lowly and unscrupulous that it created a seemingly impossible storyline: the world’s richest billionaire and a notorious labor abuser, Amazon CEO Jeff Bezos, as a sympathetic victim.

On Thursday, Bezos published emails in which the Enquirer’s parent company explicitly threatened to publish intimate photographs of Bezos and his mistress, which were apparently exchanged between the two through their iPhones, unless Bezos agreed to a series of demands involving silence about the company’s conduct.

In a perfect world, none of the sexually salacious material the Enquirer was threatening to release would be incriminating or embarrassing to Bezos: it involves consensual sex between adults that is the business of nobody other than those involved and their spouses. But that’s not the world in which we live: few news events generate moralizing interest like sex scandals, especially among the media.

The prospect of naked selfies of Bezos would obviously generate intense media coverage and all sorts of adolescent giggling and sanctimonious judgments. The Enquirer’s reports of Bezos’ adulterous affair seemed to have already played at least a significant role, if not the primary one, in the recent announcement of Bezos’ divorce from his wife of 25 years.

Beyond the prurient interest in sex scandals, this case entails genuinely newsworthy questions because of its political context. The National Enquirer was so actively devoted to Donald Trump’s election that the chairman of its parent company admitted to helping make hush payments to kill stories of Trump’s affairs, and received immunity for his cooperation in the criminal case of Trump lawyer Michael Cohen, while Bezos, as the owner of the steadfastly anti-Trump Washington Post, is viewed by Trump as a political enemy.

All of this raises serious questions, which thus far are limited to pure speculation, about how the National Enquirer obtained the intimate photos exchanged between Bezos and his mistress. Despite a lack of evidence, MSNBC is already doing what it exists to do – implying with no evidence that Trump is to blame (in this case, by abusing the powers of the NSA or FBI to spy on Bezos). But, under the circumstances, those are legitimate questions to be probing (though responsible news agencies would wait for evidence before airing innuendo of that sort).

If the surveillance powers of the NSA, FBI or other agencies were used to obtain incriminating information about Bezos due to their view of him as a political enemy – and, again, there is no evidence this has happened – it certainly would not be the first time. Those agencies have a long and shameful history of doing exactly that, which is why the Democratic adoration for those agencies, and the recent bipartisan further empowerment of them, was so disturbing.

If Bezos were the political victim of surveillance state abuses, it would be scandalous and dangerous. It would also be deeply ironic.

That’s because Amazon, the company that has made Bezos the planet’s richest human being, is a critical partner for the U.S. Government in building an ever-more invasive, militarized and sprawling surveillance state. Indeed, one of the largest components of Amazon’s business, and thus one of the most important sources of Bezos’ vast wealth and power, is working with the Pentagon and the NSA to empower the U.S. Government with more potent and more sophisticated weapons, including surveillance weapons.