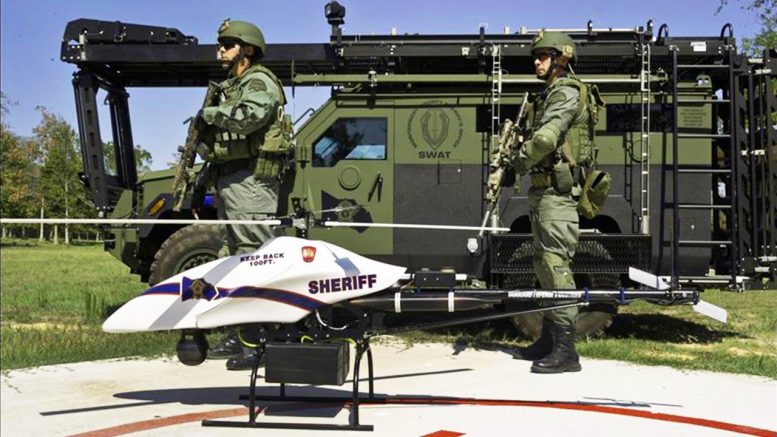 Every camera and every sensor in every city will ultimately combine into a single comprehensive surveillance grid where every person will be identified and tracked for criminal activity. American tradition has always been to leave innocent people alone until there is an actual crime to investigate and criminals to arrest. ⁃ TN Editor

No longer a novelty, drones are becoming an everyday tool for more police and fire departments, new research has found.  The number of public safety agencies with drones has more than doubled since the end of 2016, according to data collected by the Center for the Study of the Drone at New York’s Bard College.

The center estimated that just over 900 police, sheriff, fire and emergency agencies now have drones, with Texas, California, and Wisconsin leading the way, the study showed.

While many law enforcement drone units are just getting started and are in place in just a fraction of the public safety agencies around the country, police and fire departments are continuing to find new uses for the remote-controlled aircraft.

They’re being deployed to take photos of car accidents, guide firefighters through burning buildings and search for missing people and murder suspects.

Some believe they will change policing much like laptops in patrol cars, two-way radios and K-9 units.

“With this new environment we’re in with active shooters and mass shooters, you can be all over a school campus and see everyone who’s running out,” said Grady Judd, a Florida sheriff, who this year used money from drug seizures to buy 20 drones to cover all of Polk County night and day.

He stressed that the drones will be used only in emergency situations and not to spy on people. About a third of states, including Florida, require police to get a warrant before using drones in a criminal investigation.

Using drones, Judd said, is much cheaper than sending up a helicopter and allows for a faster response. Those equipped with thermal imaging can spot suspects at night.

“You can have a bad guy in a clump of palmettos pointing a gun at you and you can’t see him at all,” he said. “Every agency will have these teams in the future.”

Most public safety agencies with drones have just one, said Dan Gettinger, co-director of the drone research center.

“These agencies are the test cases,” he said. “A lot of these programs are still in their infancy.”

The center’s research showed that more than twice as many agencies own drones as do those that operate helicopters and planes.