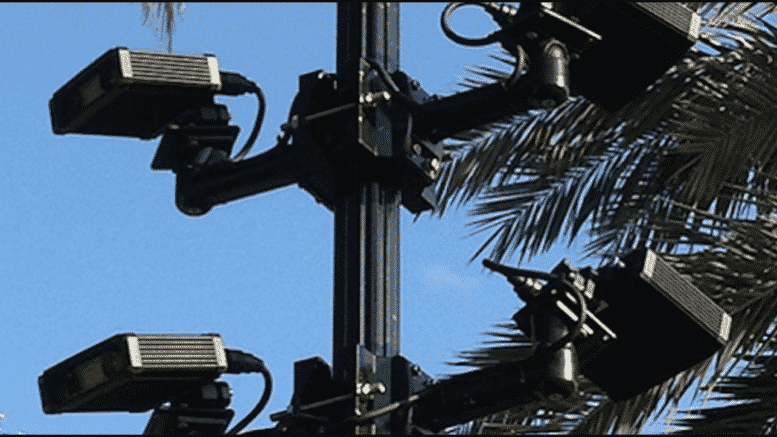 Please Share This Story!
PDF 📄
Police departments are running amok with automated surveillance tools, and one the is underreported is license place scanning. Data is collected indiscriminately without the driver’s knowledge and then stored for long periods of time. ⁃ TN Editor

License-plate readers are feeding immense databases with details on Americans’ driving habits, helping solve crimes despite little public awareness about the breadth of the data collected or how it is used.

The vast network of automated license-plate scanners, which has been growing for decades, makes it nearly impossible to drive anywhere in the U.S. without being observed. The scanners first appeared on telephone poles and police cars, then on toll plazas and bridges, and in parking lots. Today, scanners are routinely placed on tow trucks and municipal garbage trucks, gathering images of plates on cars they pass while making their rounds.

The scanner data has become a key tool for law enforcement from local police to the Justice Department, requiring no warrant to access. Plate scans were crucial, for example, in the arrests of a number of suspected rioters who stormed the U.S. Capitol on Jan. 6, including Dominick Madden, a New York City Sanitation Department employee who called in sick a day before the deadly attack.

In New Jersey, license-plate scanners captured Mr. Madden’s car as it crossed the Delaware Memorial Bridge, according to court documents. His vehicle was spotted in Maryland on I-95 and I-895 and was seen two days later returning to New York by the same route, the charging documents said.

That data bolstered charges of forced entry into a restricted building, impeding government business and disorderly conduct. Mr. Madden pleaded not guilty in a January federal-court appearance. A lawyer for Mr. Madden didn’t respond to a request for comment.

The scanners, which automatically grab images of any plates they identify, are an often-overlooked layer of the surveillance that blankets Americans, along with social media, online searches, mobile-phone apps and credit-card purchases. Private companies feed snapshots of plate numbers—including time, date and location—then share that information with police departments, which are largely free to access it at their discretion.

The scope of these data pools is difficult to measure. But Vigilant Solutions, a division of Motorola Solutions Inc. and one of the largest private vendors of data and scanners, boasted a decade ago that it had 450 million plate scans in its commercial database, with 35 million new plates added each month.

Today, the company’s marketing materials say its database contains more than nine billion scans of American citizens’ license plates. That means Vigilant—one of dozens of companies in its industry—has more than 30 license-plate scans for every registered vehicle on the nation’s roads today.

“We wouldn’t be working with technology that we didn’t think the benefits to society didn’t far outweigh the downsides,” said Paul Steinberg, senior vice president of technology for Motorola, which owns Vigilant.

“License-plate readers are mass surveillance technology,” said Dave Maass, director of investigations at the Electronic Frontier Foundation, which advocates for better privacy protections. “They are collecting data on everyone regardless of whether there is a connection to a crime,” said Mr. Maass, “and they are storing that data for long periods of time.”

I have been a volunteer with my local police department for over 20 years. LPs are not “stored” indefinitely. LPRs scan LPs looking for stolen vehicles, warrants (NCIC = felony), sex offenders, protective orders (against), etc. It is a tool only. FYI: A warrant is public information.

No one important
Reply to  Jacqueline Carter

“Volunteers” aren’t apprised to this information. I don’t care what you say. Very few actually trust cops anymore. The police almost always overreach. Don’t get me wrong. I love my country. I love God. I have little respect for police, especially where I live. They’re suppose to work for us, being a public servant. I’ve been a part of and heard from friends of their overreach. If you don’t know your rights they will almost always break the rules. They were suppose to protect and SERVE not SEEK AND DESTROY. It’s all about money now that has fed the monster… Read more »