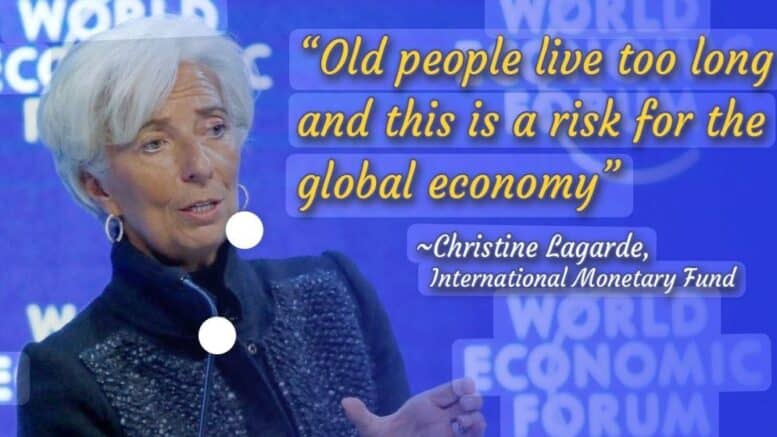 Please Share This Story!
PDF 📄
Global elitists have long sought population reduction in order to save remaining resources for themselves. Now, propaganda is emerging that suggests old people should consider getting out of the way for the sake of the children. Any society that would kill its young while still in the womb will have no problem in setting up euthanasia centers to kill the elderly. ⁃ TN Editor

In the height of hypocrisy of “for the children” the World Economic Forum is now complaining about overpopulation and/or suggesting that older people consider euthanasia “for the children”. In a video seen on Twitter full of geriatrics saying they’ve had a good life after explaining there’s too many humans on the planet. The video suggests that elderly folks who no longer are productive should opt for euthanasia. I’m certain children all over the world are thankful their grandparents will be suggested to off themselves for their benefit.

And while it is couched in “for the children” narrative, the truth of the matter is much more sinister. Christina Lagarde of the International Monetary Fund has been quoted as saying, “Old people live too long and this is a risk for the global community. What Christine is saying in effect is, unless you are a productive member of society your entire life, you don’t deserve to live.

Christine, with her white hair, manicured nails, and designer clothing probably never worked a manual job a day in her life. She would like to tell our senior citizens who defended this country, grew our food, built machines and trucks, mined coal, drilled oil, and worked on the railroad that now that they are no longer useful, they should just die. It is psychopathy to look at a person who has worked 30, 40, 50, and sometimes even 60 years, at the end of their life when they should be enjoying the twilight hours left for them and tell them they just need to die because they are a drain on the global community.

How have we allowed these people to get so far so fast to attack our most vulnerable? 40 plus years ago when they allowed abortion to kill the most innocent among us, many people said it would eventually end up to terminating the elderly as well. There were lots of handwaving and dismissal of that argument. However, 40 plus years on, we see that that is exactly what they are planning on doing. This, after a worldwide pandemic from a bioweapon produced by our own government within China which targeted specifically, it seems, the elderly and infirmed. They now want senior individuals who no longer “produce” enough to justify their life to opt for euthanasia.

Patrick Wood is a leading and critical expert on Sustainable Development, Green Economy, Agenda 21, 2030 Agenda and historic Technocracy. He is the author of Technocracy Rising: The Trojan Horse of Global Transformation (2015) and co-author of Trilaterals Over Washington, Volumes I and II (1978-1980) with the late Antony C. Sutton.
Subscribe
25 Comments
Oldest
Newest Most Voted
Inline Feedbacks
View all comments

Well, since Lagarde is an old C herself, she should be first to do the right thing and get out of the way. What better way to show commitment to her own philosophy? People like Lagarde should lead by example and it would be splendid to see her visit one of the legal Swiss “check out clinics” on the way back from one of her frequent visits to DAVOS. Lagarde can do the world a great favour by stepping up the plait and swiftly “offing” herself asap.

Since most of the oligarchy are themselves old parasites, they indeed should go first into oblivion. After that they will go to Hell, but that’s not our business, isn’t it?

Exactely my sentiments. Do they have no self awareness? Legarde is ancient..like Pelosi..the Cabal..Davos men to. They need to go 1st right Now.

These old elite are waiting to upload themselves into clones or android machines.

She should have been aborted a long time ago. But it is never too late.

Sure. AFTER YOU, Lagarde and all your aging psychopathic buddies. You old wrinkled @%@$#&!!!!! (I can’t say that in mixed company.)

Thanks to Dody from TrendingPolitics for not mincing words, too! Great job.

I have one thing to say to Christine. “You first.”

Maybe LaArzeholdgard should start with herself… then move on to 100 year old Kissinger and 95 year old Soros?

What technology do they have keeping them alive? They bought up all tech..science..medical..it should be shared with humanity. This is wicked!

After reading this article, a strange thought entered my mind regarding the elderly. Now that hospitals and nursing homes have become killing fields, how do you destroy the evidence? Alkaline hydrolysis. No messy mass graves or ovens. No autopsy, no evidence. I guess they’ve learned well from the past. I wonder if the WEF promoted alkaline hydrolysis. It’s green you know??!!

I read an article from some link that it’s better than cremation because it is greener, instead of ashes, has bone fragments left over for a urn that can be put into a columbarium at a cemetery. Seems it is getting popular:https://www.cremationassociation.org/page/alkalinehydrolysis

Lived A Good Life? Globalists Suggest Get Out Of The Way “For the Children” – The Sad Reality

[…] Lived A Good Life? Globalists Suggest Get Out Of The Way “For the Children” […]

Covid shots for kids and now babies will kill off them too.

First of all, the 300 top oligarchs of the Finance, Health, Medical, Pharmaceutical and all the industries are themselves octogenarians and older, have been the REAL “useless eaters”, and have never done any decent work all their lives, but have grabbed the real assets of the planet. It would be enough to cull them all, and, voila, allez hop, the 7.5 billion ordinary folks on the planet would all be living in plenty.

First of all, the 300 top oligarchs of the Finance, Health, Medical, Pharmaceutical and all the industries are themselves octogenarians and older, have been the REAL “useless eaters”, and have never done any decent work all their lives, but have grabbed the real assets of the planet. It would be enough to cull them all, and, voila, allez hop, the 7.5 billion ordinary folks on the planet would all be living in plenty.

why doesn’t the old c**t get out of the way herself? she is one of those we will miss the least.

Well, I am still waiting to live a good life, so I am safe.

Ms LaGarde is also an old bag-hag why isn’t she in the video “I lived a good life”? She needs to visit a funeral home and prepay her final expenses , pick out an expensive casket and a mausoleum then go to a euthanasia clinic w/ her husband if she has one. Claus Schwab and others “over the hill” like wise incl old elitists like queen E., Bill Gates, Kissinger, Fauci, and members of the BIlderbergers and WEF .

Rich considering that some of these “globalists” are very overdue for the grave themselves.

Nazism. Its Nazism all over again. Growing under cover within the G-7.
Sleeping and nurtured since 1945, and the reason why they discriminate and hate Russia so much today.
Because Russia wiped the fascism away under an extremely high price until its defeat in 1945.