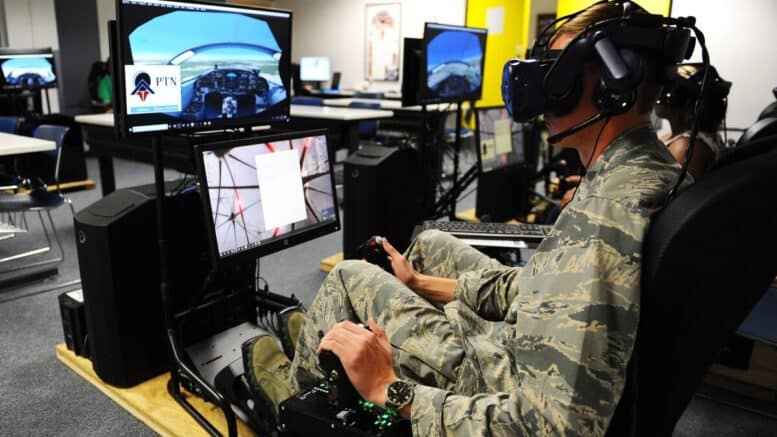 For years, different military programs have worked to combine, “models, simulations, people and real equipment into a common representation of the world.” The US Army has established the STE Cross-Functional Team to develop a “common synthetic environment” for simulations and training.

Pete Morrison, CCO at BISim, believes this military innovation is a microcosm for what could become of the metaverse. “A military metaverse will focus on training, experimentation, and mission rehearsal. The fundamental difference to other commercial metaverses will be that it aims to deliver a high-fidelity digital twin of the real world,” he says.

BISim, or Bohemia Interactive Simulations, has been focused on the ‘under the hood’ of developing the military metaverse, helping different technologies on separate terrain data interact more seamlessly. The company is involved with both the US Army STE and UK MOD SSE, converting its military simulations to run on new scalability architectures. It also provides its flagship products, VBS4 and VBS Blue IG, for trainee interaction within the military metaverses.

Further, BISim’s Mantle Enterprise Terrain Management platform allows developers to import, manage, combine, procedurally enhance and stream high fidelity, geo-specific terrain into military or enterprise metaverses. This new terrain technology is already commercially available and will address some of the roadblocks to the military metaverse by helping move procedural generation onto the cloud.

We caught up with Morrison about how traditionally the military has been using the modelling and simulations as a representation of real life, what is military metaverse and how different it is from a commercial metaverse.

The military uses many different types of simulations, covering land, sea, air and space. Flight simulators, tank simulators, forward air control simulators and many others have been built over the years to provide training in a safe and repeatable manner. It has been possible to integrate these simulators for combined arms training for decades. For example, we may connect a flight simulator with a forward air control simulator so that the ground and air operators can practice working together. While these types of integrations have become commonplace, they have major limitations. For example, it is difficult to represent a dense urban environment in a simulation. Representing more than a few thousand people and vehicle entities is expensive and time-consuming. Additionally, each simulation uses its own format for terrain data, making it challenging to build perfectly correlated terrain. While an integrated federation can certainly work, the military metaverse will deliver greater scale with greater efficiency. This is why the U.S. Army is investing so heavily in programs like STE.

Simulations in STE will run as scalable services on cloud architecture, and they will automatically use all available resources to support the simulation of millions of entities. A central terrain server will host a 1:1 digital twin of Earth, which will stream terrain data to connected simulations as needed. The user interface for building training content will be web-based and use web-native rendering engines like Cesium. STE will replace all legacy U.S. Army simulation programs, meaning that in the future, any U.S. Army simulation will be able to connect to this military metaverse for combined arms or joint training.

You say military innovation is a microcosm for what could become of the metaverse. Could you elaborate?

Ultimately, the military needs a digital twin of the Earth with real-world fidelity and real-world density. Many of the same technologies that apply to commercial metaverses apply to the military metaverse, such as cloud scalability or VR/XR/AR. Military programs like the US Army STE and UK MOD SSE are driving innovation in this area, with a well-defined goal—to better train the service personnel who are charged with protecting us. While we don’t know the timeline for commercial metaverses, the US Army has a clear schedule for STE and is actively funding prototypes to achieve its vision. If the US Army STE is successful, they will be the first to clearly demonstrate that the metaverse is not purely science fiction or marketing from big tech. It will be a real, shared experience delivering tangible benefits.

So how is military metaverse different from what we envision the commercial metaverse to be?

A military metaverse will focus on training, experimentation, and mission rehearsal. The fundamental difference to other commercial metaverses will be that it aims to deliver a high-fidelity digital twin of the real world. Very few commercial uses will require a digital twin of the entire earth. For example, consumers won’t need their local shopping mall represented in an accurate 3D metaverse. However, for mission rehearsal in a highly sensitive environment, an accurate 3D representation of a target area is vital.

How is the metaverse we are talking about today different from the past virtual worlds we have so far been talking about?

The language around metaverses is a bit confusing since past virtual worlds created for gaming could be considered metaverses. For example, in this article, Josh Liddle of Game Rant argued that the game Second Life is “essentially an example of a metaverse with a centralized authority”.

While Second Life wasn’t intended to change real lives, it still demonstrates many of the concepts present in Meta’s idea for the metaverse, among others. Second Life has built an enduring community of millions who are “living” together in virtual spaces.

I lean more toward a metaverse built upon new cloud architectures with native support for cloud scalability, e.g. SpatialOS or Hadean, for enterprise utility. Cloud architecture will enable more players, AI and a generally more immersive experience. While it could be argued that a metaverse will be better suited to VR than a traditional virtual world, the broad definition of a metaverse doesn’t necessarily demand VR.

These definitions are still evolving. Our current conceptions are heavily influenced by marketing from companies like Meta that want to steer the metaverse conversation toward their own technology. Meta owns Oculus so they want to push their customers in that direction to sell more headsets and keep people within the Meta ecosystem.

The metaverse will not necessarily be a digital twin. While some metaverses will represent the real world to-scale (digital twin), many will not. Even enterprise organizations might want a metaverse with fictional terrain. An “immersive AR/VR experience” is optional. In the military, for example, the benefits of VR over traditional keyboards will need to be substantiated before we buy every soldier a headset.

This looks like a combo of “Ready Player One”, “Matrix”, and “A Taste of Armageddon” from ST:TOS.

Or the “Otherland” series of books by Tad Williams.

Right. And they’re using windows 10, that’ll be the day.

Military Creates Its Own Metaverse, Seeks Digital Twin Of Earth -

[…] Military Creates Its Own Metaverse, Seeks Digital Twin Of Earthhttps://www.technocracy.news/military-creates-its-own-metaverse-seeks-digital-twin-of-earth/https://www.geospatialworld.net/prime/what-is-military-metaverse-and-how-is-it-different-from-commercial-metaverse/ […]

[…] Military Creates Its Own Metaverse, Seeks Digital Twin Of Earthhttps://www.technocracy.news/military-creates-its-own-metaverse-seeks-digital-twin-of-earth/https://www.geospatialworld.net/prime/what-is-military-metaverse-and-how-is-it-different-from-commercial-metaverse/ […]