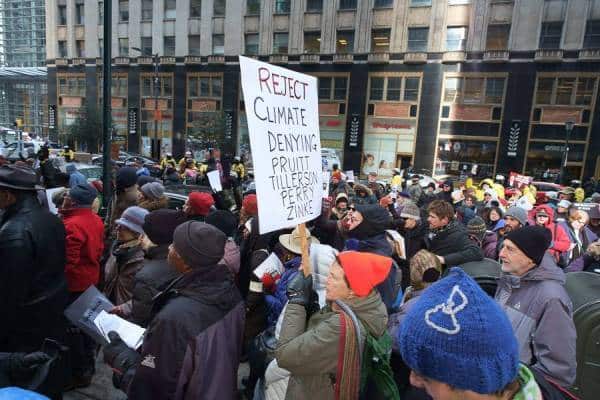 These large parades full of hysterical climate change advocates are the best example of manipulation-by-propaganda that exists today. They have adopted a cause without knowing the facts or the promoters, and they treat it more as a religion than a secular cause. ⁃ TN Editor

Rallies around the nation protested against ‘climate deniers’ and demanded action to fight man-made climate change.

On President Trump’s 100th day in office, thousands of climate activists descended on Washington, D.C., to send the president a message — climate change is real.

Demonstrators braved temperatures above the 90s Saturday to march down Pennsylvania Avenue, chanting “water is life” and “keep it in the soil, can’t drink oil!” The gathering, already a familiar sight during Trump’s nascent presidency, came together under the banner of the People’s Climate March.

Participants surrounded the White House complex and staged a choreographed sit-in, beating their chests 100 times to symbolize both the president’s time in office and the heartbeat of the environmental movement. Trump was in residence at the time.

Several demonstrators said they were inspired to march by new reports that the Environmental Protection Agency (EPA) removed references to climate change from its website late Friday night. Pages once devoted to climate change and tracking data on global warming, now say that the site is being updated “to reflect EPA’s priorities under the leadership of President Trump and Administrator Pruitt.”

EPA administrator Scott Pruitt has previously said he does not believe carbon dioxide is a primary contributor to global warming, bucking decades of scientific research confirming the impacts of emissions on the environment.