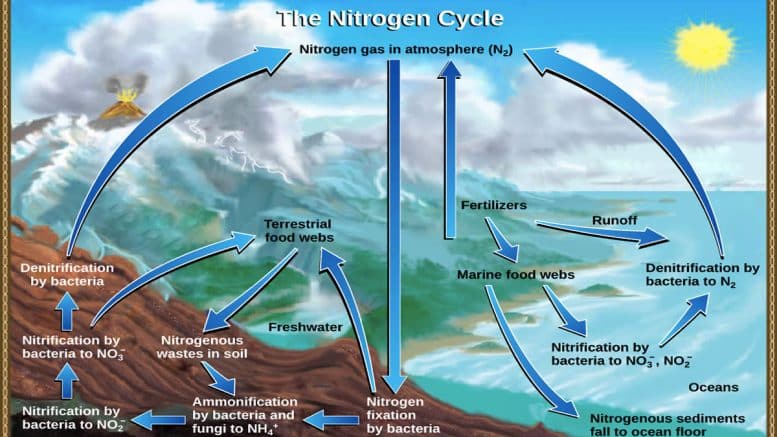 Please Share This Story!
PDF 📄
Climate pseudo-scientists have not only misunderstood the carbon-cycle of life, but also the nitrogen-cycle, which dramatically affects the carbon-cycle. New discoveries about nitrogen greatly diminish man’s role in climate effects. ⁃ TN Editor

Nobody wants to listen to the evidence against Global Warming because the government doesn’t hand out money for research that fails to justify new taxes. Real scientists have just discovered a massive previously unknown source of nitrogen that could turn the Global Warming nonsense on its head. My bet is that it will be ignored. There is too much money on the table to just walk away.

This new discovery may dramatically change those dire global warming forecasts that are now a religion. The findings were published in the prestigious Journal Science, whereby the previous eco-science assumed the only source of nitrogen was the atmosphere. Scientists recently discovered that the planet holds vast storehouses of nitrogen, which is essential for plant life, in its bedrock.

This new discovery alters the entire theory behind Global Warming caused by humans. The University of California at Davis environmental scientist and co-author of the study, Ben Houlton, said, “This runs counter the centuries-long paradigm that has laid the foundation for the environmental sciences.”

Now, pay very close attention to the word “paradigm” which he is using. Clearly, if Houlton’s discovery of a vast storehouse of nitrogen is correct, then it would have an enormous impact on global warming predictions. Why?

Climate scientists have long known that plants offset some of the effects of climate change by absorbing and storing CO2. But climate scientists assumed that the ability for plants to perform this function was limited because the availability of nitrogen in the atmosphere was limited.

A 2003 study published in the same science journal stated, “There will not be enough nitrogen available to sustain the high carbon uptake scenarios.” You see scientists who have NOT been on the payroll for Global Warming understand this is all nonsense. Ronald Amundson, a soil biogeochemist at the University of California at Berkeley, publicly told Chemical and Engineering News that “If there is more nitrogen there than expected, then the constraints on plant growth in a high-CO2 world may not be as great as we think.”

Remember high school science class? Remember that with more nitrogen available, then plant life will still grow? And guess what, they absorb more CO2 than climate scientists have been estimating. That means the dire forecasts that we have 12 years to live being championed by AOC and the Democrats are completely inaccurate. The planet won’t warm as much with plant life absorbing the CO2 mankind pumps into the atmosphere.

Nevertheless, because this field of research is not under global warming grants, we should not expect this information to ever make it to the mainstream media.