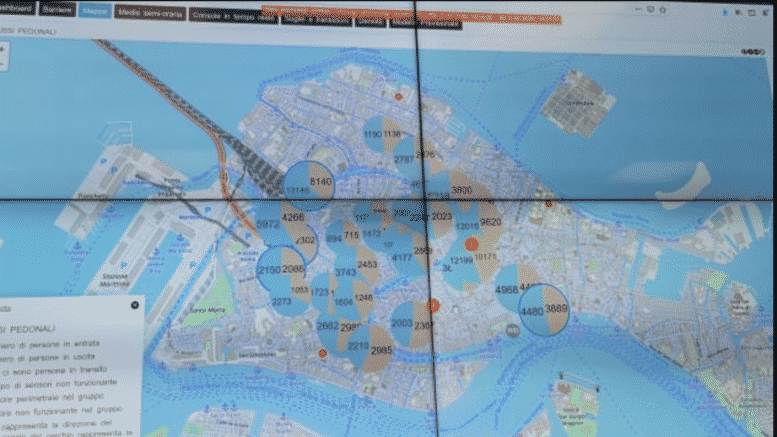 Please Share This Story!
PDF 📄
Smart City surveillance takes on a special role in cities dependent on tourism. Venice is perfecting Brave New World concept: “We know in real time how many people are in each part [of the city], and which countries they’re from.” ⁃ TN Editor

They’re watching you, wherever you walk. They know exactly where you pause, when you slow down and speed up, and they count you in and out of the city.

What’s more, they’re tracking your phone, so they can tell exactly how many people from your country or region are in which area, at which time.

And they’re doing it in a bid to change tourism for the better.

Welcome to Venice in a post-Covid world. The canal city may have been known as La Serenissima, or The Most Serene, during its centuries ruling the waves as the powerful Republic of Venice.

In the past few years, however, things have become rather less serene, thanks to the almost 30 million visitors who descend each year on the city of just 50,000 inhabitants.

Before Covid-19 struck, tourists were arriving in often unmanageable numbers, choking the main streets and filling up the waterbuses. Authorities had tried various measures, from introducing separate residents’ lines at major vaporetto (waterbus) stops to bringing in turnstiles that would filter locals from tourists on busy days. A planned “entrance tax,” due to debut in 2020, has been postponed to January 2022, due to the pandemic.

But as well as controlling footfall, the authorities wanted to track tourism itself — not just by registering overnight guests but, in a city where the vast majority of visitors are daytrippers, by counting exactly who is in the city — and where they go.

On the island of Tronchetto, next to the two-mile bridge separating Venice from the Italian mainland, the Control Room opened in September 2020. A former warehouse that had been abandoned since the 1960s, it’s part of a new headquarters for the city’s police and government — a self-described “control tower” for the city.

The building has offices for the mayor, other dignitaries, and a large CCTV room, with cameras feeding in images from around the city, watched over by the police.

So far so normal. But then, across the corridor, there’s the Smart Control Room — another bank of screens with images and information coming live from around the lagoon. They’re not being monitored for crime, though; they’re feeding information to the authorities that will create a profile of the hordes of people visiting Venice. The hope is that gathering the information will not only track footfall now, enabling the authorities to activate turnstiles and start charging for entrance on busy days. Eventually, they hope that the data will help create a more sustainable tourism plan for the future.

“This is the brain of the city,” says Marco Bettini, co-director general of Venis, the Venice-based multimedia and tech company which built the system.

“We know in real time how many people are in each part [of the city], and which countries they’re from.”

Glad I’ve already been, so I don’t feel the need to go there again.

‘New Normal’ Tourism: ‘They’re Watching You, Wherever You Walk. They wouldn’t do that, would they? - philtoday.info