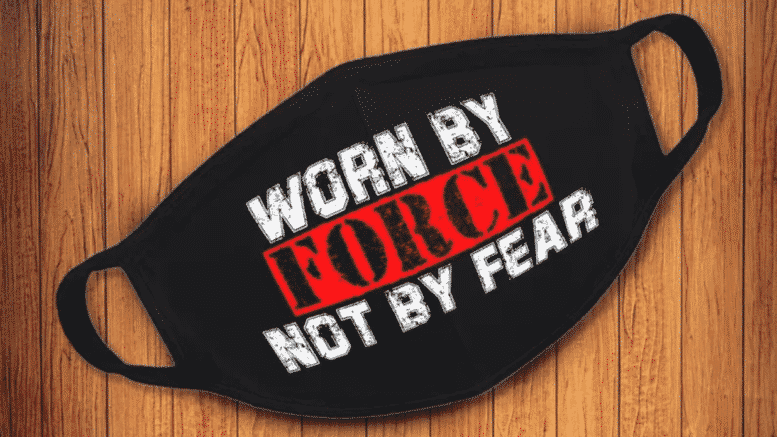 Please Share This Story!
PDF 📄
Oregon lawmakers have abandoned real science that shows the uselessness of masks against viruses, but are fully determined to make citizens to what they tell them to do. Expect boutique face mask stores and kiosks to pop up everywhere now.  ⁃ TN Editor

Oregon is moving to making its indoor mask mandate permanent, meaning the rule will only be able to be repealed in the highly unlikely event of Republicans winning the state.

Authorities are progressing in making compulsory face coverings an indefinite mandate and have taken “the first step in making the rule permanent,” reports KATU.

“The Oregon Health Authority (OHA) convened a Rules Advisory Committee (RAC) on Thursday. The RAC provided feedback on the indoor mask rule. The point of the committee is to suggest what should and shouldn’t be included in the ruling and discuss the impact it will have on the public.”

“Community stakeholders, including those from the hospitality and faith sectors, joined in the meeting. People from the Seventh Day Adventists Church, the High Desert Museum, the Oregon Shakespeare Festival, and McMenamins were a part of the conversation.”

INDOOR MASKING IN OREGON — It's likely here to STAY.

When the OHA publicly announces its intention to make the rule permanent, a period of public comment will follow, although that is largely meaningless and the mandate is likely to be rubber stamped.

Dr. Paul Cieslak, the medical director for communicable diseases and immunizations with OHA, defended the proposal by ludicrously attempting to argue that permanent doesn’t mean permanent.

“Permanent means indefinite. It doesn’t necessarily mean permanent,” Cieslak said. “We can repeal it as well, but we are only allowed to have a temporary rule for 180 days, and anything that goes beyond 180 days, we cannot extend it.”

In other words, once the mask rule is imposed permanently, it will never be repealed until Republicans win the state, something that hasn’t happened since 1984.

“Bureauweenies say they must make the mandate permanent in order to extend it,” writes Dave Blount. “If they still want to extend it now, why would they ever let it end? Even if Covid ever goes away, there is always the flu — plus, you never know when the ChiComs will oblige them by cooking up a new virus.”

There is still no body of evidence that shows mask mandates significantly stop the spread of COVID-19, with large scale investigations like the Danmask study disproving that premise.

At the start of the pandemic, public health “experts” like Dr. Anthony Fauci insisted that face masks shouldn’t be worn and could even make the spread worse, although that rhetoric did a sudden 180 when technocrats realized they were a potent weapon of population control to keep fear levels high.

I live in Oregon, and I can tell you we are refusing to wear masks now in our little town and will continue to do so. We strongly believe they cheat in elections as we have had vote by mail for years, that is why it was implemented for this very reason and since that time we have not had a Republican governor! Our governor is using the Oregon Health Authority to do her dirty work as she cannot mandate this herself legally. The Oregon Health Authority has no authority over the Constitution NONE! We better see lawsuits! As of… Read more »

My daughter broke her finger when she opened the doors on her delivery van and a package fell out. Her employer referred her to a clinic where she had to wear a mask for 4 hours. She has been sick since then. She can’t stay awake, every bone in her body hurts, she’s dizzy, has headaches, drowsiness and general malaise. In 2008, Fauci and two others, published a study examining the autopsies from the Spanish Flu era around 1018. There was evidence that it was NOT Spanish Flu which killed the most people. It was Bacterial Pneumonia. Yet early on,… Read more »

No doubt in my mind that constant mask wearing increases the chances of cancer spreading and other diseases. And that is why certain factions are mandating that everyone wear one as long as they are alive and still breathing. Amazing how a product that was created to be a temporary aid to be used in hazardous or medical environments supposedly will prevent someone from spreading or catching covid. I heard many years ago that oxygen deprivation feeds cancer cells. May God reward the evil doers of this day according to their wicked works.

[…] >CLOWN WORLD (maybe we should boycott it): Oregon “lawmakers” have abandoned real science that shows the uselessness of masks against viruses, but are fully determined to make citizens do what they tell them to do. At the start of the pandemic, public health “experts” like quack and murderer-of-millions-fauci insisted that face masks shouldn’t be worn and could even make the spread worse, although that rhetoric did a sudden 180 when technocrats realized they were a potent weapon of population control to keep FEAR levels high. Authorities are progressing in making compulsory face coverings an indefinite mandate and have taken… Read more »

“Community stakeholders, including those from the hospitality and faith sectors, joined in the meeting. People from the Seventh Day Adventists Church, the High Desert Museum, the Oregon Shakespeare Festival, and McMenamins were a part of the conversation.”

Just ordinary folk, then? No disrespect to the people in these organisations, but is it really a representative cross-section of the community? Why were no flat-earthers, devil-worshippers and ufologists invited? And if you’re going to have Shakespeare represented, what about also including Chekov, Wordsworth and Milton?