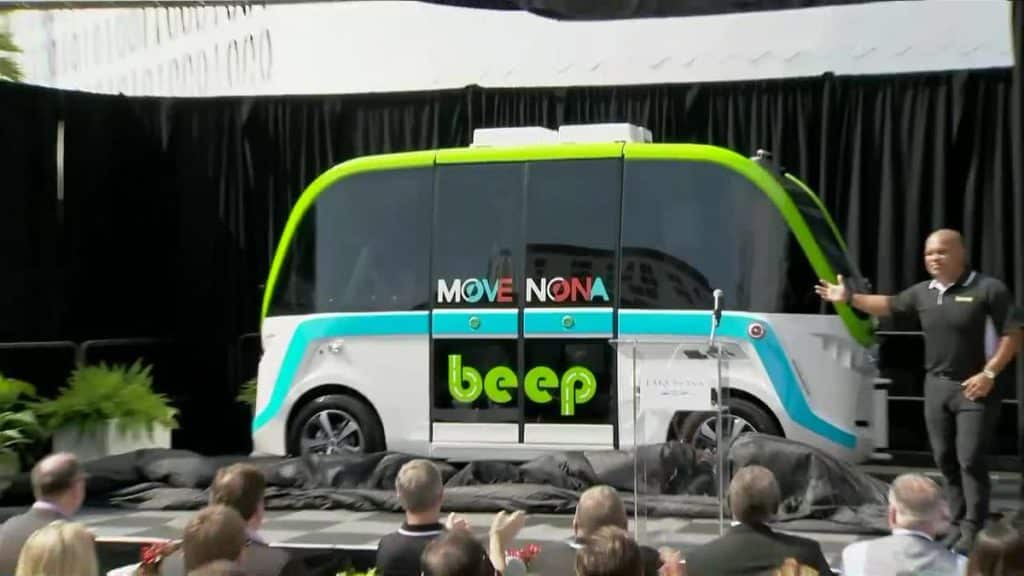 Busses like these are being released around the world, including Australia, Japan, Sweden, Finland, Paris, China and others. Like it or not, self-driving technology is here to stay and will help drive the 4th Industrial Revolution.  ⁃ TN Editor

Officials Tuesday revealed a glimpse of what could one day be the future of transit in Orlando by unveiling a small driverless bus that soon will maneuver around Lake Nona.

The battery-powered vehicle, run by Beep software, is one of two that are expected to begin operating in southeast Orlando this spring. The shuttles are said to be quiet and smooth riding and can carry a maximum of 15 passengers, reaching speeds of 16 mph.

For several years, city officials have studied autonomous vehicles — including embarking on a $300,000 study of the technology — in hopes of launching it one day within the city.

Officials Tuesday revealed a glimpse of what could one day be the future of transit throughout Orlando, in unveiling a small driverless bus that will soon maneuver Lake Nona.

Officials Tuesday revealed a glimpse of what could one day be the future of transit throughout Orlando, in unveiling a small driverless bus that will soon maneuver Lake Nona.

“We want to be one of the autonomous vehicle central points in all of the United States,” Orlando Mayor Buddy Dyer said Tuesday at a media event in Lake Nona.

Beep also announced it would be headquartered in Orlando, with plans to expand across the nation.

In doing so, co-founder Kevin Reid said it would likely have more than 100 employees working there.

Orlando joins a growing list of cities that are deploying the technology in various forms, including Jacksonville, Gainesville, Detroit, Las Vegas and Arlington, Texas.

This vehicle is made by French manufacturer Navya and can run up to nine hours. The company’s buses are located in parts of France, Belgium, Hong Kong, Japan, Australia and the U.S.

It’s run both with artificial intelligence and machine learning, which means the system will work better the more it’s operated.

Upon launch, Reid said it likely won’t carry a cost for passengers and will have an interactive smartphone application to operate it. Routes haven’t yet been finalized.

The rounded bus is about 15 feet long and has space for 11 seated passengers, with four more standing.

While Dyer and Orange County Mayor Jerry Demings were optimistic about the potential of the buses to reduce traffic crashes, there have been issues elsewhere.