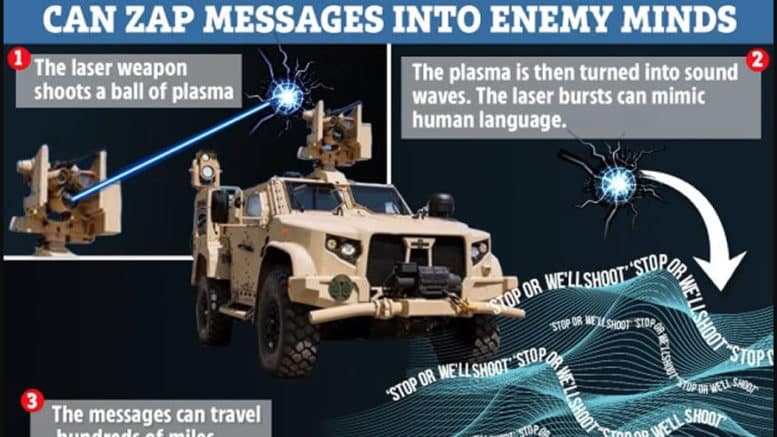 Please Share This Story!
PDF 📄
Talking lasers can send audible messages directly into your head from up to hundreds of miles away. When perfected, this technology will be used by military and civilian applications to control crowds and individuals. ⁃ TN Editor

Military scientists at the Pentagon are developing ‘talking’ lasers which can beam warnings straight into the enemy’s head from hundreds of miles away.

Weapons researchers at the Department of Defense say the hi-tech weapon will be able to send brief messages – in the form of audible speech – across combat zones.

The aircraft, ship and truck-mounted devices are being developed as part of a military initiative called the Joint Non-Lethal Weapons Directorate.

The scientists plan to use a phenomenon of physics called the Laser-Induced Plasma formation to make the laser a reality.

First, they fire a powerful laser that creates a ball of plasma. Then, a second laser works to oscillate the plasma creating sound waves.

He added that the technology could be ready for battle in just five years.

A video shared to publicise the Pentagon project shows the weapon saying ‘Stop or we’ll be forced to fire upon you.’

Scientists say these laser-grams will soon be able to beam hundreds of miles away.

The news will send shudders through the conspiracy theorist community who have long claimed the US government uses radio waves as part of a though-control programme.

The Pentagon has revealed it is ploughing tens of millions into developing state-of-the-art laser weapons – to ensure it doesn’t lag behind Russia and China. 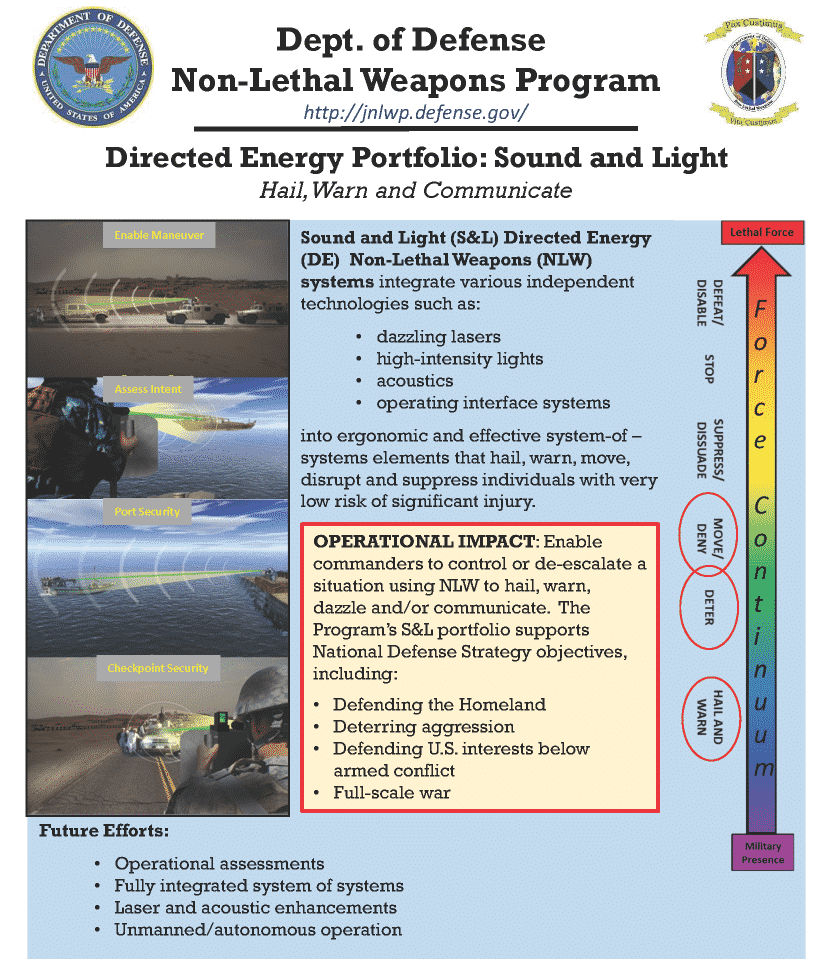 I watched a video about a year or so ago where a former DARPA scientist told the crowd at a seminar in England that they used technology in the Gulf War where they beamed down a voice to some Iraqi soldiers, in one case saying “This is Allah. Lay down your weapons and surrender to the Americans.” At which point they did that very thing. I’m not sure if it was audible or planted into their thoughts. But this technology has been around for a bit. Causes me to wonder about some of the false flag events where an unwitting… Read more »

Finally, someone who posts a little known fact. Good work Philip. The DARPA scientist is telling the truth. The downside for the overlords is that one in every few thousand humans do not respond to this brain intrusion which sounds like a voice from the heavens to the unsuspecting. Nevertheless, I see the testing period is now over.

This has been done with microwaves. Microwave hearing is a known phenomenon. Looks like this laser version is a new thing.