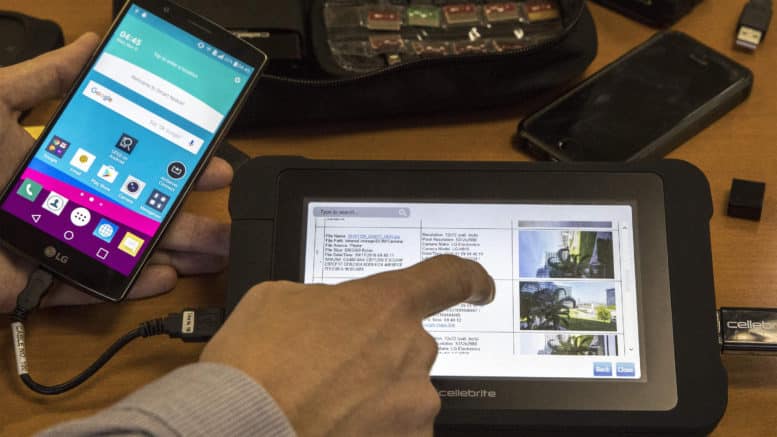 Please Share This Story!
PDF 📄
Technocrats have no moral or ethical boundaries when inventing any device to collect more data. There is no probability that they will stop even if there is a specific law in place forbidding the data collection from cellphones. ⁃ TN Editor

Law enforcement agencies are using a mysterious new tool to unlock the cellphones of criminal suspects and access their text messages, emails and voice messages. Some agencies around the country, concerned about security, are not even acknowledging use of the devices. Adding to the secrecy surrounding the new tool, one of the companies that makes and sells the devices to police and government agencies does not display their products on the company website.

Still, the I-Team was able to get access to a device used by the Montgomery County Sheriff’s Office. Isaiah Kellar, a detective in the Special Investigations Unit, was willing to show us how it works.

“Pretty much anything you do on your cellphone, we’re able to look at through our computer software,” Kellar said.

The device is about the size of a small tablet computer with USB connections to plug in a cellphone. Kellar said bypassing the passcode may take hours or days, allowing the phone data to be downloaded.

Dave Langos, Director of the sheriff’s Criminal Intelligence Unit, said the unlocking of the phone can be critical to a criminal investigation, revealing where that phone has been and potentially placing a suspect at the scene of a crime.

“With the proper search warrant and so forth for the phone the information you retrieve from those is very valuable in solving cases and that has been proven over and over again,” Langos said.

Two major companies produce devices that can hack passcodes and phone security systems. The Montgomery County Sheriff’s Office uses one from the company Cellebrite. Another firm, Grayshift, has a model called the Gray Key.

While the devices are helpful in gathering vital information in police investigations, privacy advocates are concerned about the possibility of abuse by government agencies, employers, or anyone else with access to a hacking device.

Dale Carson, a Florida-based attorney and former FBI agent said Congress should step in and regulate the use of the devices to guard against abuse.

“. . . former FBI agent said Congress should step in and regulate the use of the devices to guard against abuse.” –As if that will prevent it. . . .