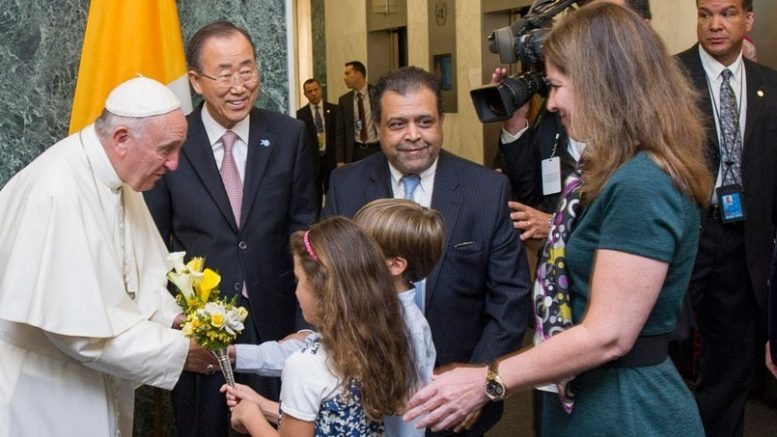 With the Pontifical Academy of Sciences gathering, Technocracy seems to be fully embedded at the Vatican, with the Pope as chief proponent. Religion (including the Interfaith movement) and Sustainable Development are merging at a breakneck speed. Will this become the new world religion around which everyone will congregate? ⁃ TN Editor

Pope Francis received participants in the Plenary Session of the Pontifical Academy of Sciences on Monday. The gathering of leading scientists from a broad spectrum of fields is exploring how scientific advances affect the sustainable development of human societies and their environments. The eminent physicist Stephen Hawking was one of the first speakers on Saturday. He gave a presentation on his No-Boundary proposal concerning the beginnings of the universe.

In his address on Monday, the Pope said: “It falls to scientists, who work free of political, economic or ideological interests, to develop a cultural model which can face the crisis of climate change and its social consequences…”

The Holy Father also called on political leaders informed by the best efforts of the scientific community to craft laws and a binding international structure of norms to safeguard the created order and the human ecology at the centre of it.

He said: “It has now become essential to create, with your cooperation, a normative system that includes inviolable limits and ensures the protection of ecosystems, before the new forms of power deriving from the techno-economic model cause irreversible harm not only to the environment, but also to our societies, to democracy, to justice and freedom.”

The Plenary Session of the Pontifical Academy of sciences which opened on 25 November, will close today.

This Synagogue of Satan has certainly expanded its influence in numerous agendas over the past 2000 years. The ‘institution’ and its many leaders, henchmen, and followers have foisted plans of innumerable damage upon civilization and dare I say the souls of mankind. Under the guise of christianity they have infiltrated all aspects of humanity on earth. Their influence incompasses: Science – Education – Politics – Economics – Religion – Entertainment – Communication. Every venue and organization of mankind has been indwelt by this evil dynasty and gets its world power through the United Nations. “Pope Francis Encourages Scientists to work… Read more »