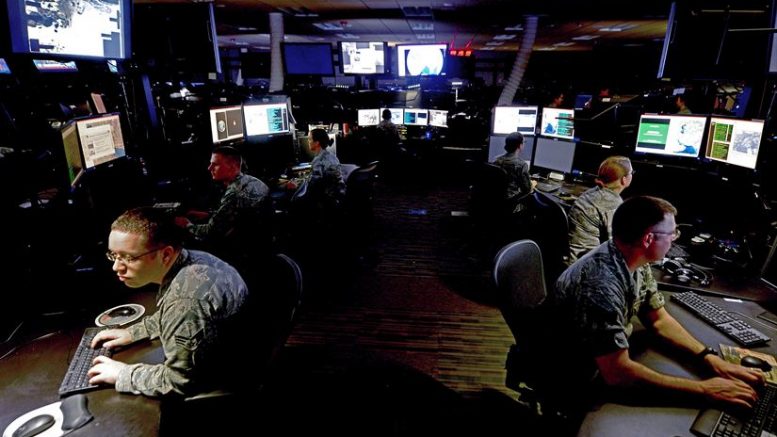 TN has repeatedly warned about the arms race surrounding artificial intelligence, and the military is the perpetrator. This means that AI is being used and refined to kill and destroy around the world. One must ask, what could go wrong with that? ⁃ TN Editor

Winning wars with computer algorithms and artificial intelligence were among the topics that Defense Department intelligence officials discussed during a recent Defense One Tech Summit here.

A stand-alone exhibit titled, “Innovations in Defense: Artificial Intelligence and the Challenge of Cybersecurity,” features Pittsburgh-based team ForAllSecure’s Mayhem Cyber Reasoning System. The system took first place at the August 2016 Cyber Grand Challenge finals, beating out six other computers. The Mayhem CRS is now on display at the Smithsonian’s National Museum of American History. The exhibit was produced by the Lemelson Center for the Study of Invention and Innovation. The exhibit will run through Sept. 17, 2017.

A stand-alone exhibit titled, “Innovations in Defense: Artificial Intelligence and the Challenge of Cybersecurity,” features Pittsburgh-based team ForAllSecure’s Mayhem Cyber Reasoning System. The system took first place at the August 2016 Cyber Grand Challenge finals, beating out six other computers. The Mayhem CRS is now on display at the Smithsonian’s National Museum of American History. The exhibit was produced by the Lemelson Center for the Study of Invention and Innovation. The exhibit will run through Sept. 17, 2017.

Presenters included Marine Corps Col. Drew Cukor, chief of the Algorithmic Warfare Cross-Function Team in the Intelligence, Surveillance and Reconnaissance Operations Directorate-Warfighter Support in the Office of the Undersecretary of Defense for Intelligence.

By the end of the calendar year, the department will field advanced computer algorithms onto government platforms to extract objects from massive amounts of moving or still imagery, Cukor said in his remarks.

“People and computers will work symbiotically to increase the ability of weapon systems to detect objects,” Cukor added. “Eventually we hope that one analyst will be able to do twice as much work, potentially three times as much, as they’re doing now. That’s our goal.”

A computer algorithm is a set of rules to be followed during problem-solving operations. Cukor described an algorithm as about 75 lines of Python code “placed inside a larger software-hardware container.”

He said the immediate focus is 38 classes of objects that represent the kinds of things the department needs to detect, especially in the fight against the Islamic State of Iraq and Syria.

The effort to help a workforce increasingly overwhelmed by incoming data, including millions of hours of video, began in April when then-Deputy Defense Secretary Bob Work announced in a memo that he was establishing an Algorithmic Warfare Cross-Functional Team, overseen by the undersecretary of defense for intelligence, to work on something he called Project Maven.

“As numerous studies have made clear, the department of defense must integrate artificial intelligence and machine learning more effectively across operations to maintain advantages over increasingly capable adversaries and competitors,” Work wrote.

“Although we have taken tentative steps to explore the potential of artificial intelligence, big data and deep learning,” he added, “I remain convinced that we need to do much more and move much faster across DoD to take advantage of recent and future advances in these critical areas.”

“This effort is an announcement … that we’re going to invest for real here,” he said.

“There is no ‘black box’ that delivers the AI system the government needs, at least not now,” he said. “Key elements have to be put together … and the only way to do that is with commercial partners alongside us.”

Work to be accomplished over the next few months includes triaging and labeling data so the algorithms can be trained, the colonel explained.

“That work is inherently governmental and so we have a large group of people — sophisticated analysts and engineers — who are going through our data and cleaning it up. We also have a relationship with a significant data-labeling company that will provide services across our three networks — the unclassified and the classified networks — to allow our workforce to label our data and prepare it for machine learning,” Cukor said.

The department has a significant effort ongoing to procure computational power, including graphic processing units that allow training of machine-learning algorithms, he said. An algorithmic development contract also is in process — the department will go through a competitive selection process to find vendors that can provide algorithms against DoD data.

“You don’t buy AI like you buy ammunition,” he added. “There’s a deliberate workflow process and what the department has given us with its rapid acquisition authorities is an opportunity for about 36 months to explore what is governmental and [how] best to engage industry [to] advantage the taxpayer and the warfighter, who wants the best algorithms that exist to augment and complement the work he does.”

Other aspects of the work include integrating and fielding the algorithms, and once an algorithm is on a platform it must be optimized over its lifecycle, Cukor said.

“We are in an AI arms race,” Cukor said. “ … It’s happening in industry [and] the big five Internet companies are pursuing this heavily. Many of you will have noted that Eric Schmidt [executive chairman of Alphabet Inc.] is calling Google an AI company now, not a data company.”

The colonel described the technology available commercially, the state-of-the-art in computer vision, as “frankly … stunning,” thanks to work in the area by researchers and engineers at Stanford University, the University of California-Berkeley, Carnegie Mellon University and Massachusetts Institute of Technology, and a $36 billion investment last year across commercial industry.

“No area will be left unaffected by the impact of this technology,” he added.

For now, many tasks, like computer vision, are ready for AI capabilities and many are not, Cukor said, noting that “AI will not be selecting a target [in combat] … any time soon. What AI will do is compliment the human operator.”

Before deploying algorithms to combat zones, Cukor said, “you’ve got to have your data ready and you’ve got to prepare and you need the computational infrastructure for training.”

Also needed are algorithm developers and software engineers, he said, an interface must be developed between AI and human operators, and ultimately integration and optimization will be needed over the deployment lifecycle.

“All of these things have got to be put in harmony over the next 36 months as we move down this path,” Cukor said.

Who to say they will use these weapons on we the innocent citizen, or have they
already?

This is called working in a framework (2d), same as compartmentalization but with far less foresight. The greatest weaponry is being used today against whole populations and all life and few have a clue about any of it at every level of Banking, Industry and other “business” as militarism is nothing more than a business to kill life, no mater how big or small. There is no greater perversion that runs the table of all that is sick and twisted as militarism which is owned and run by the bankers, bought off policy makers, industrialists, big ag/pharm/naro/police statists.