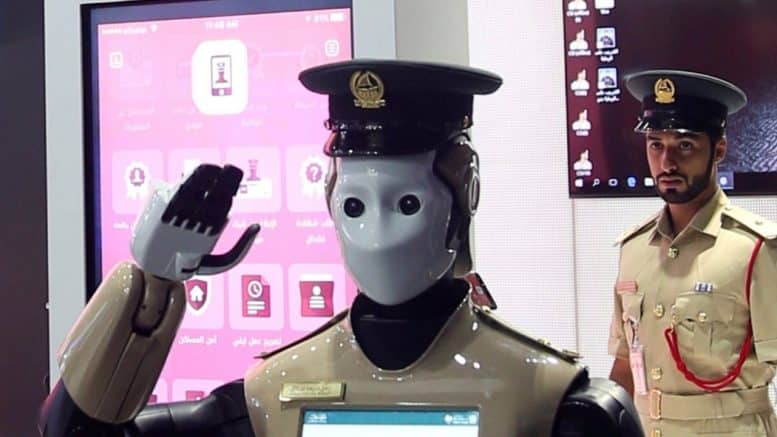 Autonomous police cars would certainly be efficient, but they would have no capacity for broad situational awareness, compassion or judgement. However, it would be a Technocrat dream to have robo-cops everywhere and leave humans out of it. ⁃ TN Editor

The era of police hiding behind bushes and catching drivers who exceed 30 miles per hour may be coming to an end. In years, maybe decades, the young officer with a quota could be replaced by a robotic cop car.

Unsympathetic to excuses and invulnerable to flirtation, the robot will flash its lights to pull you over. It will scan your driver’s license, decide whether to issue a warning or ticket, and inform you of its decision before letting you drive off.

The concept is outlined in a Ford patent filing for a self-driving cop car capable of using artificial intelligence “to find good hiding spots to catch violators of traffic laws.” An optional human passenger could override settings that prevent the car from breaking traffic laws itself.

It’s unclear how far along the idea is in development, but experts and policymakers are grappling with the concept that was quietly filed with the U.S. Patent and Trademark Office more than a year ago before recently attracting widespread attention after a blogger noticed it.

The idea’s public airing comes as self-driving technology hits its stride, transitioning from testing to broader deployment for everyday use.

Uber has dispatched driverless cars to cities such as Pittsburgh, with more than 2 million miles driven. Waymo, a self-driving car company owned by Google’s parent firm, has 4 million test miles and plans to start its own ride-hailing service in Phoenix this year. It’s buying thousands of self-driving Chrysler Fiat-built minivans for rapid U.S. expansion.

Many companies have joined the rush. Tesla and Mercedes-Benz are unveiling partially self-driving cars, and General Motors plans to release a fully autonomous car without a steering wheel next year.

Ford, the robot-cop patent-filer, invested $1 billion in the firm Argo AI last year to develop self-driving technology as part of a five-year plan to make thousands of vehicles available for car-sharing and ride-hailing services.

Right now, self-driving carmakers have a fairly free hand. State laws create a patchwork of rules, but may soon be swept away by overriding federal regulation. Congressional lawmakers are debating bills that would expressly allow the vehicles and give the National Highway Traffic Safety Administration regulatory power over design and safety. For now, voluntary NHTSA guidance seeks to foster both innovation and safety.

Ford declined to comment on the cop car beyond a statement from Alan Hall, communications manager for autonomous and electric vehicles, who said: “We submit patents on innovative ideas as a normal course of business. Patent applications are intended to protect new ideas but aren’t necessarily an indication of new business or product plans.”

Amid technological advances, however, some experts believe real-world adoption of the concept is an almost inevitable.

“A widely-distributed, autonomous police presence is not hard to imagine. We have to ask: Do we want to live in a world blanketed with autonomous police cars?” asked Ed Walters, who teaches at Georgetown University’s law school and at Cornell Tech.

Why fear the robocop?

Privacy concerns, uncertainty about the effect of automation on police jobs, and doubt about robot performance are among the biggest issues raised by people who take a dim view of the conceptual cop car.

The skeptics include Rep. Val Demings, D-Fla., a former chief of the Orlando Police Department and one of the few former law enforcement officers serving in Congress.

“One of the greatest gifts a law enforcement officer has is his or her ability to use discretion,” Demings said. “Automation has its place, but it could never replace the wisdom, courage, and compassion found in an officer’s heart and soul.”

All they have to do is turn off the usual siren and have it play the Star Spangle Banner and all the perps would get down on their knee. 😉