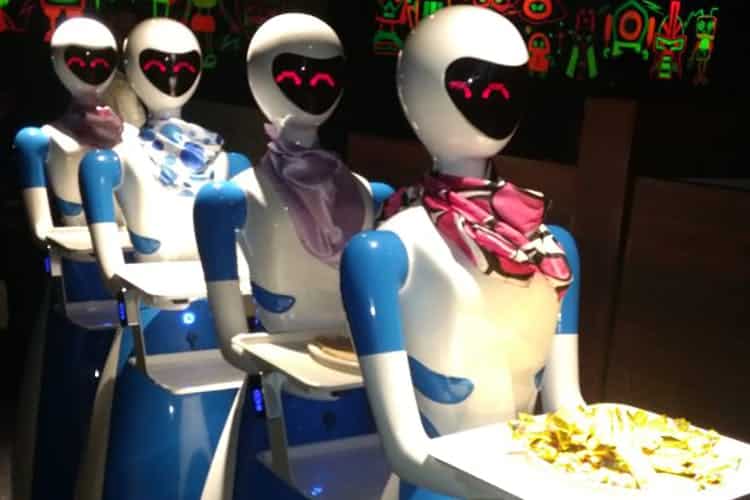 Restaurant Robots May Upend The Food Industry, Or Not

Restaurants have traditionally provided a solid foundation for entry-level jobs in society. As robots displace young workers, the possibility exists that, after the novelty wears off, the public will completely reject restaurant automation, leaving Technocrat inventors shaking their heads. ⁃ TN Editor

Is the rise of the robot the demise of the restaurant server, chef and bartender? Restaurants like Spyce are leading the way with robots that cook complex meals on-demand. Companies such as OTGreimagined the restaurant airport experience and replaced servers who take customer orders with self-ordering tablets. A study by the Center for an Urban Future found that the automation potential for waiters and waitresses is 77%.

That figure increases to 87% when you factor in workers that prep food. This doesn’t mean all these jobs will be automated, but it is a stark reminder that automation has and will continue to reshape the workforce in ways that impact workers and change the customer experience.

The type of experience a business wants to provide its customers, combined with forces like labor and real estate costs, will influence the rate at which automation replaces humans and disrupts the traditional workflow.  For example, technology is available to automatically pull espresso shots and make cappuccinos. But the number of coffee shops employing baristas appears to have grown. This seems counterintuitive, but is influenced by the consumers’ desire to enjoy an authentic coffee shop experience that includes a handcrafted espresso drink with a touch of human interaction.

But operational efficiencies for businesses, consumers’ desire for convenience, and their evolving purchasing habits could turn your bearded barista into an endangered species.  Increasing labor costs, no tip credit or the potential loss of it for full service restaurants, and greater efficiencies have already been cited by restaurateurs as a reason they’ve digitized some of their workforce.

Although some restaurants have replaced servers or counter staff with self-ordering tablets, they still rely on humans to bring the food to your table or pack your food to go. Companies like Bear Roboticscould change that, just read their tagline ‘Reshaping the Restaurant with Robotics & AI.’

The robot they’ve developed can be seen on their website delivering cuisine to diners’ tables. And while the robot may not provide the same human hospitality as a person, they can create an futuristic experience. With further advances in technology, these robots will be able to deliver aspects of hospitality like being courteous and helpful, just without the actual human touch.

Restaurant delivery personnel aren’t safe from technology if you live in a city. Imagine if you ordered a pizza from your local pizzeria and instead of a delivery person standing at your door with pizza in hand, a small car-like vehicle appears, its top pops open and you take your pizza out. Companies like Marble have built sidewalk delivery robots, which they are developing to become fully autonomous in dense urban environments where they’ll navigate people and all the obstructions found on city streets and sidewalks.

It’s not far-fetched to imagine that instead of a high school student delivering your pizza in the suburbs, a self-driving car will pull down your driveway, a little robot will get out and bring the food up to your front door. And while customers may not crave human interaction from restaurant delivery, there’s a different expectation when it comes to seeing your barkeep at the local pub.