Robots Replace Soldiers In First Breaching Exercise Of Its Kind 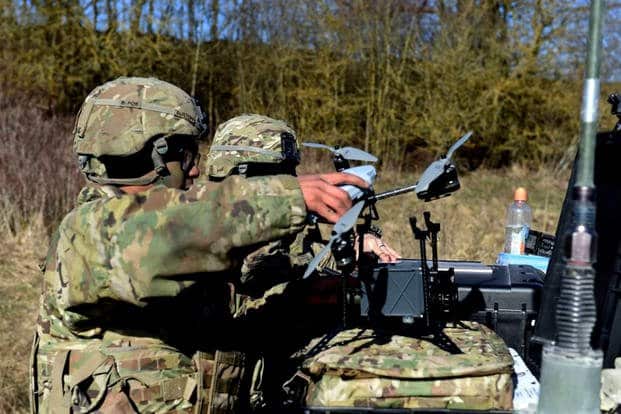 As the global military arms race escalates, it is becoming more certain that WWIII will be fought primarily with robots equipped with AI. Augmented reality will replace face-to-face combat and the specter of death will be minimized. ⁃ TN Editor

Humans took a backseat during a base exercise on Friday, in which robots cleared obstacles for manned tanks and fighting vehicles.

U.S. and British troops participated in the Robotic Complex Breach Concept demonstration, during which several remote-controlled vehicles performed a task usually carried out by soldiers.

“We did a robotic breach today, which has never been done before. This is a historic moment,” said 1st Lt. Cody Rothschild, an officer with the 1st Infantry Division’s 2nd Armored Brigade Combat Team, currently on rotation in Europe. “This is a great step forward for the Army, and for robotics.”

The rotational armor brigade was the main armor element during the exercise. It provided suppressing fire with M1A2 Abrams tanks and Bradley Fighting Vehicles, while remote-controlled U.K. Terrier engineering vehicles cleared a simulated minefield and bridged a tank trench.

Breaching enemy obstacles is one of the most dangerous tasks on a battlefield, said British Warrant Officer Robert Kemp.

“Any breach like this will have enemy weapons trained in on the area,” Kemp said. “Roboticizing breach operations takes away the risk of life and makes clearing enemy obstacles much safer.”

This is great news for the engineers who would otherwise be on the front lines of an assault.

“It keeps us safe from being out there like sitting ducks,” said Pvt. Jonathon Ramirez, an engineer with 2ABCT.

“As an engineer, this means a lot to me,” said 1st Lt. Felix Derosin, a platoon leader with the 2ABCT. “The casualty rate for a breach is expected to be 50 percent. Being able to take our guys away from that, and have some robots go in there, is a very positive thing for us. In the future, this can save engineers’ lives.”

The Terriers were controlled by British soldiers several hundred feet away, inside U.S. Bradley Fighting Vehicles.

Besides the Terriers, the troops used other roboticized systems, such as an unmanned M113 armored personnel carrier, to deliver walls of thick, white smoke to help cloak the breaching operation.

The drill also employed several models of drones, including the Puma Unmanned Aerial System to gather intelligence and the Instant Eye UAS to search for possible chemical weapons.