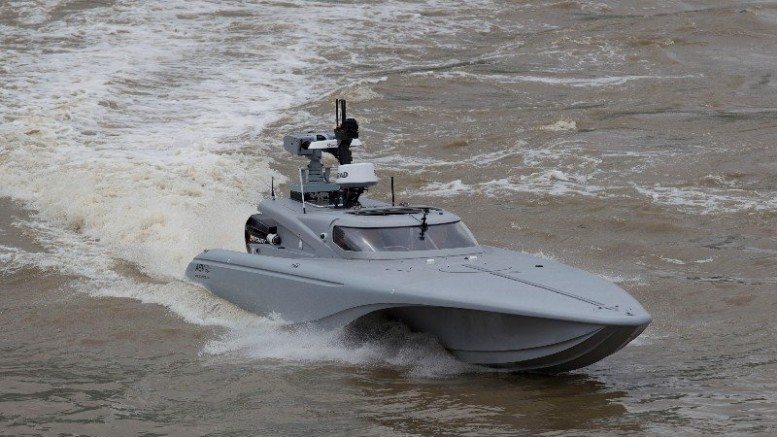 As reported before, the modern global military arms race is about autonomous warfare that relies on robotic ships, drones and firepower. While the UK says these speedboats are currently unarmed, they also talk about their use in defensive maneuvers that would require lethal force. ⁃ TN Editor

A drone speedboat that could pave the way for a Royal Navy robot fleet of high-speed reconnaissance and surveillance vessels has been unveiled by defence scientists.

The 34ft boat can skim across the waves at more than 50kts to track high speed targets, while navigating and dodging other ships without the control of a human.

The unarmed test craft is one of 40 prototypes to be tested by the Royal Navy in a major robot war game off the coast of northern Scotland in October.

The dawn of unmanned vehicles is likely to have the same revolutionary effect on naval warfare as the birth of flight and aircraft carriers, according to the navy’s Fleet Robotics Officer.

Cdr Peter Pipkin said: “This is a chance to take a great leap forward in maritime systems – not to take people out of the loop but to enhance everything they do, to extend our reach, our look, our timescales, our efficiency using intelligent and manageable robotics at sea.”

MAST has been built for the MoD’s defence laboratories and is based on an existing Bladerunner speedboat, but fitted with sensors and robotic technology that is still largely classified.

The boat has a sophisticated anti-collision system to avoid hazards and other craft, but current laws meant that when it was unveiled on the Thames, it had to have a human coxswain on board.

While the MAST is only a test platform for new technology and will not enter service as it stands, sources said it could it pave the way for future robots vessels that can track, shadow or spy on other craft as well as loitering off coastlines.

Elizabeth Quintana, director of military sciences at the Royal United Services Institute, said the Navy was looking at unmanned vehicles to take on “dull, dirty, and dangerous” jobs.