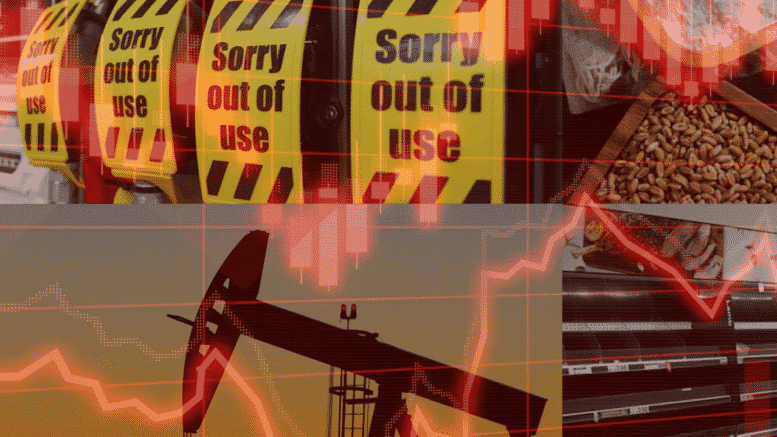 Please Share This Story!
PDF 📄
Sanctions on Russia are killing the West, not Russia. Why? Because the war is not about Russia, but rather killing capitalism and Free Enterprise, which is a requirement for the Great Reset, aka Technocracy, to take over the world. This insightful article is a must read. ⁃ TN Editor

Soaring oil prices, energy and food crises on the horizon…is it possible the REAL target of this economic war is us?

The first tweet I saw when I checked my timeline this morning was from foreign policy analyst Clint Ehlirch, pointing out that the Russian ruble has already started recovering from the dip created by Western sanctions, and is almost at pre-war levels:

The Russian Ruble is nearing its pre-invasion value.

Sanctions were designed to collapse its value. They failed. pic.twitter.com/OLmVIsS34E

Ehrlich states, “sanctions were designed to collapse the value of the Ruble, they have failed”.

…to which I can only respond, well “were they?”

…and perhaps more importantly, “have they?”

Because it doesn’t really look like it, does it?

If anything, the sanctions seem to be at best rather impotent, and at worst amazingly counterproductive.

It’s not like the US/EU/NATO don’t know how to cripple economies. They have had years of practice starving the people of Cuba, Iraq, Venezuela and too many others to list.

Now, you could argue that Russia is a larger, more developed economy than those countries, and that’s true, but the US and its allies have previously managed to hurt the Russian economy quite drastically.

As recently as 2014, following the “annexation” of Crimea, Western sanctions were tame compared to the recent unprecedented measures, but crucially the US massively increased its own oil production, then later that year (following a visit by US Secretary of State John Kerry) Saudi Arabia did the same.

Despite objections from other members of OPEC – Venezuela and Iran chiefly – the Saudis flooded the market with oil.

This kicked Russia into a full recession and saw Russia’s GDP shrink for the first time under Putin’s leadership.

Again, just two years ago, allegedly as part of competing with Russia for a share of the oil market, Saudi Arabia once more flooded the market with cheap oil.

So, the West does know how to hurt Russia if it really wants to – by increasing oil production, flooding the market and tanking the price.

But has the US increased its oil production this time round? Have they leant on their Gulf allies to do the same?

In fact, in a point of beautiful narrative synchronicity, the US claims it’s “unable” to increase its oil production due to “staff shortages” caused by that gift that keeps on giving – Covid.

Similarly, Saudi Arabia is not tanking the oil market, but deliberately increasing prices.

Yes, right now, with the Western allies locked in an alleged economic war with Russia the price of oil is soaring, and may continue to do so.

This is good news for the Russian economy, to the point it may even make up for the damage done by the brutal sanctions.

The high price of oil and need “not to rely on Putin’s gas” or “de-Russify” our energy supply will doubtless result in millions being poured into “green” technology.

Those Western sanctions are targeting other Russian exports too, including grains and food in general.

Russia is a net exporter of food, meaning they export more food than they import. Conversely, many countries in Western Europe rely on imported food, including the UK which imports over 48% of its food supply.

If Europe refuses to buy Russian food, the net effect is that Russia has food…and the West doesn’t.

And, just as with oil, increasing food prices will help rather than hinder the Russian economy.

Take wheat for example, of which Russia is the biggest exporter in the world. The vast majority of this wheat is not even sold to Western countries – but instead to China, Kazakhstan, Egypt, Nigeria and Pakistan – and so is not even subject to sanctions.

Nevertheless, the sanctions, and the war, have actually driven the price of wheat up almost 30%.

This is good for the Russian economy.

Meanwhile, according to CNN, the US is likely to enter a full-blown recession by 2023, France is considering food vouchers and countries all over the world are expected to begin rationing fuel.

So, the sweeping sanctions imposed against Russia by the West, allegedly in response to the invasion of Ukraine, are not having their stated aim – tanking the Russian economy – but they are driving up the price of oil, creating potential energy and food shortages in the West and exacerbating the “cost of living” crisis created by the “pandemic”.

You should always be wary of anybody – individual or institution – whose actions accidentally achieve the exact opposite of their stated aim. That’s a simple rule to live by.

Remember how Orwell described the evolution of the concept of war in 1984:

War, it will be seen, is now a purely internal affair. In the past, the ruling groups of all countries, although they might recognize their common interest and therefore limit the destructiveness of war, did fight against one another, and the victor always plundered the vanquished. In our own day they are not fighting against one another at all. The war is waged by each ruling group against its own subjects, and the object of the war is not to make or prevent conquests of territory, but to keep the structure of society intact.

Recall that “the worst food shortages for fifty years” were predicted as a result of Covid. But they never materialised.

Likewise, we were due to experience Covid-related energy disruptions and power cuts. Short of the UK’s damp squib of a “petrol crisis”, they never really arrived.

Increased food prices, decreased use of fossil fuels, lowering standards of living, public money poured into “renewables”. This is all part of a very familiar agenda, isn’t it?

Regardless of what you feel about Putin, Zelensky, the war in general or Ukrainian Nazis, it’s time to confront the elephant in room.

We need to be asking: What exactly is the real aim of these sanctions? And how come they align so perfectly with the great reset?

The agenda is to remove all national “governments” and simply establish a scientific dictatorship, aka Technocracy.

[…] Read More: Sanctions On Russia Being Used To Hasten The Great Reset […]

[…] Read More: Sanctions On Russia Being Used To Hasten The Great Reset […]

“If you don’t know who you are or who your enemy is, you will lose every battle.”