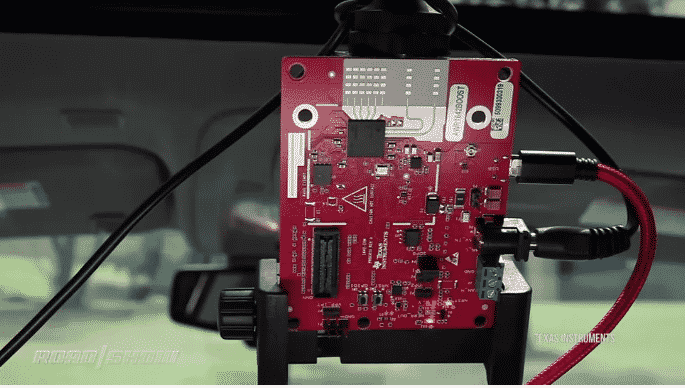 TI's millimeter wave radar for cars can be mounted on a headliner, near a rear view mirror or in the back of a seat. It can detect people inside and outside the car. Image: Texas Instruments

Millimeter-wave radar can ‘see’ things inside you car that a camera cannot detect, tracking even more of your driving habits and things like your respiration and heart rate. When cars communicate to other cars, how will this data be protected? ⁃ TN Editor

Your car has long been a sanctuary on wheels but that won’t be true for much longer. Car manufacturers will soon be adding radar and lasers inside the cabin to monitor who you are and what you do, and that will mean even more of your personal habits being tracked.

Millimeter-wave radar is perhaps the most intriguing in-car detection tech. The apparatus itself can be compact because its frequency is so high and therefore its emitted wavelength is short. I’ve seen several examples about the size of a card deck that could easily be mounted on the headliner of a car and look down at its cabin. Texas Instruments has been showing carmakers how that view can not only detect objects in the vehicle but also classify them as an adult, a child or even a dog.

Mount that same radar inside a seat and you can detect small movements in the driver’s body that, with enough computing power, can be translated into a reading of respiration rate.

Startup Caaresys imagines its radar-based system monitoring the respiration and heart rates of everyone in the car, with a particular focus on sensing a child that might be hidden from view in the back and potentially left behind in the car.

Unlike other smart sensing scenarios, like an Amazon Go store where cameras dominate, car interiors are cramped and filled with obstructions like seats. Radar has the benefit of being able to see through a lot of things that block a camera’s view. And while much of the current work is aimed at human-driven cars, the same radar technology could detect passenger orientation in future self-driving cars, which may not always be facing forward. Airbags and other passive safety systems could use smart radar sensing to configure themselves in a crash based on who is facing which direction.

Even biometrics that aren’t necessarily gathered by the car can be used to monitor you. BSecur said each of us has a unique ECG/EKG signature that can be used to unlock a car or monitor our condition while driving. That heart pattern could be tracked for the car’s processors by sensors in the steering wheel or via a smartwatch.

Not all car-cabin radar is about our bodies and faces: Vayyar is working with auto mechatronics company Brose to sense obstacles in the path of a car door, including nearby poles, walls, cyclists or other parked cars, and then block the door from opening too far via a limiter. That’s bad news for paintless dent-removal guys, but great news for cyclists who live in fear of being doored.

Radar is far from the only game in town though. Cameras are already used in a few cars to monitor a driver’s gaze and eye state for inattention and drowsiness. The Cadillac CT6 pushed this envelope with its Super Cruise partial autonomy that watches the driver’s face to determine if they are looking away from the road for too long. A huge number of similar applications are about to arrive from Mazda, Hyundai, Kia, BMW and autonomous EV startup Byton.