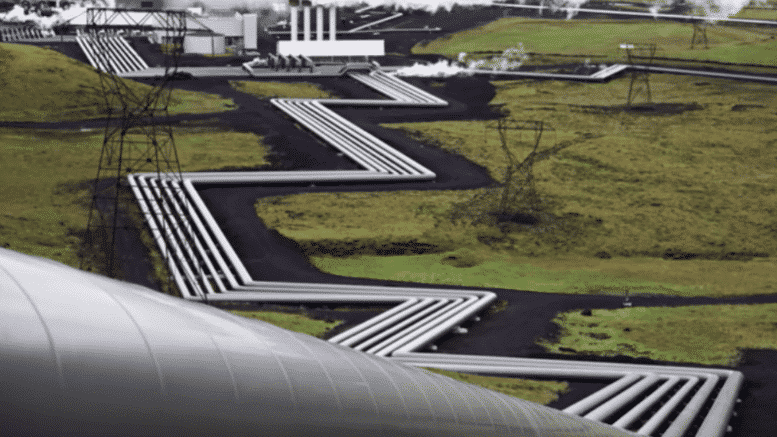 TN Note: Is carbon a serious threat to the future of mankind? Hardly. CO2 is necessary for plants to grow and produce food for humans. If nations run down this rabbit hole to permanently sequester carbon into hard rock, then plant growth will diminish along with global populations.

Carbon dioxide has been pumped underground and turned rapidly into stone, demonstrating a radical new way to tackle climate change.

The unique project promises a cheaper and more secure way of burying CO2 from fossil fuel burning underground, where it cannot warm the planet. Such carbon capture and storage (CCS) is thought to be essential to halting global warming, but existing projects store the CO2 as a gas and concerns about costs and potential leakage have halted some plans.

The new research pumped CO2 into the volcanic rock under Iceland and sped up a natural process where the basalts react with the gas to form carbonate minerals, which make up limestone. The researchers were amazed by how fast all the gas turned into a solid – just two years, compared to the hundreds or thousands of years that had been predicted.

“We need to deal with rising carbon emissions and this is the ultimate permanent storage – turn them back to stone,” said Juerg Matter, at the University of Southampton in the UK, who led the research published on Thursday in the journal Science.

Matter said the only thing holding back CCS was the lack of action from politicians, such as putting a price on carbon emissions: “The engineering and technology of CCS is ready to be deployed. So why do we not see hundreds of these projects? There is no incentive to do it.”

The Iceland project has already been increased in scale to bury 10,000 tonnes of CO2 a year and the basalt rocks used are common around the world, forming the floor of all the oceans and parts of the land too. “In the future, we could think of using this for power plants in places where there’s a lot of basalt and there are many such places,” said Martin Stute, at Columbia University in the US and part of the research team.

Testing has taken place in the Columbia River Basalts, extensive deposits in Washington and Oregon in the US. India, which has many polluting coal power plants, has huge basalt deposits in the Deccan Traps.

One potential challenge for the new technique is that it requires large amounts of water: 25 tonnes for each tonne of CO2 buried. But Matter said seawater could be used, which would be in plentiful supply at coastal sites. Another is that subterranean microbes might break down carbonate to methane, a powerful greenhouse gas, but this was not seen in the Iceland research.

The researchers re-injected 230 tonnes of the gas, which was dissolved in water to prevent it escaping, down into the basalt to a depth of 400-500m. They used tracer chemicals to show that over 95% of CO2 was turned into stone within two years, “amazingly fast” according to Matter. Edda Aradottir, who heads the project for Reykjavik Energy, said: “It was a very welcome surprise.”

Climate change, AKA CO2, is such a crock of lies that it is embarrassing to any one in the scientific community, not worried about a paycheck, to hear promoted as the cause of potential sudden climate collapse.

There’s only one thing you need to remember about “climate change: no matter WHAT the weather does — it’s your fault!

took place at Iceland’s Hellisheidi power plant, the world’s largest geothermal facility.
In a volcanic zone, existing vents alone would release 1000x more CO2 into the atmosphere than this project could ever hope to store. I don’t get it.