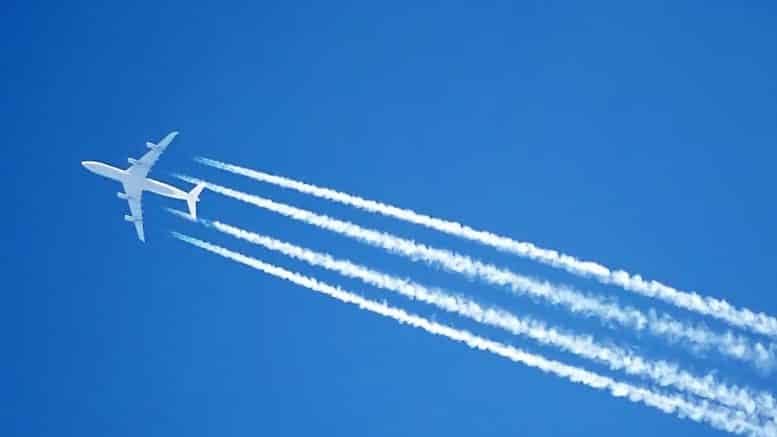 Please Share This Story!
PDF 📄
Speculative chemtrail theories have abounded for years because people are either too lazy or too ill-equipped to do the proper research into the real roots of atmospheric tampering, namely, scientific geo-engineering. The real story behind geo-engineering is much more disturbing than any conspiracy theory. Technocrat scientists are bent on hacking the atmosphere to ‘save’ the planet. There are many geo-engineering scientists to oppose this crackpot scheme. ⁃ TN Editor

It’s 2055. A row of airplanes streak across the sky. They’re barely visible because they’re flying far above the usual traffic of jetliners, transport balloons, and delivery drones.

The mission is to release a cloud of tiny particles into the atmosphere. The cloud creates a barrier that reflects sunlight back into space, keeping it from being absorbed on Earth, where it would further warm the planet.

The planes do this every day, as they have for years.

They’re effective. Because of these planes, there are fewer killer heat waves. Some reports say ice loss at the poles has slowed. There are side effects of altering the atmosphere. Massive droughts have caused famines, and some worry the same technology could be used as a weapon.

That scene, which describes geoengineering, isn’t happening today, contrary to what some conspiracy theorists might tell you. But it soon might. Some scientists think geoengineering could be our last resort to prevent the most catastrophic effects of climate change.

As far out as it sounds, we’ve already seen a lesser form of related experiments with cloud seeding — a way to make it rain by dropping silver ions into the atmosphere — by governments in China and the United Arab Emirates. But the much larger-scale modification of the atmosphere is being worked on already.

This year, a team of scientists at Harvard is hoping to launch what will be the first engineering test flight for one of the first outdoor sky-modifying geoengineering experiments. They know the technology is so risky it might never be safe enough to use, and there are major ethical considerations about who gets to decide what part of the planet gets this treatment, because the effects would be global.

What they discover could one day change the course of planetary history.

Modifying the sky with technology

The term geoengineering refers to the use of technology to modify the planet’s atmosphere, and it comes in two forms: removing carbon dioxide from the atmosphere, and more controversial technologies (as in the scenario above) that modify the skies to temporarily cool the world.

Proponents of geoengineering research argue we need to push ahead with studies so that we can model the risks and benefits of the technology. Modifying the sky could put the brakes on the warming that the world is experiencing. Most scientists say it wouldn’t affect the processes that are making the world warmer, which are mainly driven by greenhouse-gas emissions caused by the combustion of fossil fuels. But it might temporarily stop or slow those effects from getting worse.

Opponents argue the risks of even experimenting with solar geoengineering (also known as solar-radiation management) are too high, that alternatives haven’t been properly explored, and that outdoor experiments are politically dangerous and could eventually lead to military use of weather-altering technology.

Either way, we don’t know whether geoengineering will work. The Harvard experiment could change that.

sooo, it’s okay to bomb Syria for chemical weapons on the people while hypocrites daily drop chem trails on us. I have seen many deer loosing their hair, and on heavy spray days I usually get sick.

WTF !? I thought Technocracy News was up to speed on this issue… this article pretends that aren’t already fully deployed weaponized weather modification program ? This article is total crap… and I’m one of the many researchers to empirically demonstrate the present reality of these “proposed” schemes… this appears to be shilling of “preemptive disclosure”. I’m personally insulted at this kind of crap from TN. This article if nothing but complete disinfo… I thought Technocracy News was independent and working to expose this sort of thing. Instead this article is a complete load of total bullshit.

Stephen – you are missing the point of Technocracy.News, where articles are posted to demonstrate what technocrats are thinking and doing. This is such an article. TN does not approve of geo-engineering and never has. The deep research into geo-engineering has been lacking since the beginning, and a lot of investigation remains to be done. Here is one site that is exposing geo-engineering: https://climateviewer.com/

Total crap article. There is no warming…we are in a carbon deficit and have been for a long time. Technocracy must control everything, even if it isn’t broken. It’s about psychopathic control of everything… Right now, geoengineering is used to wage war against humanity and as a force multiplier. It about vitamin D deficiency. Like Texas, they wouldn’t behave, so hit with a storm of the century, a force multiplier of a cold snap. If they can lower the production of Vitamin D another 10-15% through global shading then then add to the 90% deficiency already existing. The culling continues… Read more »