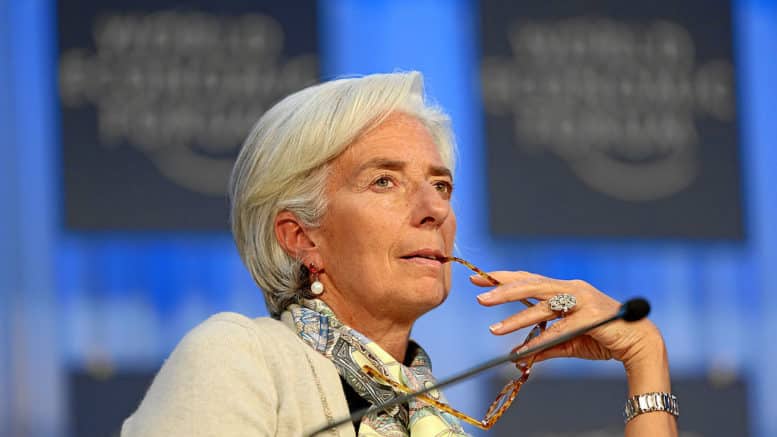 Please Share This Story!
PDF 📄
Christine Lagarde, having switched from the IMF to heading the ECB, has shocked analysts by demanding a ‘key role’ in climate change matters. This is a tectonic shift in the mission of central banks.

Note also that the Minneapolis Fed chair states that its time for central banks to decide how to redistribute wealth.

The two go hand in hand, but confirm that the central banking system is fully complicit, if not causative, in the master plan to implement Sustainable Development, aka, Technocracy.

Ottmar Edenhofer, lead author of the IPCC’s Fourth Assessment Report in 2007 stated, “One has to free oneself from the illusion that international climate policy is environmental policy. This has almost nothing to do with environmental policy anymore.” ⁃ TN Editor

Having failed miserably to “trickle down” stock market wealth for a decade as was their intention, something Ben Bernanke made clear in his Nov 4, 2010 WaPo op-ed, central banks have moved on to more noble causes.

Over the weekend Minneapolis Fed chair Neil Kashkari suggested it was time to allow central banks to directly decide how to redistribute wealth, stating unironically that “monetary policy can play the kind of redistributing role once thought to be the preserve of elected officials”, apparently failing to realize that the Fed is not made up of elected officials but unelected technocrats who serve the bidding of the Fed’s commercial bank owners.

Failing to decide how is poor and who is rich, central bankers are happy to settle with merely fixing the climate.

Overnight, Bank of Japan Governor Haruhiko Kuroda joined his European central banking peers by endorsing government plans to compile a fiscal spending package for disaster relief and measures to help the economy stave off heightening global risks. Kuroda said that natural disasters, such as the strong typhoon that struck Japan in October, may erode asset and collateral value, and the associated risk may pose a significant challenge for financial institutions, Kuroda said.

“Climate-related risk differs from other risks in that its relatively long-term impact means that the effects will last longer than other financial risks, and the impact is far less predictable,” he said. “It is therefore necessary to thoroughly investigate and analyse the impact of climate-related risk.”

Kuroda’s crusade to tame climate came just hours after the ECB’s new chief, Christine Lagarde pushed for climate change to be part of a strategic review of the European Central Bank’s purpose, “spearheading a global drive to make the environment an essential part of monetary policymaking.”

As the FT put it, the plan “underlines Ms Lagarde’s declared goal as president to make climate change a “mission-critical” priority for the central bank. It comes as European Commission president Ursula von der Leyen, whose team on Wednesday was officially endorsed by the European Parliament, is about to unveil her first landmark climate policy package.

“We have reached the point where the reputational risk of doing nothing is large enough that they will have to announce something at the end of the review — the big question is what,” said Stanislas Jourdan, head of Positive Money Europe, a campaign group.

Funny Jourdan should bring up reputational risk: after all he was referring to the criminally convicted former IMF head, who recently incinerated tens of billions in IMF bailout funds in Argentina. The same former IMF head who in April 2016 admitted that for the IMF to “thrive”, the world has to “go downhill”, and that the IMF “to be sustainable” it needs to be “very in touch with our client base” while adding that “when the world goes well and we’ve had years of growth, as was the case back in 2006 and 2007, the IMF doesn’t do so well both financially and otherwise.”

Naturally, Lagarde’s attempt to hijack the ECB’s mission from one of failing to hit an inflation target for years, diverting from Mario Draghi’s disastrous bubble legacy, and from making the wealth divide between the rich and poor the widest it has ever been, and to one of virtually unlimited debt monetization and MMT under the virtue-signalling guise of monetizing fiscal deficits to “save the climate” was promptly frowned upon by real central bankers such as Bundesbank president Jens Weidmann, who said last month that he would view “very critically” any attempt to redirect ECB monetary policy actions to tackle climate change. Then again, as has long been the case, the general public is by now well aware of Weidmann’s “bad cop” act – when push comes to shove, the German always folds, he will fold again.

It wasn’t just Weidmann who was appalled by Lagarde’s mission creep. Overnight, Rabobank’s Michael Every wrote that “just 24-hours after the Daily made the joke that said central banks will be adding a CO2 target to their CPI target, we see the Financial Times report that ECB President Lagarde wants a key role for climate change in the upcoming ECB review; this is apparently being opposed by the Germans, who believe that central banks are only supposed to focus on not-getting CPI right.”