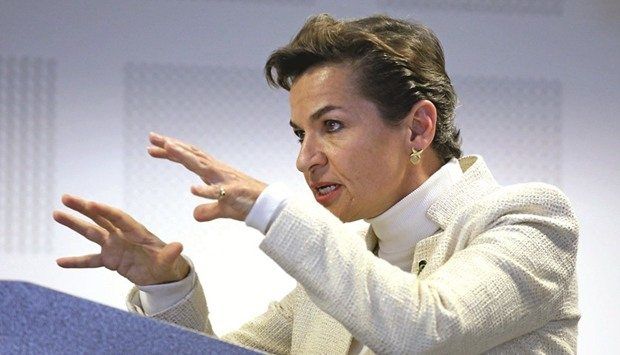 Christiana Figueres announces a new strategy to keep the climate fraud scam alive, namely, ‘soul-searching’ scientists need to do a better job of explaining their science. What Figures has done is sweep all non-believing climate scientists into a soulless class of zombie scientists. For a Technocrat, the term soul-searching scientist might be an oxymoron. ⁃ TN Editor

“We mortals do not understand you.” That’s the heartfelt cry from former UN climate chief Christiana Figueres, pleading with scientists to use everyday language to help counter growing public mistrust.

She was giving one explanation of why scientists are struggling to get their message across to a sceptical public at a major conference in Vienna this week.

Delegates made time for soul-searching at the meeting in the Austrian capital, conceding that they bear part of the blame for alienating some people.

Just days after a historic March for Science in Washington, the experts owned up to failures including remoteness and condescension – and operating in an “echo chamber of likeminded people”.

“I think it’s the conceitedness, in a way,” Heike Langenberg, the chief editor of the journal Nature Geoscience, admitted.

“The problem is that scientists have not spoken at an even level with people who are out there,” she told AFP on the sidelines of a European Geosciences Union (EGU) meeting of more than 14,000 experts in 22 fields. “They have tended to give long speeches and not listen … I think they have underestimated intelligence and overestimated knowledge.”

This has contributed to an erosion of support for science since a high point in the 1960s when humans planted a flag on the Moon.

Led by the United States, a trend has grown since then to challenge certain basic tenets that enjoy overwhelming expert consensus – the benefits of childhood vaccination, evidence for species evolution, and the perils of global warming.

One prominent doubter, Donald Trump, is now in the White House.

He has described climate change as a hoax and linked childhood vaccines to autism.
Since taking office, Trump has moved to curb science spending and gag government researchers.

A 2012 study in the American Sociological Review reported a dramatic loss of scientific faith among US conservatives, from nearly 50% who reported a “great deal” of trust in 1974 to only 35% four decades later.

Liberal views have consistently hovered around the 50% mark.

The “politicisation” of science is a major part of the problem, conference delegates said.
Not only do politicians cherry-pick convenient findings, so creating the impression that research is partisan, but also some scientists have trespassed into what Langenberg described as the “public bazaar of opinions”.

Advancing any view or judgement is a no-no in the evidence-based research sphere, founded on the cardinal acceptance that nothing is ever certain.

The EGU meeting, which gathers annually to scrutinise the latest research in Earth and space science, this year atypically held an introspective debate entitled “Make facts great again: how can scientists stand up for science?”

The motivation was a clear trend of “growing distrust of experts (and) rejection of inconvenient facts”, said EGU president Jonathan Bamber, a glaciologist.

Diplomat Figueres made a plea on behalf of policy-makers. “We are the ones who need to understand and take the implications of what you do and try to translate it into decisions, into policies,” she said. “And if we don’t understand, there’s nothing we can do about it.”
Unlike the awe-inspiring Moon quest, many of today’s science problems tackle complex, controversial and unpleasant themes that touch on humanity’s very survival.
Some research fields threaten major economic interests – for example the coal and oil industries’ vulnerability to climate science showing a need to curb fossil fuel use, or that of soft drink manufacturers to health warnings about sugar.

This can cause vested interests to “speak out and skew the science. That has eroded trust”.

The solution is easy… Lets just replace all of those 14k scientists with an AI.

Funny. It’s now much cooler the last two years at my house. Last two Springs were real ones. Which had not been the case where I live in AZ. These last two Spring seasons have been longer, more cloudy & much cooler. What I see in the ‘climate change in my neck of the woods lends credence to earth moving to cooling, not warming. ‘Coincidently’ many scientists are saying that we are headed to a cooler earth for a while because sunspot activity is slowing down. I am convinced that the man caused global warming stuff is just a ploy… Read more »