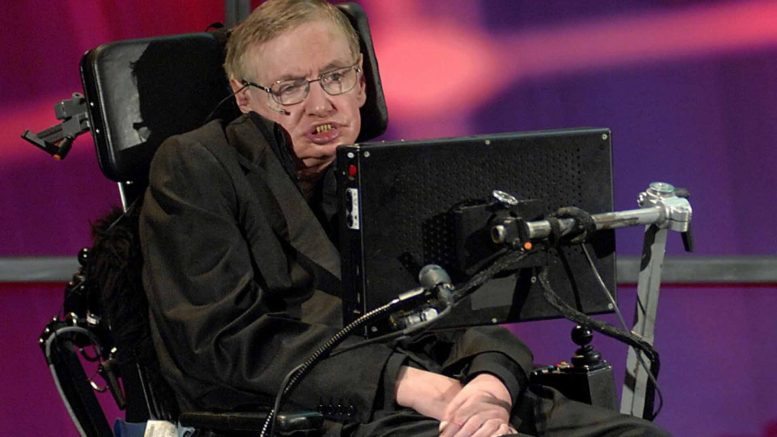 Please Share This Story!
PDF 📄
The growing cult of “We must leave earth” is led by high-level science and tech moguls, like Stephen Hawking, Elon Musk, Ray Kurzweil, Peter Thiel, etc. Mars-lust apparently is not satisfied by anything short of actually going there. We should bid them all adieu in the hope that they will take up permanent residence there. ⁃ TN Editor

Humans will need to colonise another planet within one hundred years to ensure our survival, according to Professor Stephen Hawking.

The astrophysicist has made a new documentary, Expedition New Earth, as part of the BBC’s new science season Tomorrow’s World. In it he will claim that time is running out for Earth and if humanity is to survive climate change, asteroid strikes, epidemics and overpopulation we will need to leave our planet and venture further afield.

In the landmark series, Prof Hawking and his former student Christophe Galfard will travel the world to find out how humans could live in outer space.

It is 14 years since the BBC cancelled its future-gazing series Tomorrow’s World after 38 years on air, but the corporation and the scientists involved promise the new season will be even better.

Prof Brian Cox, the astrophysicist and TV presenter who has been helping curate the series, said: “The original Tomorrow’s World inspired a generation – it certainly inspired me back in the 1970s, but that was a single TV programme.

“The 21st century Tomorrow’s World represents so much more – it represents the institutions of Britain coming together to inspire current and future generations, to convince them to embrace the opportunities that science brings, to foster a spirit of curiosity and tolerance, and to embrace the unknown not in fear but in wonder.”

The BBC has joined forces with the Royal Society, Open University, London’s Science Museum and the Wellcome Trust, to “connect audiences with the brightest minds and institutions in science and technology”.

“We’ve come together behind a simple, and very bold ambition – to equip all of us with the knowledge and understanding we need to make sense of our lives and the future,” said Tony Hall, director-general of the BBC.

“Whether it’s the rise of robotics or the demise of antibiotics, travelling to Mars or the arrival of 3D printed food, science is changing the world at an extraordinary pace.”

Does Stephen Hawking’s know how hot it gets on Mars? Where will the water come from? How will food be grown? Earth is the only inhabited planet in the UNIVERSE. God created it that way. Ge 1:1 ¶ In the beginning God created the heaven and the earth. Notice how He singled Earth as more special than the rest of the universe?

It all reminds me of the 1973 animated French film Fantastic Planet produced by Rene LaLoux.

I don’t understand the cynicism regarding space exploration. Like airplane flights or vehicular transportation, space exploration by itself is not an evil thing. You’d have to somehow make it evil. I guess you could turn space exploration evil if the expressed goal was to create human slave/technocratic societies on Mars (o the Moon or wherever). However, I am unaware of any serious plans of the sort. In fact, I’d argue that the elites would find mass space exploration to be impractical. The human species is much easier to control with a small population that is entirely located on only one… Read more »

hahahaha we do have big ideas of ourselves! have come to the conclusion that nature creates and destroys and within its creation is are the seeds of destruction – which is just where we are now. if it is possible for creatures to travel in space wouldn’t we be meeting them now – as space has always been and will be – infinity – but we aint hahahaha