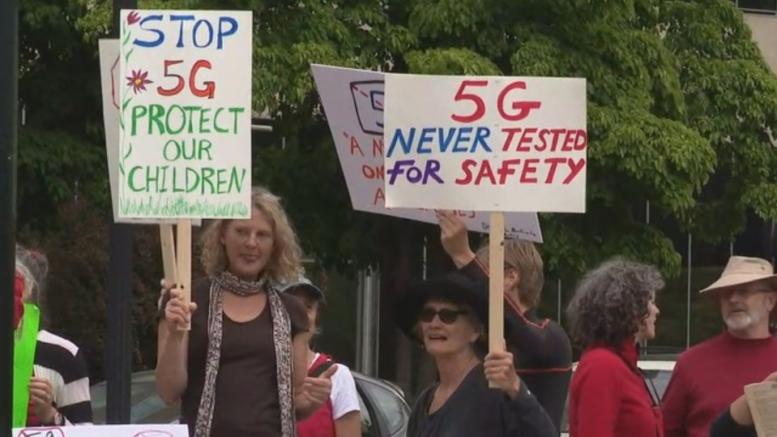 Wrong: "5G NEVER TESTED FOR SAFETY." There are hundreds of peer-reviewed studies on EMF that the 5G industry don't want you to know about! Photo credit: News 13 WLOS staff

Technocrats beware: you have awakened the wrath of the American momma bear by threatening the health and safety of her cubs.

Technocracy in America is critically dependent upon the revolutionary 5G wireless communication technology to provide a real-time circulatory system for massive data collected from devices connected to the Internet of Things.

Since the early 1930s, when Technocracy was originally conceived, total surveillance has been the key requirement to make it happen. Without surveillance, Technocracy dies in its tracks just like a car on the freeway running out of gas.

For modern Technocrats, historical data is only useful for testing and validating Artificial Intelligence programs that are slated to control the ‘Technate’ and everything in it. Again, data is to AI as gasoline is to your car; without it, nothing happens.

Thus, Technocrats lust for a constant flow of real-time data to power their ever-more-sophisticated AI programs that will control society and all of the people in it – um, that includes you and me, friend.

5G is their holy grail and only hope to make Technocracy happen. 5G is truly revolutionary in that it provides a response time of 1 millisecond (versus 15-50 milliseconds on 4G/LTE) and up to 100 times the data throughput. To accomplish this, 5G operates at a much higher frequency range of millimeter waves. The millimeter band covers 30-300GHz whereas the microwave band is 3-30GHz. The problem is that millimeter waves are absorbed by human tissue, and will not pass through your body like lower-frequency WiFi and radio waves; herein lies the health risk that nobody in the industry wants to talk about.

It’s no wonder that the 5G industry is giving its critics and detractors the bum’s rush. It’s no surprise that its leaders have co-opted entire government agencies like the FCC in order to tie the hands of  cities, counties and states, thus allowing the rapid installation of 5G towers everywhere before everyone else wakes up.

In their rush to blanket the country with 5G Small Cell transmitters, all health safety concerns were purposely ignored. Listen to the following video to see industry experts testify under oath that no health studies have been done and there are none slated to be done. Zero. This flies in the face of hundreds of independent, peer-reviewed studies that warn of potentially serious health risks.

Since the name of this journal is Technocracy News & Trends, I will give you a hot ‘trend alert’: The hammer is going to come down on the 5G rollout in America. The industry leaders who have swept aside all health concerns over 5G have inadvertently sparked a nationwide movement of angry ‘momma bears’ who are finally realizing the dangers that 5G poses to their children – especially when micro-cells are placed outside their child’s bedroom.

Websites and protests are popping up in communities all over America. The ‘tell-a-gal’ network is working overtime as one angry mom calls ten others to enlist their help. The ripple is expanding into a tsunami. It’s a beautiful thing to behold.

If you want to put the kibosh on 5G radiation towers in your town, city or county, then just listen to the following 20 minute video. Actually, you must listen to it to understand what is happening.

There are plenty of other resources popping up as well, and here are a few that you can investigate right now. There is a wealth of solid scientific information surfacing that warn of serious health risks and privacy invasion on people’s lives.

The battle over 5G is just beginning, and it is far from over or settled. However, the momentum is rapidly shifting away from the 5G industry bullheads towards an angry citizenry who is increasingly mobilized to fight them at the small cell tower on every street corner.

Now, it’s your turn to go and do likewise. The tools are available. Start your engines.

The Dark Past Of The Bank For International Settlements