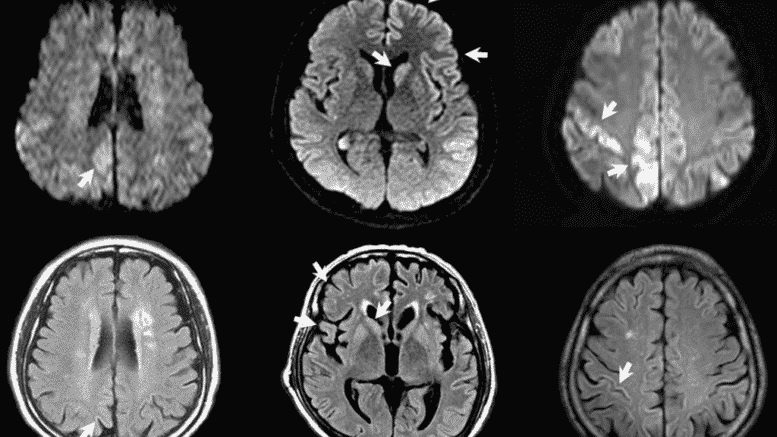 Please Share This Story!
PDF 📄
Prion disease is the animal equivalent of Bovine Spongiform Encephalopathy (BSE), or Mad Cow Disease. It destroys brain tissue, is degenerative, transmissible and fatal. As such,  gene therapy shots have the potential to be a deadly bio-weapon. ⁃ TN Editor

Given that type 1 diabetes is only one of many immune mediated diseases potentially caused by vaccines, chronic late occurring adverse events are a serious public health issue.

The advent of new vaccine technology creates new potential mechanisms of vaccine adverse events. For example, the first killed polio vaccine actually caused polio in recipients because the up scaled manufacturing process did not effectively kill the polio virus before it was injected into patients. RNA based vaccines offers special risks of inducing specific adverse events.

One such potential adverse event is prion based diseases caused by activation of intrinsic proteins to form prions. A wealth of knowledge has been published on a class of RNA binding proteins shown to participating in causing a number of neurological diseases including Alzheimer’s disease and ALS. TDP-43 and FUS are among the best studied of these proteins [2].

The Pfizer RNA based COVID-19 vaccine was approved by the US FDA under an emergency use authorization without long term safety data. Because of concerns about the safety of this vaccine a study was performed to determine if the vaccine could potentially induce prion based disease.

Analysis of the Pfizer vaccine against COVID-19 identified two potential risk factors for inducing prion disease is humans. The RNA sequence in the vaccine [3] contains sequences believed to induce TDP-43 and FUS to aggregate in their prion based conformation leading to the development of common neurodegerative diseases.

Two GGΨA sequences were found. G Quadruplex sequences are possibly present but sophisticated computer programs are needed to verify these.

The spike protein encoded by the vaccine binds angiotensin converting enzyme 2 (ACE2), an enzyme which contains zinc molecules [8]. The binding of spike protein to ACE2 has the potential to release the zinc molecule, an ion that causes TDP-43 to assume its pathologic prion transformation [9].

There is an old saying in medicine that “the cure may be worse than the disease.” The phrase can be applied to vaccines. In the current paper the concern is raised that the RNA based COVID vaccines have the potential to cause more disease than the epidemic of COVID-19.

This concern originates due to potential for misuse of research data on the mechanisms by which certain RNA binding proteins like TDP-43, FUS and others can be activated to form disease causing prions. The fact that this research, which could be used for bioweapons development, is funded by private organizations including the Bill and Melinda Gates Foundation, and Ellison Medical Foundation [2] without national/international oversight is also a concern.

In the past, for example, there were prohibitions for publishing information pertaining to construction of nuclear bombs.

Yes some poor woman died of a “ rare brain disease” five days after Pfizer shot. I am calling it a shot as it is certainly not a vaccine in the sense we are led to understand them.
I will pass and instead feed my immune system with sunshine , fresh air, vitamin d and zinc.
My advice is get on with your lives , take off the dirty, germ ridden rags and enjoy plenty of love and hugs.

Kat; you nailed it!

Bill and Melina..always there to help us along!I pray a whole generation has not been maimed and killed in this BIG EXPERIMENT!!!

Articles have to stop using the word ‘ approved’ regarding the COVID treatments. It is confusing and misleading people. The proper word is ‘ authorized’ Authorized for emergency use for UNAPPROVED products is what the FDA website says.

The fools who are easily swayed by group think, will eventually get what they deserve. “You will own nothing and be happy” because most of you won’t be around. 😉

My husband is going to lose his license to practise medicine in Canada if he does not get the shot. He is one of 3 left at his current place of employment. He will wait until the last day, but will eventually have to get it to support his family. No freedoms left in Trdeau’s canada

This is the worst news and I hope you/he finds a way to fight this scourge of tyranny.