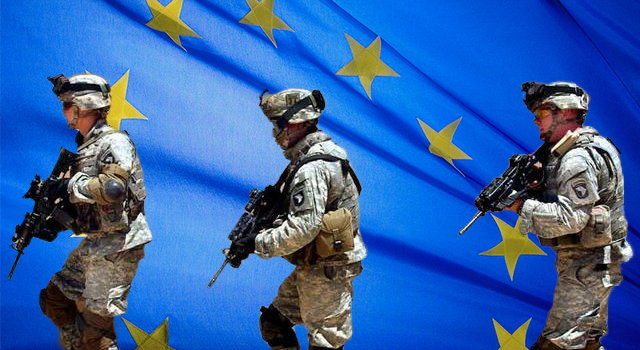 TN Note: The European Union is riddled with unelected, unaccountable Technocrats who have no restraints to tell other nations how to run their countries. The introduction of an EU army that could enforce EU will on member nations is totally disturbing. In particular, that Germany would be at the forefront of this effort is even more disturbing: It was Germany that precipitated two world wars in the last century.

A European Army is now one step closer to becoming a reality, just over 18 months since Britain’s former Deputy Prime Minister Nick Clegg branded warnings that the EU was aiming for such expansionism a “dangerous fantasy”.

Mr. Clegg, among others, have gone quiet with his usual derisory treatment of the EU army warnings in the last few months, as top EU policymakers have elaborated upon their ideas for a pan-European Border and Coast Guard.

Now it looks like the plans are not just formalising, but going further than anyone thought possible, with documents outlining what an EU army would look like, including the ability to take control of national borders without the consent of the government of the nation in question.

In theory, this would mean that EU army members could seize border controls, or lackthereof, from countries like the United Kingdom without the permission of the country’s leaders or elected representatives.

According to the Times, the proposals for a 2,500-strong border and coast guard force could see armed personnel first deployed to areas like Greece or the Balkans.

The paper likens the idea of primarily German soldiers seizing power across Europe to the Second World War. Bruno Waterfield and Francis Elliott report: “The force, wearing blue armbands and an EU and agency insignia, would be equipped with naval patrol vessels, helicopters and drones, according to plans tabled yesterday by Jean-Claude Juncker, the European Commission president”.

Almost 18 months ago, UKIP’s leader, Nigel Farage, warned of the plans for an EU army in a big, pre-European Parliamentary Elections debate with then Deputy Prime Minister Nick Clegg.

The Times also reports that a major European summit, due to be dominated by UK Prime Minister David Cameron’s “renegotiation” demands to halt a British exit from the EU, will instead now focus on the plans for the EU army.

The plans include the statement: “In urgent situations, the agency must be able to step in to ensure action is taken on the ground even where . . . that member state considers there is no need for additional intervention”.