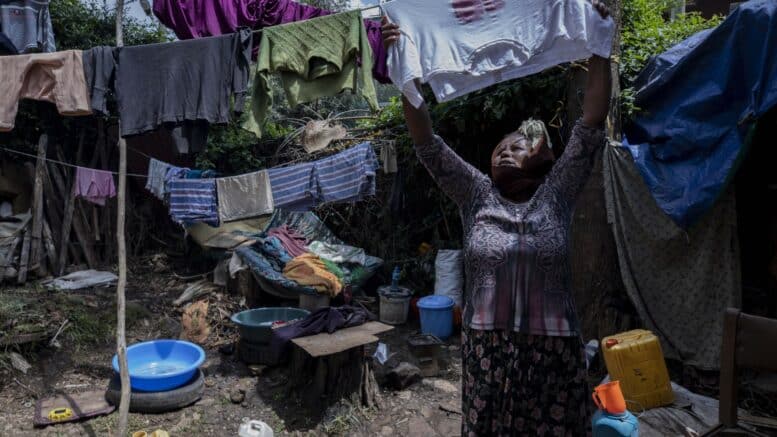 Please Share This Story!
PDF 📄
The global rise of extreme poverty was entirely predictable as Technocrats shut down the entire global economy in response to COVID-19. In the end, it will be hundreds of millions forced to live in abject squalor.

In America, the homeless population is exploding as people are displaced from homes and apartments. This too was fully predictable. This underscores the sheer lack of concern for any other lives except those “saved” from COVID-19. ⁃ TN Editor

As a domestic worker, Amsale Hailemariam knew from the inside out the luxury villas that had grown up around her simple shelter of raw metal and plastic sheeting. And in them, she saw how her country, Ethiopia, had transformed.

The single mother told herself, “Oh God, a day will come when my life will be changed, too.” The key lay in her daughter, just months from a career in public health, who studied how to battle the illnesses of want and hunger.

Then a virus mentioned in none of her textbooks arrived, and dreams faded for families, and entire countries, like theirs. Decades of progress in one of modern history’s greatest achievements, the fight against extreme poverty, are in danger of slipping away because of the COVID-19 pandemic. The world could see its first increase in extreme poverty in 22 years, further sharpening social inequities.

“We are living in a state where we are above the dead and below the living,” Amsale said, near tears. “This is not life.”

With the virus and its restrictions, up to 100 million more people globally could fall into the bitter existence of living on just $1.90 a day, according to the World Bank. That’s “well below any reasonable conception of a life with dignity,” the United Nations special rapporteur on extreme poverty wrote this year. And it comes on top of the 736 million people already there, half of them in just five countries: Ethiopia, India, Nigeria, Congo and Bangladesh.

India is struggling with one of the world’s largest virus caseloads and the effects of a lockdown so abrupt and punishing that Prime Minister Narendra Modi asked the poor to forgive him. Nigeria, Africa’s most populous nation, has surpassed India with the most people in extreme poverty — roughly half its citizens. And Congo remains one of the world’s most crisis-ridden countries, with outbreaks of Ebola and measles smoldering.

Even China, Indonesia and South Africa are expected to have more than 1 million people each fall into extreme poverty, the World Bank says.

“It’s a huge, huge setback for the entire world,” Gayle Smith, president of the ONE Campaign to end extreme poverty, told The Associated Press. Smith, a former administrator for the U.S. Agency for International Development, called the global response to the crisis “stunningly meager.”

Most of the millions newly at risk are in sub-Saharan Africa, a region that against countless odds had some of the world’s fastest growing economies in recent years. The World Bank shared with the AP the earliest data out of Ethiopia as it takes a global measure of the pandemic’s direct effects over several months, showing that the pain is already widespread. Similar efforts are under way in more than 100 countries.

Back in 1991, when Ethiopia began its transformation, the country was exhausted by war. A new leader, Meles Zenawi, was shaking off years of Marxist dictatorship and terrifying drought whose images of withered children left the world aghast. The former rebel had a vision that became his legacy, one of bringing millions of countrymen out of grinding poverty.

Amsale was newly arrived in the capital, Addis Ababa, from what is now neighboring Eritrea, her baby daughter in her arms. For her the child, Bethlehem Jafar, became a tiny symbol of the city’s rise.

Bethlehem benefited from the welfare of the state and the charity of those who saw in her a better future. Her mother scraped by through manual labor, vowing her girl would never do the same.

Fellow Ethiopians were moving up in the world, as the government looked to emulate China’s astonishing lifting of more than 800 million people from poverty. Some embraced new manufacturing jobs. Others left subsistence farms for the growing sectors of hospitality, services and aviation that catered to the changing times, hoping to join Africa’s expanding middle class.