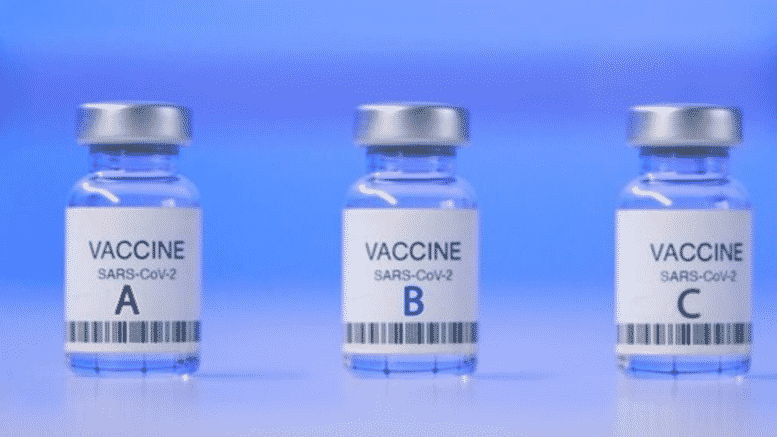 Please Share This Story!
PDF 📄
TN has stated that Big Pharma’s first goal was to get the mRNA/DNA needle into your arm, and then to continue injecting you with a never-ending string of future shots. Thus far, this is exactly what is happening, with the term “fully vaccinated” being redefined on a regular basis. Shots continue to be administered under Emergency Use Authorization. ⁃ TN Editor

It’s time everyone realised they are chasing an intentionally impossible goal that will be pushed back over the horizon, forever.

Yesterday, in a statement to Parliament on the UK’s planned “vaccine passport”, Health Secretary Sajid Javid admitted the NHS Pass would require three shots for you to be considered “fully vaccinated”.

“Once all adults have had a reasonable chance to get their booster jab, we intend to change this exemption to require a booster dose.”

While many of us predicted this would be the case, it is the first time any British politician has actually said it out loud, and in front of parliament too.

This incredibly cynical “evolving definition” of “fully vaccinated” is not a new phenomenon, and is not isolated to the UK either.

Israel changed their definition of “fully vaccinated” to include the booster months ago. New Zealand’s ministry of health is “considering” doing the same, as is Australia.

The EU isn’t far behind either, with proposals in place to make travel dependent on having a third dose.

The US hasn’t formally adopted a new definition yet, but you’d have to be blind not to see the signs. Just yesterday the LA Times headlined:

Should the definition of ‘fully vaccinated’ be changed to include a booster shot?

An article on Kaiser Health News asks the same thing.

Tony Fauci is quoted in the Independent as saying it’s only a matter of time before the definition is updated:

“It’s going to be a matter of when, not if” getting a booster shot will be considered being “fully vaccinated,” Dr Fauci said.

…And it will continue because they know that many people will willingly comply. So sad!
I am a Vendor at a Walmart store and my service area is across from the pharmacy. I have been watching what is going on for some time as people get the shot or a booster.
Just the other day a mother with her little girl was in the aisle broadcasting with excitement how “Mommy is all done…she got the booster.” Yippee! :</ I can tell several more similar stories.

I just have to say. WTF is wrong with people, generally? It seems that between the outright stupid ones and the willfully ignorant go-alongers-keep-us-safe idiots we have an entire planet of stupid lining up to be slaughtered with glee by the self-appointed criminal kings of Earth.

Do they think it’s a privilege? Are they THAT stupid? Are the Aztec or something? I’m agape to say the least.

YOOO Techno dawgs, ya got that right, I’ll never be fully vaxxed because i’ll never get one of your juice shots u cowardly sob. Say it to my face w/o your goon squad around to protect you.

The seemingly endless jabfest has nothing to do with public health. It is about accumulating massive amounts of data – the new oil – to be uploaded to the Blockchain for our future control and exploitation. By accident or design it has also, according WEF head honcho Klaus Schwab opened a “window of opportunity” to implement a Great Reset of Western society – enforced via a high-tech Chinese-style surveillance and control matrix using 5G and Space communications satellites. Mandatory vaccination and associated compulsory electronic identification/vaccine passport systems are core to the digital enslavement of every man, woman and child on… Read more »

If you went along with it thus far and got one, two shots for something 99% of people below average age of death survive, you’re more likely to go along with 3, 4, 5, eternal injections to be allowed to participate in the beast system economy. Some people are realizing they’ve been had and everyone’s got to make up their own mind. Putting faith in this world is a BAD idea which will likely lead to eternal loss and final impenitence. The propaganda mills will keep stoking divisions between the fully indoctrianted and the uninitiated, unclean class as we formlize… Read more »

Sorry, I agree with most arguments against all this nonsense, but as soon as you bring religion into the discussion you lose credibility in my eyes.