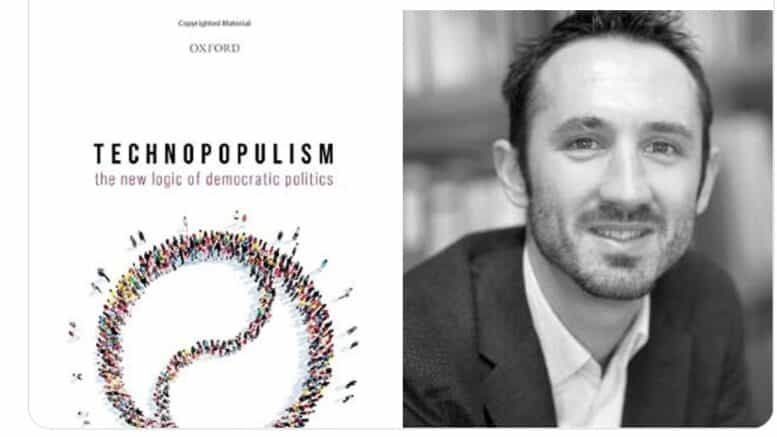 Please Share This Story!
PDF 📄
TN has warned in recent years of the dangers of Technopopulism, or the merging of Populism with Technocracy. The first authoritative book, Democracy by Disclosure: The Rise of Technopopulism by Mary Graham, visiting fellow at the Brookings Institution, appeared in 2002.

Since Populists can only provide limited solutions to the problems they protest against, it is all too easy to turn to Technocrats for answers. ⁃ TN Editor

Christopher Bickerton and Carlo Invernizzi Accetti describe, define, and diagnose what they consider to be a new logic of democratic politics. “Technopopulism” is the merging of populist and technocratic modes of governance.

In this innovative contribution to our understanding of the changing nature of contemporary democracy, authors Christopher Bickerton and Carlo Invernizzi Accetti suggest that democratic politics is “increasingly about competing claims to represent the ‘people’ as whole and to possess the necessary ‘competence’ for translating its will into policy”. Technopopulist politics therefore involves appeals beyond political parties, with an emphasis on leaders who can cut through the messiness of democratic politics and get things done.

The authors’ main focus is not on the type of populists who haunt the progressive imagination, such as Donald Trump, Marine Le Pen, Matteo Salvini, and Victor Orbàn. Refreshingly, Trump barely makes an appearance, given the focus on Western Europe. Instead the main exemplars are Tony Blair and Emmanuel Macron.

Blair and Macron are emblematic of a tendency dates from the late 1990s onward. Both figures sought electoral majorities on the basis of rejecting the “old” politics and claiming to be “unlike the other guys”. Old politics was something to be overcome and replaced, with a logic that suggested that Blair, Macron, and other leaders in this new mould could realise the popular will and translate it effectively and efficiently into policy.

The reason for the rise of this new logic will be familiar from the politics of the past decade: the hollowing out of democracy by professional, rather than mass, parties. The argument runs that these centrist parties formed cartels and competed over an ever-narrower political terrain based on competence to govern rather than any ideologically inspired programme designed to realise the good life for its supporters and other members of the polity. This left a void which populist movements and parties such as the Moviemento Cinque Stelle, Front National, UK Independence Party, and Podemos exploited and filled during the 2010s.

Bickerton and Invernizzi Accetti do not see this new political logic as benign. This is not an analysis that sees populism as an antidote to the technocratic capture of democracy. In fact, they argue that technopopulism lessens the quality of contemporary democracy by narrowing the horizon of possibilities. They point out that technopopulists never claim – despite the title of Macron’s book – to be revolutionary. Instead, they intend only to do what already exists better: make borders stronger; educate better; run cities more efficiently; make America great again.

Having noted technopopulism’s deficiencies, the authors suggest an unfashionable solution: political parties, and in particular their “middle management”, the ideological stalwarts of the party and its operational and organisational heart. If it was the proles who were the great hope in George Orwell’s 1984, then it is the middle managers who play this part for Bickerton and Invernizzi Accetti.

The reason for this is that, in their view, these individuals have attitudes and opinions that are usually more deeply held and extreme than that of the leadership and electorate. As a result, if freed from the undemocratic internal structures of existing parties, the middle managers would help differentiate parties from each other and save us from the scourge of valence politics and its narrowing horizons of political imagination.

There is an immediate objection to this idea: Jeremy Corbyn. The experience of the British Labour Party under his leadership suggests that the differentiation of parties might come at the expense of electability. The other objection is that the idea of turning up to the proverbial branch meeting on a rainy Tuesday night hoping for a quorum is unlikely to excite many people into politics. Despite the authors’ overall idea that parties and other intermediary bodies are both the problem and the solution, as long as they can be democratised themselves, it is a solution worth considering (and one likely to be resisted by the technopopulists).

Bickerton and Invernizzi Accetti have made a novel and significant contribution to the vibrant debate about the pros and cons of populism. They rightly point out that technocracy has not gained as much attention – or opprobrium – as populism. It would, however, have been profitable to see some consideration of the relationship between technopopulism and nationalism. With the exception of some of the Mediterranean populist movements of the early 2010s, it is rare to see a populist movement that has no relationship with nationalism. Even the technopopulist exemplars, Blair and Macron, pitched their appeal in national frames (“New Labour, New Britain” and Macron’s republicanism). This relationship matters because more recent technopopulists such as Boris Johnson have been able to effectively exploit the linkages between nationalism and technopopulism to their (own) political benefit.

The authors’ claim that populism and technocracy are neither political opposites nor cures for each other is innovative and persuasive. By introducing the concept of technopopulism, this book helps us advance our understanding of the relationship between populism and technocracy, and their desirability for democracy, while offering suggestions to move the political imagination beyond the ideational constraints of both.

This is a review of Christopher Bickerton and Carlo Invernizzi Accetti, Technopopulism. The New Logic of Democratic Politics (Oxford University Press, 2021). ISBN 9780198807766.