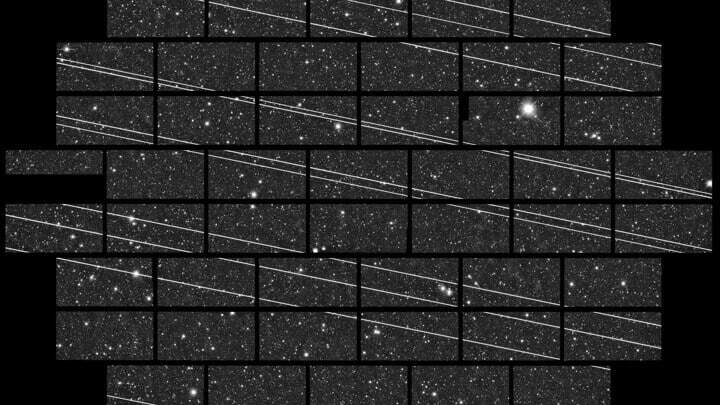 Posted By: Marina Koren via The Atlantic February 7, 2020

Please Share This Story!
PDF 📄
The FCC granted permission for Technocrats Musk and Bezos to launch tens of thousands of 5G satellites into orbit, but the FCC gave no thought to their appearance: shiny, bright and fast moving. Astronomy will never be the same again. ⁃ TN Editor

Last year, Krzysztof Stanek got a letter from one of his neighbors. The neighbor wanted to build a shed two feet taller than local regulations allowed, and the city required him to notify nearby residents. Neighbors, the notice said, could object to the construction. No one did, and the shed went up.

Stanek, an astronomer at Ohio State University, told me this story not because he thinks other people will care about the specific construction codes of Columbus, Ohio, but rather because it reminds him of the network of satellites SpaceX is building in the space around Earth.

“Somebody puts up a shed that might obstruct my view by a foot, I can protest,” Stanek said. “But somebody can launch thousands of satellites in the sky and there’s nothing I can do? As a citizen of Earth, I was like, Wait a minute.”

Since last spring, SpaceX has launched into orbit dozens of small satellites—the beginnings of Starlink, a floating scaffold that the company’s founder, Elon Musk, hopes will someday provide high-speed internet to every part of the world.

SpaceX sent a letter too, in a way. After filing for permission to build its constellation in space, federal regulators held the required comment period, open to the public, before the first satellites could launch.

These satellites have turned out to be far more reflective than anyone, even SpaceX engineers, expected. Before Starlink, there were about 200 objects in orbit around Earth that could be seen with the unaided eye. In less than a year, SpaceX has added another 240. “These are brighter than probably 99 percent of existing objects in Earth orbit right now,” says Pat Seitzer, a professor emeritus at the University of Michigan who studies orbital debris.

For months, astronomers have shared images online of their telescopes’ fields of view with diagonal white streaks cutting across the darkness, the distinct appearance of Starlink satellites. More satellites are now on the way, both from SpaceX and other companies. If, as Musk hopes, these satellites number in the tens of thousands, ignoring them will be difficult, whether you’re an astronomer or not.

In some ways, these satellites pose a familiar problem, a matter of managing the competing interests that scientists, commercial companies, and the public might have in a limited natural resource. But the use of outer space—particularly the part in close vicinity to our planet—has never been tested quite like this before. For most of history, scientists, particularly those who observe the cosmos on visible wavelengths, have had relatively little competition for access to the sky.

Passing satellites were considered nuisances and sometimes wrecked data, but they were rare. Some astronomers are now calling for legal action, but even those who wouldn’t push that far describe Starlink’s satellites as a wake-up call: What happens when new and powerful neighbors have a distinct—and potentially disruptive—plan for a place you value?

For Harvey Liszt, the case of the Starlink satellites feels like déjà vu.

Liszt specializes in radio astronomy, a field that has experienced more than its share of satellite-related headaches. The first GPS satellites, launched in the late 1970s, spewed signals across the radio spectrum, including the bands that astronomers like Liszt use to scan the universe, and interfered with their observations. “Without very strict regulation, it’s all too easy for users of the radio spectrum to spill over into each other’s spectrum,” Liszt says.

So astronomers started pushing regulators to bring GPS technology in line. The United States has controlled use of the radio spectrum since the early 20th century, when it became clear that too much noise could garble emergency messages from ships in distress and other long-distance cries for help. The International Telecommunication Union, which coordinates global use of the radio spectrum, had been established decades earlier, in 1865. By the time radio astronomers had to worry about GPS satellites, the idea that satellite operators had to play by oversight rules was well understood.

Before Starlink launched, SpaceX coordinated with the National Science Foundation and its radio-astronomy observatories to make sure there wouldn’t be any overlap. Unfortunately for optical astronomers, there is no such framework when it comes to the brightness of satellites—no international body in Geneva, let alone a dedicated agency in the United States.

The Federal Communications Commission’s regulatory realm spans communication networks across multiple industries, which means its oversight includes, oddly enough, both satellites and offensive Super Bowl commercials. But while American satellites need the agency’s permission to launch, the FCC does not regulate the appearance of those satellites once they’re in orbit.

The only two problems the world have are Bezos and Musk. Send them both to the moon on a one way ticket.