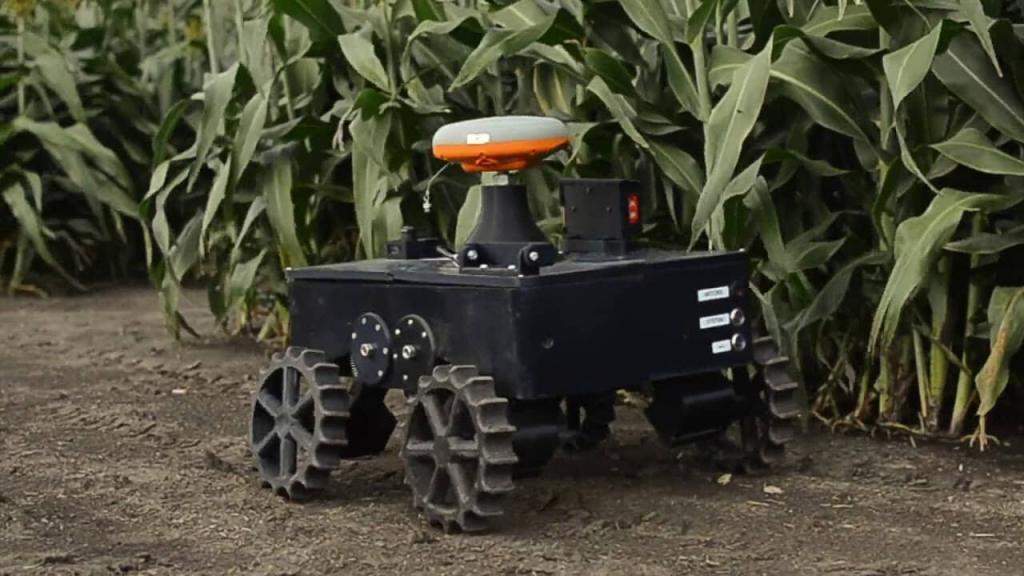 The Future Of Farming Is… Robots?

Advanced technology is rapidly taking over agriculture, which will eventually deliver the entire food chain into the hands of error-prone Technocrats who will only say “Oops!” when a system fails while people starve. ⁃ TN Editor

In a research field off Highway 54 last autumn, corn stalks shimmered in rows 40-feet deep. Girish Chowdhary, an agricultural engineer at the University of Illinois at Urbana-Champaign, bent to place a small white robot at the edge of a row marked 103. The robot, named TerraSentia, resembled a souped up version of a lawn mower, with all-terrain wheels and a high-resolution camera on each side.

In much the same way that self-driving cars “see” their surroundings, TerraSentia navigates a field by sending out thousands of laser pulses to scan its environment. A few clicks on a tablet were all that were needed to orient the robot at the start of the row before it took off, squeaking slightly as it drove over ruts in the field.

“It’s going to measure the height of each plant,” Dr. Chowdhary said.

It would do that and more. The robot is designed to generate the most detailed portrait possible of a field, from the size and health of the plants, to the number and quality of ears each corn plant will produce by the end of the season, so that agronomists can breed even better crops in the future. In addition to plant height, TerraSentia can measure stem diameter, leaf-area index and “stand count” — the number of live grain- or fruit-producing plants — or all of those traits at once. And Dr. Chowdhary is working on adding even more traits, or phenotypes, to the list with the help of colleagues at EarthSense, a spinoff company that he created to manufacture more robots.

Traditionally, plant breeders have measured these phenotypes by hand, and used them to select plants with the very best characteristics for creating hybrids. The advent of DNA sequencing has helped, enabling breeders to isolate genes for some desirable traits, but it still takes a human to assess whether the genes isolated from the previous generation actually led to improvements in the next one.

A blossoming of bots

“The idea is that robots can automate the phenotyping process and make these measurements more reliable,” Dr. Chowdhary said. In doing so, the TerraSentia and others like it can help optimize the yield of farms far beyond what humans alone have been able to accomplish.

Automation has always been a big part of agriculture, from the first seed drills to modern combine harvesters. Farm equipment is now regularly outfitted with sensors that use machine learning and robotics to identify weeds and calculate the amount of herbicide that needs to sprayed, for instance, or to learn to detect and pick strawberries.

Lately, smaller, more dexterous robot have emerged in droves. In 2014, the French company Naïo released 10 prototypes of a robot named Oz that is just three feet long and weighs roughly 300 pounds. It assembles phenotypes of vegetable crops even as it gobbles up weeds. EcoRobotix, based in Switzerland, makes a solar-powered robot that rapidly identifies crops and weeds; the device resembles an end table on wheels. The household appliance-maker Bosch has also tested a robot called BoniRob for analyzing soil and plants.

“All of a sudden, people are starting to realize that data collection and analysis tools developed during the 90s technology boom can be applied to agriculture,” said George A. Kantor, a senior systems scientist at Carnegie Mellon University, who is using his own research to develop tools for estimating crop yields.

The TerraSentia is among the smallest of the farmbots available today. At 12.5 inches wide and roughly the same height, the 30-pound robot fits well between rows of various crops. It also focuses on gathering data from much earlier in the agricultural pipeline: The research plots where plant breeders select the varieties that ultimately make it to market.