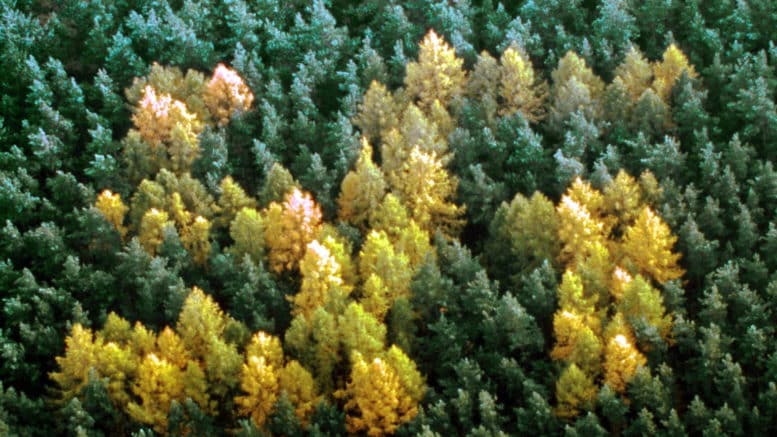 Please Share This Story!
PDF 📄
The roots of the Green New Deal is examined in light of Nazi policy during the 1930s. The modern iteration is as ultra-radical as it was then, and Americans need to make this important historical connection. ⁃ TN Editor

The “Green New Deal” is a fascist utopian plan written by environmentalist lawyers that is purportedly designed to tackle the global warming apocalypse which capitalism, particularly of the American kind drunk on fossil fuels, has precipitated through economic recklessness and colonial racism. CO2, a trace gas measured in parts per million, is the primary culprit of a semi-apocalyptic global warming crisis that can only be averted through an all-wise cadre of Democratic green lawyers. That such utopianism, political legalism, and apocalypticism is presented as hard science demonstrates the general madness of the present time that is largely rooted in the Social Darwinian scientism of the 1800s, wherein German zoologist Ernst Haeckel (1834-1919) was peddling a racist political biology together with strong ecological values that he characterized as Monism — which speaks of a monistic oneness or holism with nature along totalitarian lines that modern science was supposedly offering the constituents of the Second Reich. While Haeckel coined the term “ecology” in 1866, he mixed racial eugenics with his environmentalism. Today, environmentalism proffers anti-humanism, population control, ecological totalitarianism, and indigenous multicultural tribal racism that “The New Green Deal” is chock full of.

Austrian Nazi forester Guenther Schwab (1904-2006) was one of the most successful original popularizers of apocalyptic environmentalism in the 1950s and 60s, which included the CO2 global warming scare. Thanks to the great success of Schwab’s writings, real green Nazis like Werner Haverbeck, August Haussleiter, and Werner Vogel, among others, helped him lay the foundations for the German Green Party in the late 1970s. Yet, it was German researcher Hermann Flohn (1912-97) who took the global warming theory that had been bandied around by earlier European researchers and gave it teeth to increasingly bite its way into the main storyline of the West as the 20th century drew to a close. Flohn is considered to be one of the most critically important climate scientists of the 20th century, whose research merited a number of prestigious awards.

Flohn’s very German odyssey actually began in 1941, when he published an article on global warming titled, “The Activity of Man as a Climate Factor” during the dizzying heights of Nazi rule. The Dust Bowl years of the 1930s on the American plains was an exceptionally warm period that prompted environmental discussion among many Nazis at the time, who deemed such an ecological disaster as a symptom of diseased industrial capitalism which had ruined the soil. While Flohn was not a Nazi Party member, he received his doctorate in 1934 and began work for the German Meteorological Service at a time when National Socialism was attempting to bring into line German universities within its ideological purview. Later, Flohn became the Luftwaffe’s chief meteorologist under green Nazi Hermann Goering’s watch. The great irony is that the global warming of the 1930s came to an abrupt halt (which lasted until 1975) just in time for the 1941 invasion of Russia when the Wehrmacht essentially froze to death just outside the gates of Moscow.

During the war, it stands to good reason that Flohn’s high atmospheric weather research would have not only placed him in close proximity with high-altitude Nazi human experiments, but probably also would have put him in regular contact with Werner von Braun and his SS rocket boys. After the war, Flohn continued to ratchet up the CO2 global warming scare as more dangerous than even nuclear energy. Such connections seem to suggest that the global warming apocalypse may have been originally introduced in a targeted way into American research labs through Operation Paperclip, when SS Nazi and German scientists were imported into the United States to help Uncle Sam build rockets to compete in the Cold War. The SS was the greenest arm of the swastika.

Even as early as 1935, Nazi Germany was the greenest regime on the planet. Their ecological projects worked hand in hand with their wild Social Darwinian biological programs connected to eugenics and scientific racial hygiene. Cleaning up the blood also included cleaning up the environment. Indeed, Nazi biologist Ernst Lehman defined fascism accordingly, “We recognize that separating humanity from nature, from the whole of life, leads to humankind’s own destruction and to the death of nations. Only through a re-integration of humanity into the whole of nature can our people be made stronger. That is the fundamental point of the biological tasks of our age. Humankind alone is no longer the focus of thought, but rather life as a whole… This striving toward connectedness with the totality of life, with nature itself, a nature into which we are born, this is the deepest meaning and the true essence of National Socialist thought.”

Out of such a Nazi holistic nature-based worldview came a number of environmental laws that preceded their more overt racial laws. In 1933, the Nazis passed a strict animal rights law. In 1934 they passed a hunting law.  Along similar lines, the Nazis also introduced sustainable forestry practices, and essentially became the very originators of what is today called sustainable development that included a great concern for recycling. Even the Four-Year Nazi war plan was to be guided by sustainable development concerns. In 1935, the Nazis passed the totalitarian Reich Nature Protection Act which opened the door to ecological regulation over private property.

That same year, American deep ecologist Aldo Leopold visited Nazi Germany to witness their strong emphasis upon green programs they had just put in place. While Leopold had some criticism of the Nazi efforts, he was very complimentary as he said they were not just talking about environmental problems, but actually doing something. Leopold also dragged home the “Never cry wolf” cult to America as Nazi Germany was the first country in the world to protect wolves. In other words, the western bridge between postmodern socialism/fascism and environmentalism originally rooted in the early German green movement of the 1800s was built by National Socialism in the 1930s, long before Rachel Carson’s Silent Spring.

With no small irony, the present strong relationship that currently exists between modern environmentalism and left-wing labor unions was essentially born in Nazi Germany. In June of 1933, green Nazis Rudolf Hess and Walther Schoenichen absorbed many of the environmental groups of the Weimar Republic under Werner Haverbeck’s Folk-Race National Character and Landscape Bund that was a subdivision of the German Labor Front. The German Labor Front thus adopted the greens into their political organization. Nazi architect Albert Speer was proud of his environmental accomplishments as the green builder of the Third Reich who was also another leader of the German Labor Front.

After the war, while biding his time in Spandau prison, Hess often discussed the problems of the free market economy with Speer. Speer had worked under Hess as they were both essentially in charge of Nazi public works projects. Speer noted that Hess loved to critique American capitalism which he called liberal democracy as a form of sickness, “Again and again he comes to me with examples of overconsumption in the United States. He happily notes reports of misguided investments in the market economy, collects examples of land speculation, criminality, bad posture in children and health damage caused by canned foods.”

Hess even came up with a cockamamie sustainable development plan he shared with his fellow Nazi prisoners in 1951. Since highway lamps were being placed above roadways, Hess thought it would be unnecessary for cars to turn their headlights on at the same time. Energy could thus be saved by turning off the headlights when highway lamps were burning. Speer remarked, “This would save current he maintains, and the erection and maintenance of the floodlights could easily be financed out of the money thus saved. I object that the car’s generators would be running anyhow, to supply the current to the spark plugs. He dismisses that; the generator could shut off automatically as soon as the battery was charged. Thus, energy would be stored, fuel saved, and this saving could be spent on financing the illumination of highways.” Such a madness certainly presages the anti-car renewable energy sentiments that have become one of the trademarks of the modern green movement — that is also playing no small role in the Green New Deal as well. In short, to characterize the Green New Deal as fascist is no metaphor.

Enviro Green is (Has been for decades) the new Commie Red. I’ve been saying that since the first Earth Day in 1970, when my friend’s sister and I ditched high school and hitchhiked to Griffith Park for the day. It was all Birkenstock hippies and leftists EVERYWHERE. CPUSA was there with a booth. All the eco orgs were there. (Sierra Club, WWF, etc ad nauseum.) You had to wade through the virtue signaling, and self importance dripped from the tree branches. One was up to their eyebrows in hippie fashion, except for me. I looked more like an outlaw biker,… Read more »

You have to look at your dates very carefully. 1970-72, Nixon had many meetings with Communist governments to end cold war tensions and take down hurdles that segregated U.S. from Communist imperialist policies which threaten U.S.as a free society. Power of America domestic policy transitioned from strong labor union economic policy influence to stronger Fed (Central Bank monetary and economic control) over the economies. Government control from ABC soup organizations like FDA, EPA, BLM, OSHA and NIOSHA were established and assigned top Corporate representatives in charge of setting policies, monitoring and controlling by these established programs. 1971, it was made… Read more »

Relax, man. I just said the first Earth Day, which I meant was as we know it was in 1970, which it was.
I just said Mikhail Gorbachev founded GCI, which he did. I didn’t mention a date for that.
Your info is nice, though.

http://www.academia.edu/25826237/why_the_USA_did_not_join_the_league_of_nations https://www.wdl.org/en/item/11598/ These websites show that both USA and Germany shunned the League of Nations, the forerunner of the United Nations. The present outworkings of the UN 2030 Sustainable Development Goals are far more encompassing than the initial “reuse, recycle, reduce” campaigns for looking after the environment of the early 1980’s. I think it’s good to save and not waste anything because of the burden of (inherited/unexpected) debts, because times might get tougher and money might get scarce. Every generation should try to save. Thus, many of these activities are quite sound and helpful in and of themselves, but the… Read more »