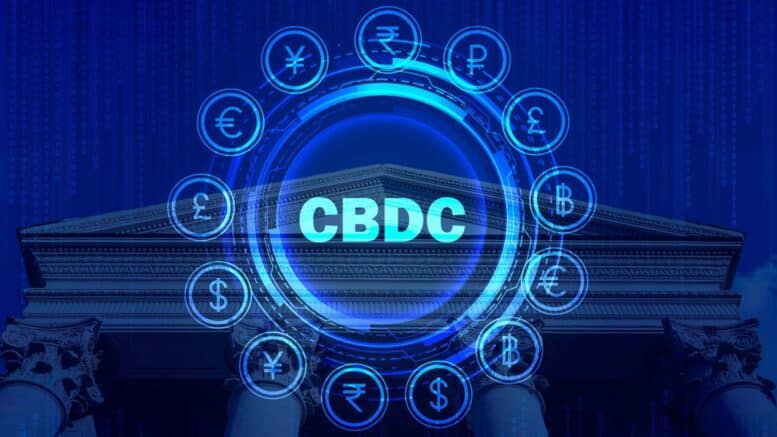 Please Share This Story!
PDF 📄
Like vaccine passports and digital identity schemes, there has been zero public debate over central bank digital currencies as they are rolled out around the world. All global banking institutions like the IMF, World Bank and the Bank for International Settlements, are pushing as hard as they can. ⁃ TN Editor

The move towards central bank digital currencies (CBDCs) “is gaining momentum, driven by the ingenuity of Central Banks.”

As a barrage of Western sanctions visit all manner of pain upon Russia’s economy, attention is turning in some quarters to potential ways of circumventing U.S. economic sanctions in the future. One potential weapon for defanging future sanctions is central bank digital currency (CBDC) networks, according to Lewis McLellan, the digital editor of the Digital Monetary Institute of the Official Monetary and Financial Institutions Forum (OMFIF):

Cross-border central bank digital currency networks are in development across Asia (like the mCBDC Bridge, which involves Thailand, Hong Kong, China and the United Arab Emirates). Russia’s central bank is working on a digital rouble and Governor Elvira Nabiullina has expressed interest in its value as a means of facilitating cross-border payments, particularly with China.

The digital yuan could also be pressed into service. It is widely usable within China and is likely to be accepted by anyone with costs or liabilities in China. Even dollar stablecoins, which are growing in scale and importance, could help form the backbone of a payments network that cannot be curtailed by revoking access to Swift or the Fed’s clearing system. There is no evidence that China intends to help Russian businesses circumvent sanctions — they are likely to face their own sanctions if they do — but if the dollar payments network is becoming a tool of foreign policy, it adds a new sense of urgency for some to develop an alternative.

The digital renminbi is the first CBDC to be issued by the central bank of a major economy and has been undergoing public testing since April 2021. China’s testing of CBDCs has so far taken place in ten cities and regions (Shenzhen, Suzhou, Chengdu, Xiong’an, Shanghai, Hainan, Changsha, Xi’an, Qingdao and Dalian). According to Chinese state-backed financial media outlet Securities Times, Beijing is on the verge of launching trials of its digital yuan currency in a third batch of localities, which could include Henan, Fujian and Heilongjiang provinces, and the cities of Guangzhou, Chongqing, Fuzhou and Xiamen.

China’s central bank has been exploring the possibilities offered by digital currencies since 2014. Those possibilities include reduced operating costs, increased efficiency and “a wide range of new applications,” said Fan Yifei, a deputy governor of the PBOC, in 2016. A year later, the State Council of the People’s Republic of China gave its blessing to the development of the digital RMB. Commercial banks were invited to participate in the project, as too were Chinese tech giants Tencent, Alibaba, Huawei, JD.com and UnionPay.

The digital renminbi has since been flagged as a “national security issue” threatening the U.S. dollar by Josh Lipsky, a former IMF staffer who is now at the Atlantic Council, an influential U.S. think tank. Yet the People’s Bank of China is hardly what you would call an outlier when it comes to experimenting with or piloting a digital upgrade of its national currency.

In total, 87 central banks in economies representing 90% of global GDP are currently at it, including the Federal Reserve, the European Central Bank, the Bank of Japan and the Bank of England. The Reserve Bank of India recently announced that it will introduce a digital rupee in the coming financial year (April 2022 to March 2023). Three CBDCs have actually gone fully live in the past two years: the so-called DCash in the Eastern Caribbean, the Sand Dollar in the Bahamas and the eNaira in Nigeria, whose impact so far has been pretty underwhelming, as the technology news website Tech Monitor reports:

Almost as soon as it was launched, users complained of poor functionality and the app was briefly withdrawn from the Google Play Store for improvements. By January, only 694,000 eNaira wallets had been downloaded (the e-Yuan, by contrast, remains in its pilot stage but boasts some 260 million users). Spending also remained low, with $450,000 worth of transactions recorded.

IMF Firmly on Board

As one might expect, the International Monetary Fund (IMF), the world’s most important supranational financial institution, is deeply involved in this process, including by providing technical assistance to many of its members. Speaking at an event organized by the Atlantic Council last month, the IMF’s President Kristalina Georgieva outlined the potential benefits of CBDCs while heaping praise on the “ingenuity” of central banks:

We have moved beyond conceptual discussions of CBDCs and we are now in the phase of experimentation. Central banks are rolling up their sleeves and familiarizing themselves with the bits and bytes of digital money.

These are still early days for CBDCs and we don’t quite know how far and how fast they will go. What we know is that central banks are building capacity to harness new technologies—to be ready for what may lie ahead.

If CBDCs are designed prudently, they can potentially offer more resilience, more safety, greater availability, and lower costs than private forms of digital money. That is clearly the case when compared to unbacked crypto assets that are inherently volatile. And even the better managed and regulated stablecoins may not be quite a match against a stable and well‑designed central bank digital currency.

We know that the move towards CBDCs is gaining momentum, driven by the ingenuity of Central Banks.

All told, around 100 countries are exploring CBDCs at one level or another. Some researching, some testing, and a few already distributing CBDC to the public.

In the Bahamas, the Sand Dollar—the local CBDC—has been in circulation for more than a year.

Sweden’s Riksbank has developed a proof of concept and is exploring the technology and policy implications of CBDC.

In China, the digital renminbi [called e-CNY,] continues to progress with more than a hundred million individual users and billions of yuan in transactions.

And, just last month, the Federal Reserve issued a report that noted that “a CBDC could fundamentally change the structure of the U.S. financial system.”[i]

As you might expect, the IMF is deeply involved in this issue, including through providing technical assistance to many members. An important role for the Fund is to promote exchange of experience and support the interoperability of CBDCs.

[…] Read More: The IMF Is Firmly On Board For Central Bank Digital Currencies […]

The IMF Is Firmly On Board For Central Bank Digital Currencies -