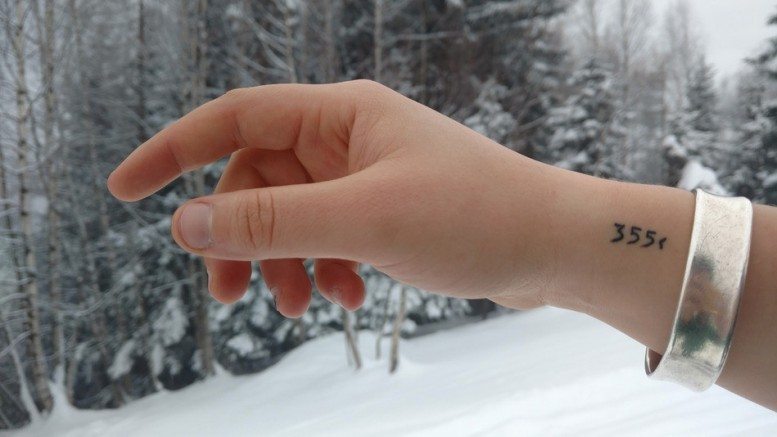 TN Note: This climate activist explains, “It has been said that for the climate movement, COP21 marks the “end of the beginning.” With this rite of passage marked forever on my body, and my continued dedication to climate justice, I now know that for my 24 years on Earth, it’s the end of the beginning as well.”

“Climate justice links human rights and development to achieve a human-centered approach, safeguarding the rights of the most vulnerable people and sharing the burdens and benefits of climate change and its impacts equitably and fairly. Climate justice is informed by science, responds to science and acknowledges the need for equitable stewardship of the world’s resources.”

What if the science is faulty? What if the activists are misinformed? Do you still divvy everything up according to your perception of “equitable stewardship”?

I never imagined I would get a tattoo during the U.N. Climate Summit in Paris. Yet here it is, newly healed and permanently inked on the inside of my right wrist.

The tattoo is three numbers and a symbol: “355<” in 25-point font, styled as if from a typewriter. It’s my commitment to the people of the climate movement, to listening to and sharing their stories of climate justice.

When I was born in October 1991, the concentration of carbon dioxide — the primary greenhouse gas emitted by human activity — in our atmosphere was 355 parts per million. In the early 20th century, we topped 300 ppm for the first time in 800,000 years, beginning the destabilization of our climate and society through rising planetary temperatures.

I never knew these exact numbers before, but now that they’re printed on my wrist, I will never forget.

The U.N. Framework Convention on Climate Change (UNFCCC) — the first international climate treaty — came into force in March 1994 in order to stabilize the concentration of these greenhouse gases in our atmosphere. It brought together all nations to “prevent dangerous anthropogenic interference with the climate system” that would “adversely affect natural ecosystems and humankind.”

In 2008, nine of the world’s leading climate scientists determined 350 ppm to be that safe upper limit for our climate. Today, nearly a month after a new international climate treaty was drafted at COP21, we’re hovering around 402 ppm.

For me, climate change is everything these numbers are not. While there is direct causality between parts per million, climate disruption and human suffering, it’s not the numbers that capture the heart. The < symbol on my wrist is a reminder: Data informs, but stories awaken.

I learned this while traveling to Paris over the course of five months, cycling and story-gathering in 11 countries with artist Garrett Blad. Our journey was fueled by tales of courageous mobilization, from First Nations peoples standing in front of fracking trucks in New Brunswick to thousands of people flooding a coal mine with their bodies in Germany.

Another whacko lefty lose on earth. I wish they would become an extinct species. Clinate change founded in science? Yeah, fake, fraudulent science. How did you get to the summit in Paris? Fly by airplane?? Hmmmm. And how much did you and all the participants of this summit contribute to polluting the earth. You are all a bunch of demented frauds.

Actually, this activist biked through Europe across two continents to get to paris. And if you can’t critizise the system while being in the system, we’ll never have any change.