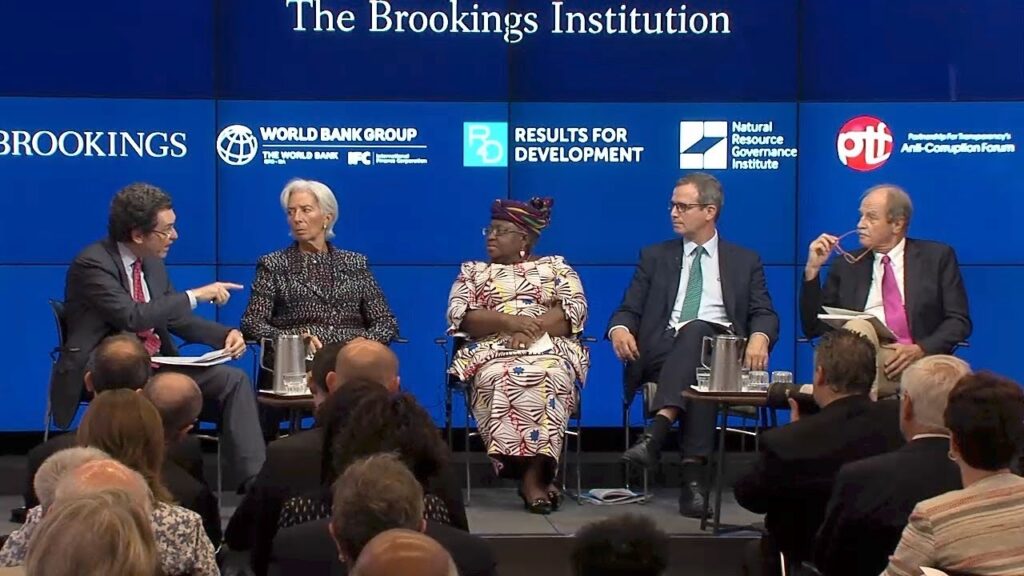 Strobe Talbot is President of the Brookings Institution and a key member of the Trilateral Commission. Rep. Devin Nunes (R-CA) has exposed Talbot as being a key player in the thoroughly debunked Russian “Steele dossier” against Trump.

Since the founding of the Trilateral Commission in 1973, The Brookings Institution has been a key think-tank for globalization and Sustainable Development, aka Technocracy. During the 1970s and 80s, Brookings had no less than seven members of its board of directors who were also members of the Commission: William T. Coleman, Jr., Henry D. Owen, Gerard C. Smith, C. Fred Bergsten, Graham T. Allison, Jr. Philip H. Trezise and Bruce K. MacLaury. ⁃ TN Editor

Rep. Devin Nunes (R-CA) accused the far-left-leaning Brookings Institution think tank and its leadership in disseminating the discredited anti-Trump dossier, defending its credibility and possibly even being involved in its very creation.

In an interview with Fox News on Tuesday, the top Republican on the House Intelligence Committee accused the head of the Brookings Institution, Strobe Talbott, of being directly involved in the anti-Trump dossier and stated he is examining “the three ‘D’s” of the dossier: its development, dissemination, and defense. “They [the Brookings Institution] were involved for sure in the dissemination and for sure in the defense of the dossier. We just don’t know yet were they also involved in the development,” Nunes said, adding it would be a “major” part of the story.

Speaking with Fox News’s Maria Bartiromo on Wednesday, Nunes highlighted how a court case in London involving Christopher Steele — the former MI6 agent who created the debunked Russia-Trump dossier — exposed direct links between Steele and the leadership of the Brookings Institution, and the possible creation of the dossier between Steele and the Brookings Institution leadership.

Nunes cited text messages between Steele and Strobe Talbott, then president of Brookings, leading him to question “what on earth was the president of Brookings doing texting back and forth to Steele, why was he accepting the dossier?” Nunes further questioned whether any of Steele’s sources came from Brookings, adding that the left-leaning institute has a lot to answer for.

London court for defamation. A memo in the discredited dossier accused Gubarev of using WebZilla, a tech company he owns, to facilitate hacks against Democrats.

Talbot was friends with Bill Clinton when the two were students at Oxford, with Talbott eventually becoming a special adviser to the secretary of state during the first Clinton administration. Later, when Hillary Clinton served as secretary of state, she created a board of outside advisers and installed Talbott as chairman.

In one text message, Talbot called Steele “out of the blue in August 2016,” inquiring about Steele’s work at the time and offering him advice if needed:

Mr. Talbott telephones Mr Steele out of the blue in August 2016, having heard about his work and offers advice if needed.

In another text message after the elections, Steele asked Talbot how he wanted to handle “the package” (the dossier) that he received a copy of on Nov. 2 or Nov. 3 to “discuss with John Kerry and other officials at the State Department.”

“Dear Strobe, I know this is not straight forward but we need to discuss the package we delivered to you the other week, and sooner the better. What you thought of it, what you did with it, how we (both) should handle it and the issue it highlights going forward etc.,” Steele wrote on Nov. 12, 2016, according to Caldecott.

Testifying before the House Intelligence Committee on November 21, 2019, as part of the then impeachment inquiry into President Donald Trump, former White House adviser Fiona Hill described to Nunes how she received a copy of the dossier from Talbot — then President of the Brookings Institute — the day before BuzzFeed published it on January 10. Hill, previously a senior fellow at the Brookings Institution before joining the Trump administration, also mentioned how she met with Steele in 2016 prior to elections.

A partial transcript from the hearing reads:

NUNES: OK. Dr. Hill, in your testimony, you said that – no, in your deposition, excuse me, that Christopher Steele was your counterpart at one time. Is this correct?

NUNES: You testified that you met with Christopher Steele in 2016. I assume that’s still correct?

NUNES: And the only thing we didn’t get on that is do you know about when that was in 2016 and how many times?

HILL: I’m afraid I don’t. I actually met with him – well you asked me actually in a deposition when the most recent time that I had met with him in 2016 and he retired from the British Intelligence Services in 2009, which is the same time …

NUNES: But you don’t remember the date?

NUNES: OK. You stated in your deposition that a colleague had showed you the Steele dossier before it was published. Who was that colleague?

HILL: That was one of my colleagues at the Brookings Institution.

NUNES: And who – who was that?

HILL: That was the Brookings Institution President Strobe Talbott, who had been sent a copy of this.